The New York Times columnist's logic on Syria makes no sense at all, especially considering his previous reporting 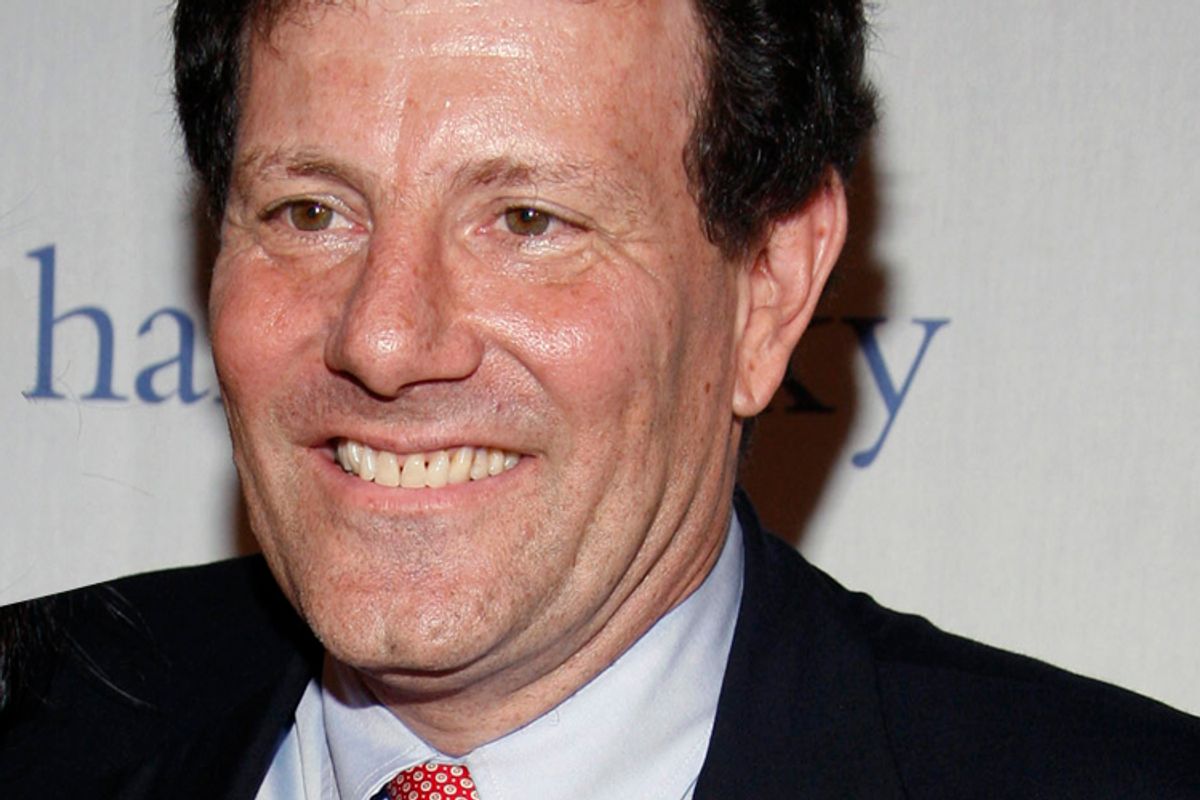 I’ve generally appreciated Nicholas D. Kristof and the earnest reports he has filed for the New York Times from hellholes around the world on tragedies suffered by people Americans would otherwise never hear of, including victims of human trafficking, ethnic cleansing and rape as a tactic of war.

But I will never forget that in 2002 he also offered qualified support to Bush administration plans to invade Iraq, while, puzzlingly, in the same lines, detailing the quagmire of mayhem and sectarian violence likely to ensue. We know how things turned out there.

Then in 2011 Kristof wrote in favor of establishing a no-fly zone in Libya, cautioning us against the “risks of inaction” and asking us not to “psych ourselves out” worrying about the results. It would have been better if we had psyched ourselves out. A U.S. ambassador, Christopher Stevens, is dead, as is our latter-day ally, Libyan leader Moammar Gadhafi; armed militias roam the streets; al-Qaida has set up shop; and Islamists fleeing south helped take over northern Mali, with disastrous consequences only a French military intervention could reverse -- and possibly only temporarily.

Now, once again, with the Obama administration pounding the war drums for Syria, Kristof has returned to his computer console and tapped out a column declaring that country to be “the world capital of human suffering,” and urging us to get with the president’s program – that is, firing Tomahawk missiles at people who haven’t attacked us, and whose dictatorial regime may well be the only thing standing between the chaotic status quo of civil war and a future as an al-Qaida-ruled state bristling with chemical weapons and bordering vital U.S. allies. Kristof’s designation of Syria as the planet’s most grievously afflicted country is disingenuous; he knows better. So what is he really up to?

Let’s look at what he says. He begins his piece with reminiscences of touring the killing fields of Hama in 1982, where Bashar Assad’s father, Hafiz, had just crushed an Islamist uprising and killed 20,000 people. Two Syrian officials Kristof met on the site back then, surely fearing for their lives if they spoke of the massacre to a foreigner, professed not to see anything.

“It feels to me a bit as if much of the world is reacting the same way today,” Kristof writes.

This isn’t true; the historical backdrop is entirely different now, 12 years after 9/11, with a bloody, expensive, inconclusive war in Iraq behind us and the carnage in Afghanistan continuing. Few Americans have any desire to catapult their country into yet another Middle East war. Their aversion stems from a thoroughly justified dread of still more American soldiers coming home in coffins, more billions spent on bombings abroad when 48 million are on food stamps at home, and fear of an outcome that could involve unpredictable conflict with Syria-allied Russia, war with Iran, disruption of oil shipments coming out of the Persian Gulf, and further economic crisis.

Kristof goes on. “On top of the 100,000-plus already killed in Syria, another 5,000 are being slaughtered monthly ...  The rate of killing is accelerating.” If we do nothing, he warns, we in effect “acquiesce as the slaughter in Syria reaches perhaps the hundreds of thousands or more.” His solution: “a limited cruise missile strike against Syrian military targets (as well as the arming of moderate rebels)” that “probably” would “degrade the ability of the army to use chemical munitions and bomb civilian areas ... reinforce the global norm against chemical weapons, and — a more remote prospect — may slightly increase the pressure on the Assad regime to work out a peace deal.”

“Probably”? “Slightly”? “Remote”? These are important qualifiers, or, rather, disqualifiers. Just how a “limited” strike that may or may not “degrade” (Obama’s word too) Syria’s military capabilities would end the slaughter of “hundreds of thousands or more” Kristof does not say. But he rules out potential alternatives to our hurling missiles -- the United Nations, the Arab League, peace talks and the International Criminal Court. That leaves the “indispensable nation” in former Secretary of State Madeleine Albright’s words, or according to Assad’s 2009 announcement (back when the State Department hailed him as a “reformer”), the United States, for which, he said, “there is no substitute.”

Kristof recognizes that his is a “minority view,” especially when one consults opinion polls, and more specifically, a January 2013 Pew Research Center survey that found 83 percent of Americans want the president to focus on domestic, not foreign, affairs. Pew sleuthing also determined that 54 percent wanted “stable governments, even if there is less democracy” in the Middle East. But Kristof misleadingly casts the mass opposition to further foreign misadventures as based on ignorance. To do so, he brings in another Pew report that showed widespread American misperceptions about the U.S. budget, and drawing a false equivalency between the two studies.

Kristof decries U.S. “passivity.” Can you guess what it might lead to? What else? Some sort of repeat, he implies, of World War II. (He’s singing on tune here: Kerry has already likened Assad to Hitler.) Kristof admits that a sort of “murkiness” about the path he advocates clouds the future, so he counsels us to look to the past: “Some military interventions, as in Sierra Leone, Bosnia and Kosovo, have worked well. Others, such as Iraq in 2003, worked very badly. Still others, such as Libya, had mixed results. Afghanistan and Somalia were promising at first but then evolved badly.”

Well, the British intervened in Sierra Leone, not the United States, and again, did so against a different historical backdrop. Kosovo is now a cesspool of criminality, ethnic tension, human trafficking and illegal organ harvests. Libya’s “mixed results” I’ve described above. And it’s somewhat understating things to say that Afghanistan and Somalia “evolved badly” if any sane observer would agree that the U.S. interventions there were “promising at first.”

Kristof blunders into a conclusion that left me shaking my head: “If we were fighting against an incomparably harsher dictator using chemical weapons on our own neighborhoods, and dropping napalm-like substances on our children’s schools, would we regard other countries as ‘pro-peace’ if they sat on the fence as our dead piled up?”

Can he seriously have forgotten, or hope that his readers won’t remember, the United States’ very real napalming of Vietnam? And would Americans, in the somewhat improbable event that their own government bombed them with chemical agents, really want “other countries” – say, Russia – intervening to “save” them? What would come afterward?

This leads us back to Kristof’s designation of Syria as the “world capital of human suffering.” In his columns, he himself has documented the macabre orgy of rape, rampage and spoliation of mineral resources that has raged for the past 17 years in the eastern reaches of the Democratic Republic of the Congo and cost 7 million lives. Reporting from Bukavu in 2010, Kristof called the Congo “the world capital of rape, torture and mutilation,” and, in the article’s headline, the “World Capital of Killing.” The conflict in the Congo remains neglected by all, and only rarely, and never for long, surges into the back pages of the major U.S. dailies. With 7 million dead in the Congo versus a hundred thousand or more in Syria, which country deserves infamy as the “world capital of human suffering?” Surely Kristof knows.

Rather than getting behind Obama’s plans to bomb Syria, Kristof might instead use his influential position at the Times to remind the president of his constitutional duty to enforce the law, including the first bill he had passed as senator (with Hillary Clinton as co-sponsor), Public Law 109-456, aka the "Democratic Republic of the Congo Relief, Security, and Democracy Promotion Act of 2006." This legislation obligates the State Department to withhold aid to countries destabilizing the Congo – as U.S.-funded ally Rwanda has long been doing. Yet Obama has done nothing to help end the immeasurably worse suffering in Central Africa’s largest country.

Kristof followed up with a posting, "Readers School Me on Syria," that only compounds the damage he has inflicted on his reputation with his Op-Ed. He should “school” himself before lunging into print with a risky call to arms, and not ask his readers to do his job for him.

This brings us to Kristof’s motives. Could he seriously believe that Obama’s “limited strikes,” so hedged, so qualified, by both the president and himself, will actually work to stop the killing? Intelligent as he is, I doubt it. Or could he have espied a moment to curry favor among the powerful, as so many big-time journalists have done before all the United States’ other calamitous irruptions into the affairs of other countries? Taking Obama’s side now, when so few in the press (or the public) are doing so, might one day earn him a nice pat on the head from the commander in chief.

Reason admits of only one conclusion.

No matter how Obama's drive to go to war against Syria turns out, Kristof, in publishing such a speciously argued piece, gives every indication of having capitulated to power. A sad fate for a journalist who had done much good.