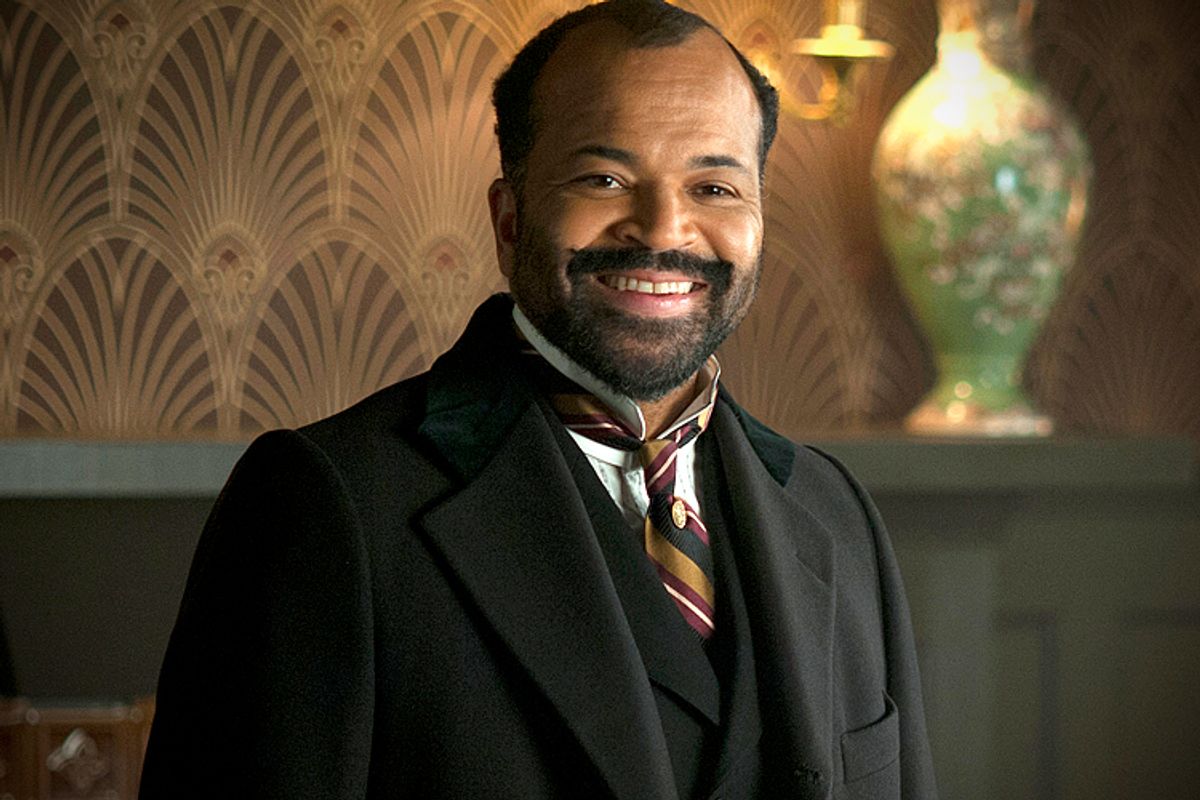 Last week, apropos of almost nothing, the Asian guy behind the counter at my local hardware store asked me if I had gone to Howard University. Considering that there were roughly 1.3 million African-American undergrads in this country when I was in school, and the D.C.-based HBCU to this day only holds about 10,000 students, it seemed like kind of a ridiculous assumption. But I thought nothing of it. (Considering I was wearing track pants in the middle of the day and shopping for bug spray, I was just glad he assumed I went to college at all.)

I thought about the clerk's comment later, though, when I was watching an advance of Sunday night's "Boardwalk Empire." Mild spoiler time: The episode introduces the character of Dr. Valentin Narcisse played with barely concealed glee by the stellar Jeffrey Wright ("Boycott," "Hunger Games: Catching Fire"). Narcisse first appears, ironically, as a white knight rushing to the aid of a Caucasian woman who claims she was raped and subsequently made into a widow by one of Chalky White's (Michael K. Williams) more despicable employees. No surprise on "Boardwalk," the pretense of virtue is false. The good doctor is revealed to be the kingpin of Harlem's numbers racket come to Atlantic City looking to snag a portion of White's burgeoning nightlife action.

Despite their commonalities -- White's Onyx Club serves only white patrons --Valentin Narcisse and Chalky White are positioned as polar opposites. White is dark-skinned and comes from humble beginnings. He speaks pigeon English and makes his employees read aloud letters addressed to him. Valentin Narcisse is of much lighter complexion, and, though he does so with a faint Trinidadian accent, quotes the Bible -- and himself -- with great eloquence.

"Boardwalk Empire" is unrelentingly a show about power play. Narcisse's and White's struggles to keep what they deem their own is no different than Nucky Thompson and Arnold Rothstein's tense but oh-s0-polite negotiations or Al Capone's open challenges to anyone else vying for a slice of Illinois. However, for a show where even a fan like myself must admit the constant posturing, pushing and pulling -- and murdering -- can get a little redundant, the White-Narcisse conflict possesses a bit of extra flavor. It is steeped in conflict that has existed among African-Americans since slavery: educated versus uneducated, Southern versus Northern, light versus dark.

And this is where the hardware store guy's remark nibbled at me. While watching White and Narcisse square off, I knew I was missing out on some of the historical context. Many of my closest friends went to historically black universities, Howard, specifically. I went to the University of Southern California, which ain't exactly Morehouse. My parents are older and did not participate actively in the civil rights movement. Though they experienced plenty of race-related tribulation growing up in the rural South and migrating north, they chose not to burden their children with those stories. To be blunt, I've always felt at a disadvantage when it came to discussing my own people's history. Certainly, this personal failing could have been easily remedied years ago by reading more Frederick Douglass and less Douglas Adams, but after a while it just became one of those amusing things about a person: Boy, that Neil doesn't know much about baseball -- or Black Nationalism!

And so it was that I did not immediately recognize the undertones of black nationalism and Pan-Africanism written into some of Narcisse's earliest lines. More spoilers: In his and White's wonderful first exchange, Narcisse refers to his fellow black man as a "Libyan," to which White responds, "Oh, I'm from Texas." Narcisse's exceedingly poetic rejoinder could have been cribbed straight from the teachings of Marcus Garvey: "Our roots go deeper than that -- across oceans to the mother continent where all things begin."

Jeffrey Wright, himself, has revealed that his character is based roughly on Casper Holstein, a notorious Harlem hustler from the 1920s who did have both a philanthropic side and a bit of a black power bent. Add to the mix a bit of the soul and semblance of W.E.B. Dubois (I looked him up) and you get this part preacher, part criminal who refers to himself as another "child of God," teaches self-determination, and despises miscegenation. At his core, though, Narcisse is a coldhearted opportunist and a wicked manipulator, perhaps even more so than Nucky -- who is ultimately his true nemesis.

I've never quite felt comfortable with the character of Chalky White. His presence always felt forced, peripheral to the story, as if the show runners recognized the need to shoehorn a black character into their vision of this era, but weren't quite sure what to do with him. This season, Chalky White literally comes into his own. His lively, much-coveted nightclub is the center of plenty of action. But just as soon as he has risen to respectable heights, his ascendance is challenged by an opponent who has already settled on a path right through him. Narcisse's language and affect confound White. There is a palpable sadness to their scenes together. Valentin Narcisse is smarter, better connected and ultimately dirtier than Chalky White, which, in the "Boardwalk Empire" universe, is the whole ballgame. It doesn't take a Howard education to recognize that.