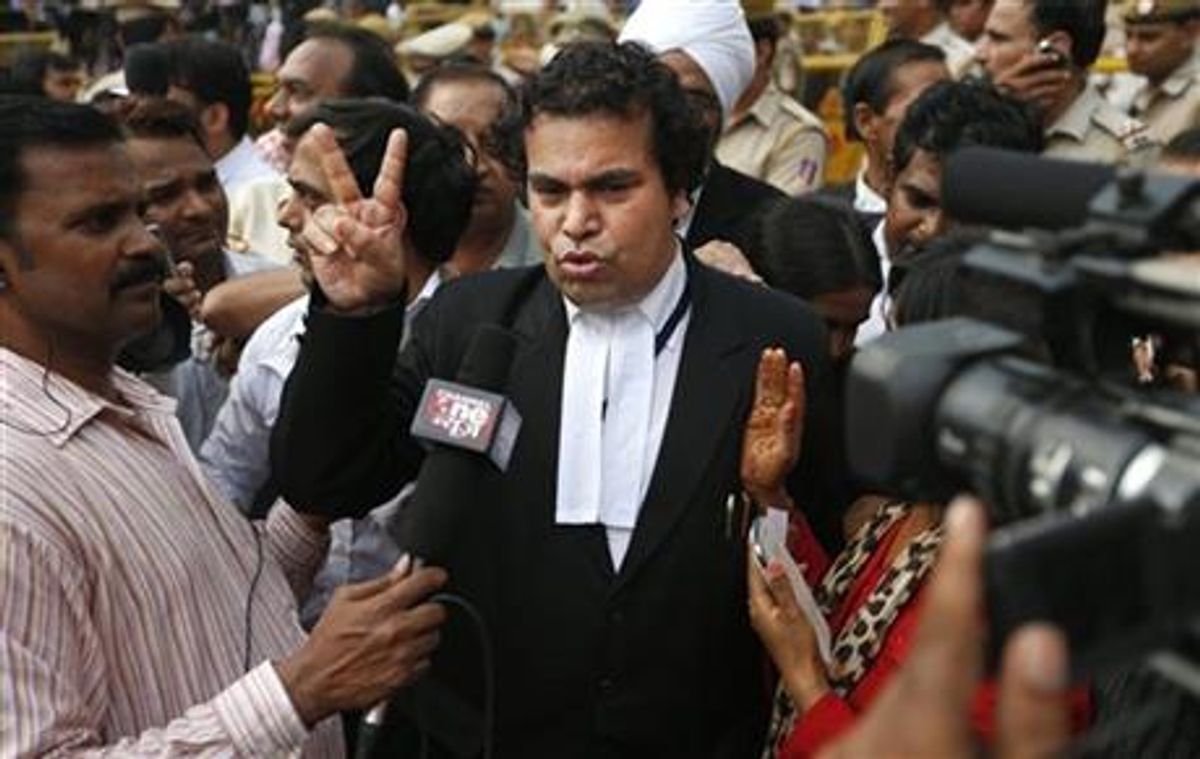 An unidentified lawyer from the prosecution side displays a victory sign as he speaks to journalists after a judge pronounced death sentence for all four men convicted in the rape and murder of a student on a moving New Delhi bus last year, in New Delhi, India, Friday, Sept. 13, 2013. The judge on Friday ordered all four to the gallows for a brutal attack on a bus that left the young woman with such severe internal injuries that she died two weeks later. (AP Photo/Saurabh Das)
--

NEW DELHI (AP) — An Indian court Friday sentenced to death four men for the December gang rape and murder of a young New Delhi woman, ordering them to the gallows for a brutal attack that riveted India, where it became a symbol of the rampant mistreatment of women and the government's inability to deal with crime.

Issuing his decision, Judge Yogesh Khanna said the attack "shocked the collective conscience" of India. "In these times, when crime against women is on the rise, the courts cannot turn a blind eye toward such gruesome crimes."

After the death sentence, the wail of one of the four men, 20-year-old Vinay Sharma, filled the tiny courtroom. Sharma, an assistant at a gym, then broke down in sobs.

As Khanna walked from his bench, defense lawyer A.P. Singh, who has defended all four men at various times, began to shout at him: "This is not the victory of truth. But it is the defeat of justice."

Like all death sentences, Khanna's order must be confirmed by India's High Court. The men can appeal their case to the High Court, as well as to the Supreme Court, and ask the president for clemency.

The victim's family, along with numerous politicians and government officials, had long called for the men to be executed. The family was in the courtroom as the sentence was announced, and were relieved at the results. "I am very happy our girl has got justice," said the victim's father, who cannot be named under Indian laws guarding his daughter's identity as a rape victim.

The 23-year-old victim and a male friend — by all accounts they were not romantically involved — were coming home from an evening showing of the movie "Life of Pi" when the men lured them into boarding a bus they were joy-riding through the city. They quickly beat the friend, held the woman down and took turns raping her. They also penetrated her with a metal rod, causing the injuries that led to her death in a Singapore hospital.

India's Supreme Court has ruled that the death penalty should be used only in "the rarest of rare cases," though what defines those cases remains highly debated. Only two people — both terrorists — have been executed in India since 2004.

Under intense pressure, the Congress party-led national government worked hard to project a tough-on-crime image after the attack, reforming a series of laws on sexual violence. Many in the Congress, which faces dwindling support and national elections next year, had made clear they wanted the men to be executed.

Home Minister Sushilkumar Shinde, who earlier in the week had said death sentences were assured in the case, welcomed the sentence. "The victim and her family have got justice.," he told reporters in New Delhi. "The judge has set an example for anti-social elements that they would meet a similar fate if they committed such crimes."

If India's chaotic judicial system is supposed to be independent of politics, Singh, the defense lawyer, saw a political hand in the judge's decision.

"The judge has given the death sentence under political pressure," he said. "The punishment has been given at the government's insistence. "

An estimated 100 and 150 people are sentenced to death in India in most years, but the vast majority of those cases are eventually commuted to life in prison.

The defendants, like the rape victim, lived on the bottom rungs of India's booming economy. Nearly all came from families that had moved to New Delhi in recent years from desperately poor rural villages, hoping to find well-paying jobs in the capital. Few had such luck.

One, Mukesh Singh, occasionally drove the bus where the crime occurred and cleaned it. Sharma, the gym assistant, was the only one of the attackers to graduate from high school. Akshay Thakur, 28, occasionally worked as a driver's helper on the bus. Pawan Gupta, 19, worked in a streetside fruit stall.

With them on the bus were two other men. Police say Ram Singh, 33, hanged himself in prison, though his family insists he was killed. Another man — an 18-year-old who was a juvenile at the time of the attack and cannot be identified under Indian law — was convicted in August and will serve the maximum sentence he faced, three years in a reform home.

The young woman, though, was trying to escape the economic mire she had been born into. Her father supported five people — his wife, the woman and two younger sons — on a little over $200 a month working as an airport baggage handler.

But while women remain second-class citizens in most Indian families, expected to stay home and care for their parents and then their husbands, her parents and brothers had supported her as she worked for an education, even breaking with tradition by helping her leave her home for a time to study physiotherapy.

At the time of the attack, she was awaiting exam results for a physiotherapy degree. The results came after her death. She had passed.