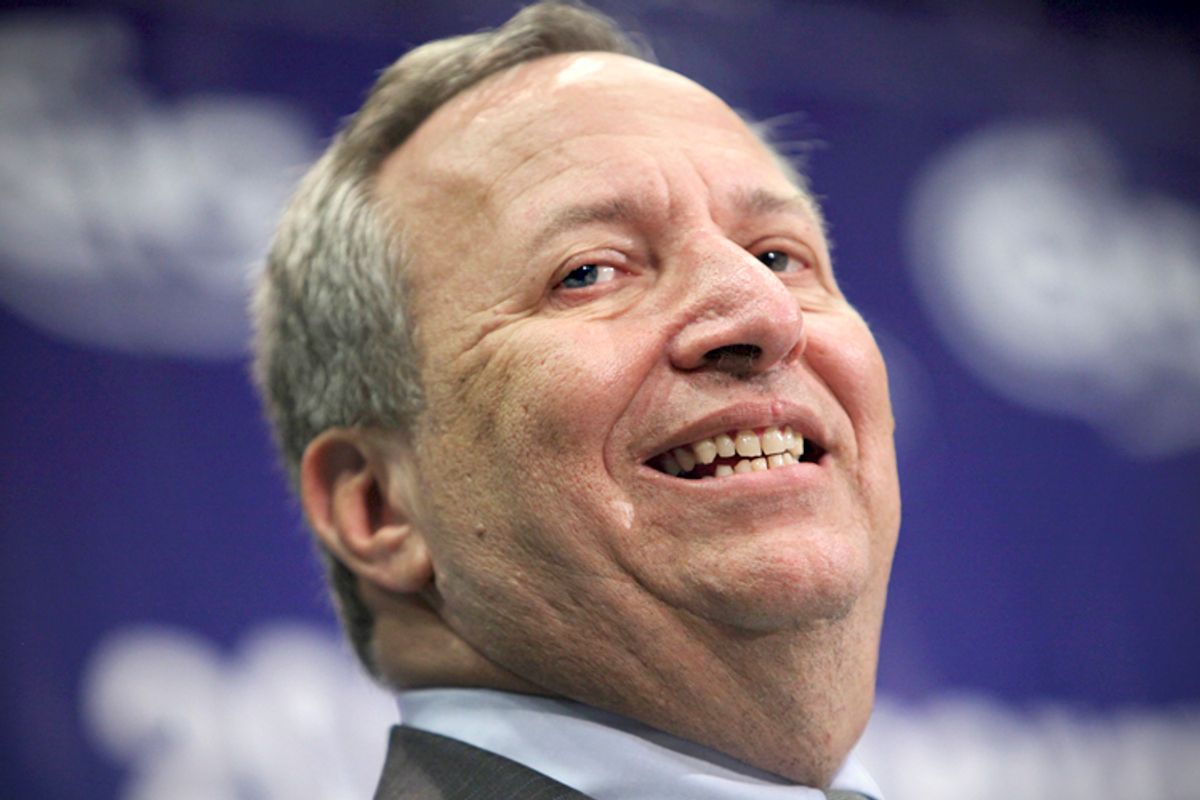 Japan's Nikkei newspaper reported today that President Barack Obama will name Lawrence Summers the next chairman of the Federal Reserve "as early as late next week," according to Reuters. The report, citing unnamed sources and in another country's newspaper, should be taken with a grain of salt. But assuming it's true, our president would be making a ghastly mistake: Lawrence Summers should not be announced as the new Fed chair next week. He should be announced today. Or maybe this weekend.

The financial crisis that kicked off our recent Great Recession "began" many years ago, but the actual mass panic started almost exactly five years ago. Tim Geithner's emergency meetings to save Lehman Brothers from collapsing began on Sept. 13, 2008. Lehman Brothers went bankrupt on September 15. That was the start of the great panic that almost destroyed Wall Street. America has not yet recovered. We should commemorate that anniversary by celebrating one of the people who made it all possible: Lawrence Summers.

We all know the history. (Well, all of us besides maybe the president?) In the Clinton administration, Summers, the single smartest human being anyone has ever met, according to the 10 or 12 guys who are in charge of everything, was a relentless and successful advocate for the deregulation of the financial industry. He lobbied for the repeal of Glass-Steagall, and won. He lobbied against regulating derivatives, and won. One of his crowning achievements in the Clinton administration was the Commodities Futures Modernization Act of 2000, which essentially legalized gambling in derivatives -- it literally preempted state gaming laws -- and he has never actually apologized for any of this.

Laws and policies he championed directly led to the financial crisis, and the same laws and policies caused that crisis to kick off a global recession that we still have not crawled out of. He is more responsible than almost anyone else alive -- it's him, Robert Rubin, Phil Gramm and Alan Greenspan, basically -- for the severity of the crisis. I can't think of a better time to inexplicably reward Summers for his disastrous record than today, as news outlets everywhere revisit those miserable days of five years ago and sort through the aftermath. The ascension should happen as soon as possible. Think of it as a sort of birthday president for the crisis.

That sorry anniversary isn't even the only reason an immediate Summers announcement would be apt. You may have noticed that Vladimir Putin has been in the news lately, using the Syrian civil war to raise his stature as an international statesman and undermine the foreign policy of the United States. Putin is basically Larry Summers' fault, too.

When the Soviet Union collapsed -- or, rather, was disbanded, undemocratically, by Boris Yeltsin -- American neoliberal economists jumped at the opportunity to help Yeltsin "liberalize" the new Russia, which is to say give away all of its assets to Yeltsin-appointed oligarchs. The result was catastrophe (perhaps intentional catastrophe, if you subscribe to Naomi Klein's theory of disaster capitalism), and Summers was there every step of the way. According to Joseph Stiglitz, Summers "took control of the economic policy" toward Russia in the Clinton administration.

Summers even has a personal and professional connection to the corruption and fraud that consumed Russia in the 1990s: His longtime friend Andrei Shleifer, part of a U.S. government-funded Harvard team charged with helping Russia "liberalize," used the job to enrich himself through self-dealing. He was sued by the U.S. government, and Harvard was fined $26.5 million. Summers, then president of Harvard, refused to fire Shleifer.

The economic "reforms" relentlessly pushed by Summers and his allies in the Clinton administration and the IMF and Harvard destroyed the Russian economy and transformed it into an oligarchy led by a strongman. Boris Yeltsin implemented the new economic order by force -- literally, with guns and tanks -- and ended any hope that post-Soviet Russia would be an actual parliamentary democracy. By the end of his corrupt reign Russia had (justifiably) hardened anti-Western attitudes and a political system that grants the president near-dictatorial powers. Enter Putin, Yeltsin's hand-picked successor.

The timing has never been better to reaffirm that in America, a lucky few are able to be wrong -- disastrously wrong, in ways that cause a great deal of harm and suffering -- about everything and be forever rewarded for it. Larry Summers is basically the mascot of the last few terrible decades, and today is the day that should be officially recognized.