The two kinds of people who watch "Breaking Bad" 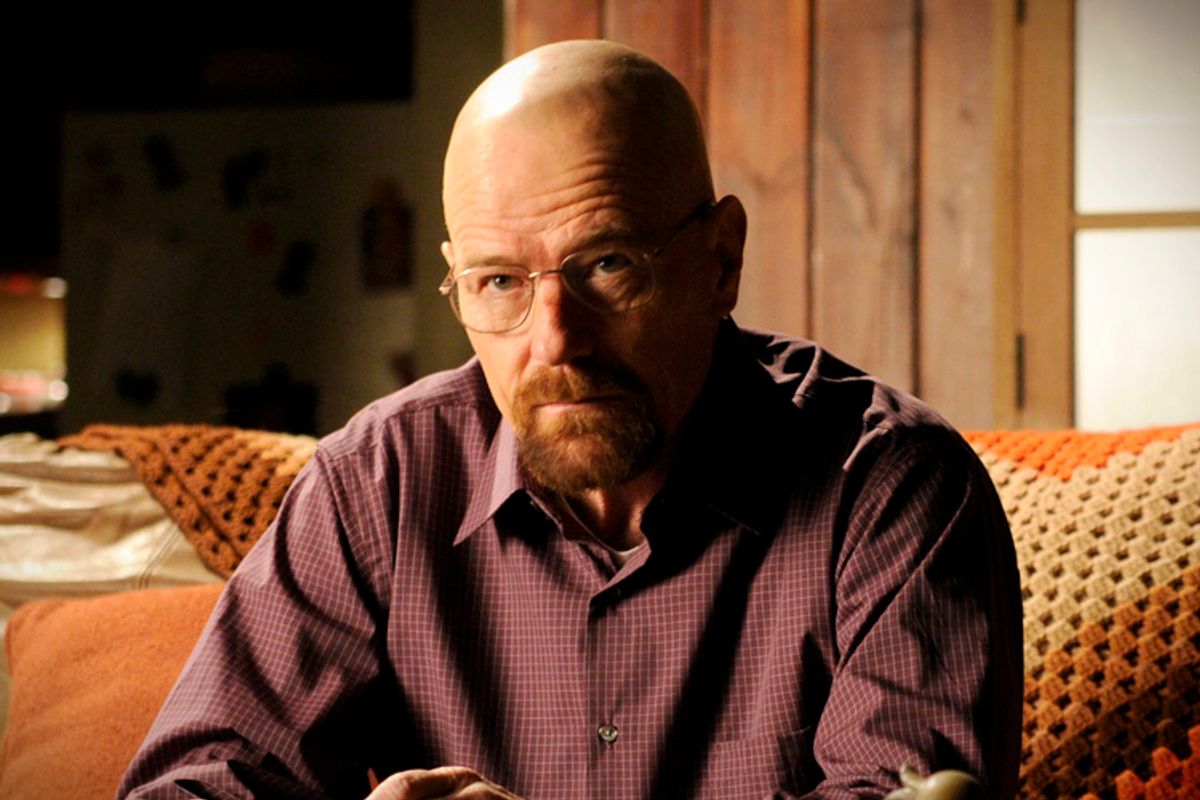 With Syria exploding and Obamacare imploding, it may sound frivolous, but one of my main concerns these days is "Breaking Bad" -- arguably, though not around our house, the best show on television. The series is coming to the close of its five-season run in less than a month, the final episodes boiling to a conclusion that, we can only hope, will be as well-cooked and high-quality as the product peddled by its protagonist.

So addictive is the allure of "Breaking Bad" that even in an age of TIVO, on demand, and DVD box set binge viewing, the final countdown has revived an ancient television ritual: the practice of watching in real time, in front of the set, on Sunday at 9:00 p.m. on AMC. After the telecast, of course, the usual digital exhalation commences in earnest — the rush to Twitter, the instant close textual analysis on blogs, and (the forum of choice for “breaking badasses”) a bull session called "Talking Bad," aired live on AMC an hour after its inspiration finishes.

Topic A, of course, is how showrunner/auteur Vince Gilligan will tie up loose ends and close the lid on the kettle. Shadowed by the disappointing sign-offs of two other boundary-breaking serial dramas, HBO’s "The Sopranos" and ABC’s "Lost," Gilligan knows the pressure is on. He has promised fans a closure that will be both satisfactory and truly terminal, with no head fakes or sequel possibilities.

Yet as interesting as how "Breaking Bad" will end is how people want it to end. The sentiments of the two rival camps provide a reliable index to two persistent strains in American culture. The first camp — neo-Puritans in temperament -- want retribution and punishment: to see justice done to a man they can no longer identify with. These viewers jumped off Walt’s RV meth lab around the time he let Jesse’s girlfriend choke to death on her own vomit at the end of Season 2. The second camp are frankly admiring of Walt’s break-out from a life of quiet desperation and his success in fulfilling his Nietzschean potential. They want him to escape or at least get a clean death of his own choosing, with his family inheriting the millions of dollars he buried in barrels in the New Mexican desert. “I don’t want his brother-in-law to lock him up,” declared Samuel L. Jackson on "Talking Bad." “I want him to die on his own terms.”

Only a true morality play attracts this level of emotional investment. Although the Puritan strain has not been dominant in American entertainment since the demise of the Hollywood Production Code in 1968, "Breaking Bad" has always had a firm sense of right and wrong. After all, for Walt to break bad presumes that categories like good and bad have meaning. Awash in infernal visuals -- the blazing meteorology and scorpion-strewn landscapes of New Mexico, the lethal fumes wafting around the meth lab interiors — the show evinces a firm belief in hell, if not heaven. “Mr. White,” says Jesse, dead serious, “is the devil.”

The large-scale production and distribution of 98% pure crystal meth is not a victimless crime, and "Breaking Bad" has dwelt on the lives destroyed in the wake of Walt’s midlife career shift. Though the squadrons of middlemen, musclemen and lab workers  killed in the line of commerce might be written off as the occupational hazards of an ill-chosen profession, the body count from the collateral damage has been even higher — as when a concatenation of events leads to a mid-air collision of passenger planes, the debris falling symbolically in Walt’s back yard. The tweakers who are Walt’s consumer base are shells of humanity — cadaverous, deranged and afflicted with the sure sign of social degeneracy in American society, really bad teeth. Innocent children are also caught in the crossfire -- two dead, one nearly poisoned to death. The cancer eating away at Walt is a metaphor for the metastasizing evil he radiates. No wonder, over time, viewer identification has shifted to Jesse, a tortured soul with a conscience, and Hank, the straight-arrow arm of the law.

Me? Maybe it’s the Catholic education, but I want Walt to pay for his sins at the hand of The Law, and Jesse, having suffered and repented, to emerge redeemed. As for the barrel-loads of cash deposited in the ground, my guess is that, like the gold dust in "The Treasure of the Sierra Madre," Walt’s stash will be forever lost in the desert sands. But it hardly matters -- "Breaking Bad" was never really about money.