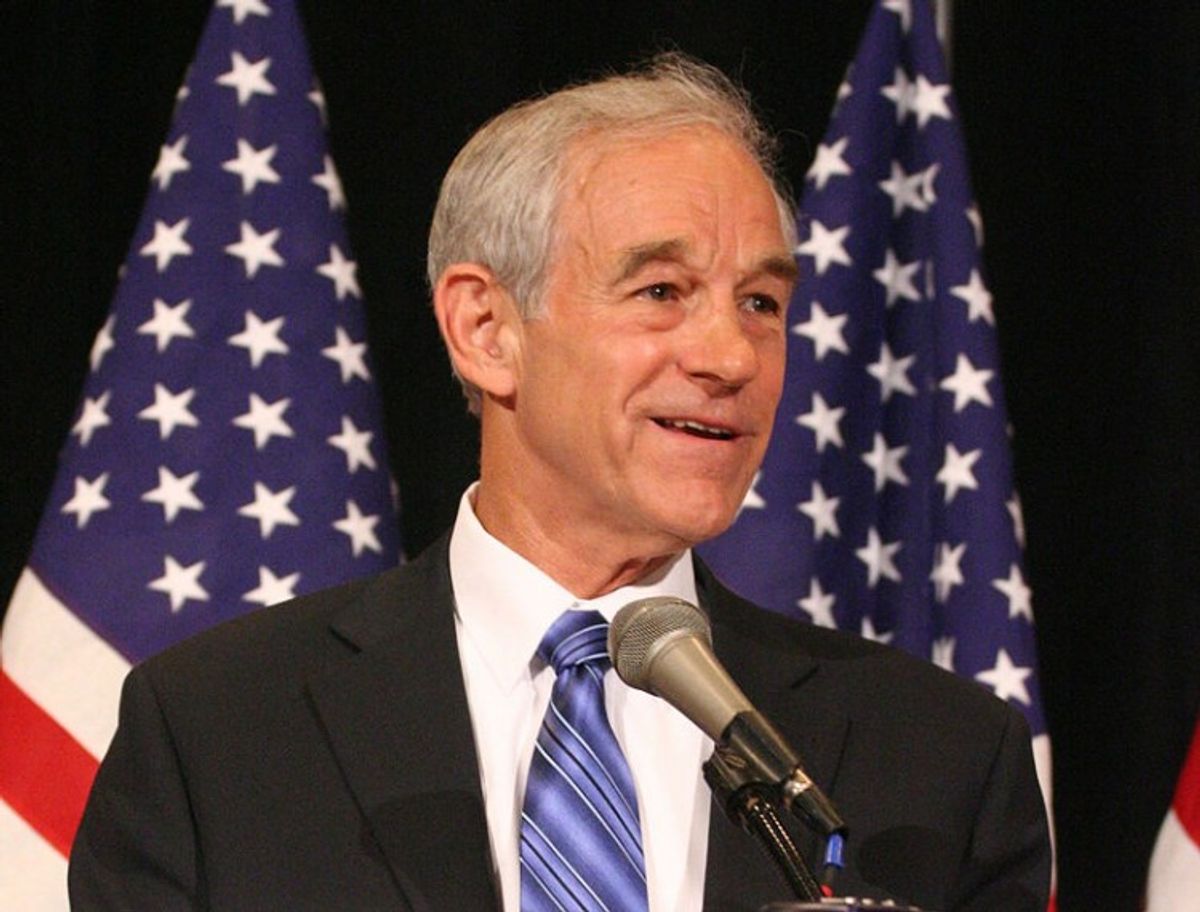 Free-market libertarians go to outrageous extremes to convince themselves and others of the infallibility of the market. Even when opposing evidence smacks them in the face, they conjure up sound bites that seem vaguely convincing but are in reality meaningless. Here are some examples.

1. A Free Market Is Good for Everyone.

Milton Friedman was a magician with words, making reality disappear: "There is no alternative way so far discovered of improving the lot of the ordinary people [than] the free-enterprise system ... The free market system distributes the fruits of economic progress among all people."

The Cato Institute added its own banality: "Free markets create a future promoting integrity and trust."

2. The Market Works. It Just Doesn't Feel Like It.

The Wall Street Journal, the Heritage Foundatio, and the Economist have teamed up to try to convince us all is well. The Wall Street Journal exclaims, "Middle-class Americans have more buying power than ever before." Perhaps the Journal staff should compare notes. Their own writer tells us that "the middle class ... has shrunk considerably over the past few decades."

The Heritage Foundation contends that "In reality, the living conditions of poor Americans have shown significant improvement over time." Heritage may equate living conditions with TV sets and window air conditioners, but for the rest of us many studies show the relationship between poverty and ill health -- chronic diseases, depression and a slew of other physical and emotional maladies.

Finally, the Economist states: Before the 1960s ... most blacks were poor, few served in public office and almost none were to be found flourishing at the nation's top universities, corporations, law firms and banks. None of that is true today. But much of that IS true today. According to Pew Research, median wealth for black families in 2009 was $5,677, compared to $113,149 for white families. Meanwhile, blacks and Hispanics, with 29 percent of the population, are severely underrepresented in both the corporate boardroom and higher education.

3. Why Can't You Be a Successful Individual Like Me?

The Wall Street Journal published a remarkably self-congratulatory article that is, once again, short on facts and high on emotion. "The American dream," trumpets the author, "has traditionally been one of individual success that is rewarded and admired." Perhaps he's not aware of the recent Executive Excess study that found "Nearly 40 percent of the CEOs on the highest-paid lists from the past 20 years were eventually 'bailed out, booted, or busted.'" And how about that "individual success" part? The fact is that the richest 10 percent own almost 90 percent of stocks excluding pensions, and the stock market has historically risen three times faster than the GDP itself. Success comes easy when you can make money just by going to bed at night.

The author goes on to announce, "In Silicon Valley, the rich commonly reinvest their wealth close to home ... I have reinvested most of my net worth in 8.5 percent of the shares of my own company." Good for him. But Over 90 percent of the assets owned by millionaires are held in a combination of low-risk investments (bonds and cash), the stock market and real estate. Business start-up costs made up less than 1 percent of the investments of high net worth individuals in North America in 2011.

Perhaps, instead, they're building businesses on their own? No. Only 3 percent of the CEOs, upper management, and financial professionals were entrepreneurs in 2005, even though they made up about 60 percent of the richest .1 percent of Americans. A recent study found that less than 1 percent of all entrepreneurs came from very rich or very poor backgrounds. They come from the middle class.

4. If You're Not a Successful Individual, You Must Be Lazy.

The Cato Institute claimed that "Welfare currently pays more than a minimum-wage job in 35 states, even after accounting for the Earned Income Tax Credit, and in 13 states it pays more than $15 per hour."

Both the Economic Policy Institute and the Center on Budget and Policy Priorities discredit the claim, noting that, contrary to Cato's implications, hardly any families receive multiple benefits at the same time. Furthermore, the benefits do not replace work. Many employed families are simply not making enough to survive. Over 83 percent of all benefits going to low-income people are for the elderly, the disabled, or working households.

5. If I Accomplish Everything on My Own, Why Should I Pay Taxes?

Using their pet buzzwords "capital" and "mobility," the Wall Street Journal came to the roundabout conclusion that a lower capital gains tax rate would end up causing higher-income taxpayers to pay more taxes. The logic is too elusive to explain here.

The Journal also attacks the Financial Transaction Tax, calling it a "sin tax" that will "punish sinners" to raise revenue for the U.S. Treasury. Never mind that the current sales tax on financial transactions is ZERO.