Why Larry Summers was not too big to fail 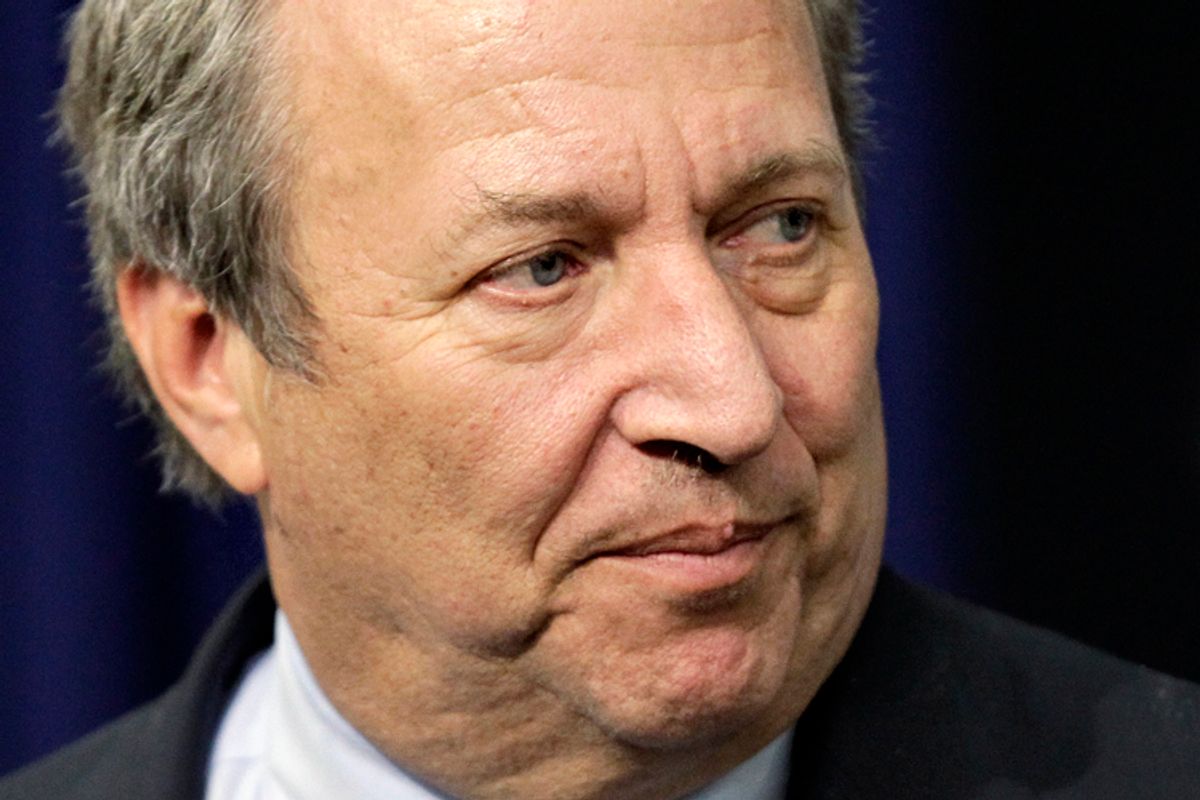 Exactly five years after the financial meltdown that wrecked the economy and helped make Barack Obama president, former Treasury Secretary Larry Summers turns out to be one of the only people responsible for the policies that led to the meltdown to pay a serious price. The bankers he helped enrich are gobbling up more of the national wealth every day; none of the malefactors went to jail or paid fines -- many in fact got federally subsidized bonuses -- but Summers announced Sunday night that he was “reluctantly” withdrawing his name from consideration to be the chairman of the Federal Reserve Bank, a job he had reportedly coveted for much of his professional life.

Sharp-elbowed to the end, Summers’ supporters depicted his decision not as the result of his own considerable mistakes -- from backing financial deregulation under President Clinton to opposing efforts to bail out homeowners, not merely bankers, during the foreclosure crisis – but Obama’s political competence. The problem, one of Summers’ backers told the New York Times, was that in the wake of the president’s politically unpopular call for military action against Syria, he was unlikely to have the political capital to fight for his former National Economic Council chair, even though by all accounts Summers was Obama’s top choice.

“Clearly Obama couldn’t bring his own most enthusiastic supporters to back him on an issue of national security,” one supporter told the New York Times. “How was he going to corral them for Larry?”

Maybe that dig at Obama will finally show the administration why so many in Congress and elsewhere opposed Summers as Fed chair, despite his widely acknowledged economic brilliance.

But there is a connection between Syria and Summers that’s worth noting. On both issues, progressives have shown an admirable willingness to ask tough questions of their president and challenge what appeared to be done deals. Last month a reported 20 senators signed a letter circulated by Sen. Sherrod Brown backing Federal Reserve vice chair Janet Yellen for the job. The list included Obama’s Illinois ally Sen. Dick Durbin, along with Dianne Feinstein, Barbara Boxer, Jeff Merkley, Tom Harkin, Elizabeth Warren and independent Angus King of Maine. The White House pushed back, telling Sen. Harry Reid that the president wanted the space to make his own decision, but the dissent didn’t die. When Montana Sen. Jon Tester joined the list of dissenters last week, Summers’ chances died. "By Friday it was clear the Democratic votes weren’t there in the Banking Committee,” a Senate Democratic aide says.

In his devastating “The case against Larry Summers” last week, the National Journal’s Michael Hirsh laid out the critics’ brief this way:

The Federal Reserve chairman wields such enormous power, with so little accountability, that he or she is said to be the second-most-powerful person in government after the president. Decisions are habitually made in secret. The job requires a person of great personal tact, subtlety, and self-control. It requires someone who knows how to build consensus at the highest levels for the right kind of policies—someone who possesses the maturity and character to admit error and shift course when needed. But, according to numerous accounts from those who have worked with him, Summers has often displayed the opposite attributes during his long career. Behind the scenes, he has used his power, combined with intellectual arrogance, to bully opponents into silence, even when they have been proved right. He has refused to allow his dissenters a voice at the table and adopted a policy of never admitting errors.

What Hirsh’s exhaustive brief against Summers does not mention is that also last week came the news that since leaving the Obama administration, the tone-deaf Summers had taken on work as a paid consultant for Citigroup, NASDAQ OMX Group and the hedge fund D.E. Shaw. That alone should have disqualified Summers (who did bail out of a planned Citigroup keynote address after the Wall Street Journal revealed his conflict of interest).

While Summers’ defenders may wish the president had the stomach for a tough fight with his own party, they should really ask why their candidate’s own charm offensive with Democrats fell flat. Sen. Elizabeth Warren diplomatically told MSNBC’s “Morning Joe” that while “I don’t think it’s any secret that Larry was not my first choice,” she recently had “a good and thoughtful conversation” with him about the nomination. Then she went on to kvell about Janet Yellin, who “will make a terrific Federal Reserve chair,” speaking to the president more than to the "Morning Joe" crew.

Warren's language implied that Yellin was a done deal, but that may be a political stance meant to create the impression that appointing anyone else is unthinkable. In fact, it seems very thinkable. The White House has been persistently skeptical about Yellen’s qualifications. In July, the president went out of his way to defend Summers from “a bunch of attacks that I was hearing” while ignoring the very loud whispering campaign against Yellen, some of it coming from his own administration.

Some officials within the administration have expressed irritation for some time at what they see as a campaign by Ms. Yellen or at least on her behalf that unfairly maligned Mr. Summers ... Ms. Yellen has frustrated some of her own supporters by her unwillingness to campaign, or to coordinate their efforts on her behalf.

Ah, that Janet Yellen. She campaigned too hard for the job – or was it not enough?

"Yellen would be a slam dunk in the Senate," says a Senate Democratic aide -- which should make her a slam dunk for a White House that will be wrangling with Congress on Syria and the debt ceiling and ought to yearn for an easy win. On the other hand, "they may not want to look like they capitulated to Congress," the aide says.

It would be hugely disappointing if the president passed up the opportunity to appoint a well-qualified and highly popular choice who would also shatter the Fed’s glass ceiling. We can’t know that yet. What we do know is that on a weekend when we remembered the awful economic events of September 2008, when a new Reuters poll showed Americans are still furious at Wall Street (55 percent say the government failed to do enough to prosecute bankers), it turned out that despite the best efforts of his many backers, Larry Summers was not, in the end, too big to fail.