Their partisan rationalizations include blaming gun safety measures. They're dishonoring those who were killed 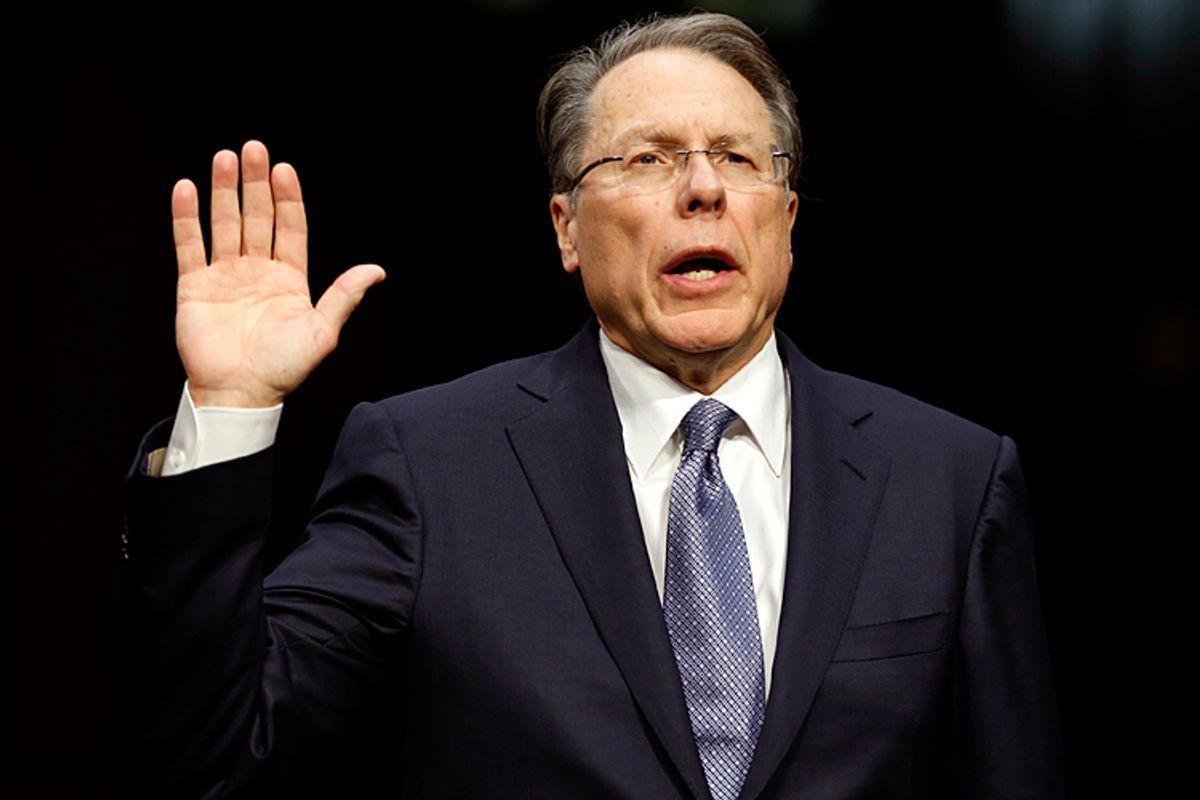 In the wake of yet another mass shooting, Americans are reeling from grief and exasperation as gun rights extremists go on the defensive. The latest twist on their gruesome, partisan rationalization is to blame the Navy Yard shootings on the fact that the area was a “gun free zone” within a city of tight gun control restrictions. This plainly ignores the facts and dishonors those killed.

While we know very little about the Navy Yard shootings, it's likely that several of those on the scene — including, potentially, several victims — were highly trained and armed military police officers. After all, “gun free zones” only apply to civilians, not legitimate, armed security personnel. But more important, everything we know about recent mass shootings defeats this preposterous argument. According to a comprehensive study by Mother Jones magazine, in the past 30 years, not a single mass shooting has been stopped by an armed civilian. According to a study by Mayors Against Illegal Guns, less than a quarter of mass shootings in the last four years occurred in “gun free zones.”  Moreover, according to the Mother Jones study, there is not a single piece of evidence that any shooters deliberately chose to target locations where guns were prohibited.

Further, as Chris Hayes artfully pointed out in his response to the Navy Yard shootings, having more armed civilians in the vicinity of a mass shooting is likely to lead to more carnage, not less. According to a study by the New York Times, highly trained New York City police officers who discharged their guns in public hit their intended targets only 34 percent of the time.  To put it differently, the police missed their targets — and hit something else — two out of every three shots. Now imagine even the best-trained amateur gun owners and what their record might be.

To be honest, though, even having to dispel the conservative “argument” here is ludicrous. After all, nine in 10 Americans— and even three-quarters of gun owners — support basic, common-sense laws to ensure gun safety. The American people are sick and tired of almost weekly mass atrocities, which, yes, have something to do with the collapse of affordable and accessible mental health care in America (not that conservatives are rushing to support healthcare reform) but also has to do with the very dangerous weapons that are all too easily accessible to very dangerous people.

The same day a mass shooting in the Sandy Hook Elementary School in Newtown, Conn., killed 26 people — including 20 young children — a sick and twisted man also unleashed a massacre in an elementary school in China. The difference?  He had a machete, not a gun. In China that day, 22 children were seriously injured. But none died. For 22 families, that’s a world of a difference.

The shooter in Newtown used an AR-15, one of the military-grade weapons that would be regulated under laws proposed by President Obama. With the AR-15, the Newtown shooter was able to fire a bullet roughly every two seconds. The Navy Yard shooter also reportedly had access to an AR-15, as well as a shotgun and semi-automatic handgun or multiple handguns. Details are still coming out.

Gun rights extremists like to deal in hypotheticals. What if everyone in the Navy Yard had their own AR-15? What if the shooter used knives instead? What if President Obama personally knocks on my door to take away all my guns and I need to defend myself? But especially in the wake of tragic mass shootings, the realists among us deal with facts.