Lessons of "The X-Files": The one show every TV exec should be watching

"The X-Files" revealed the perils of planning a whole show in advance. Is Netflix listening? 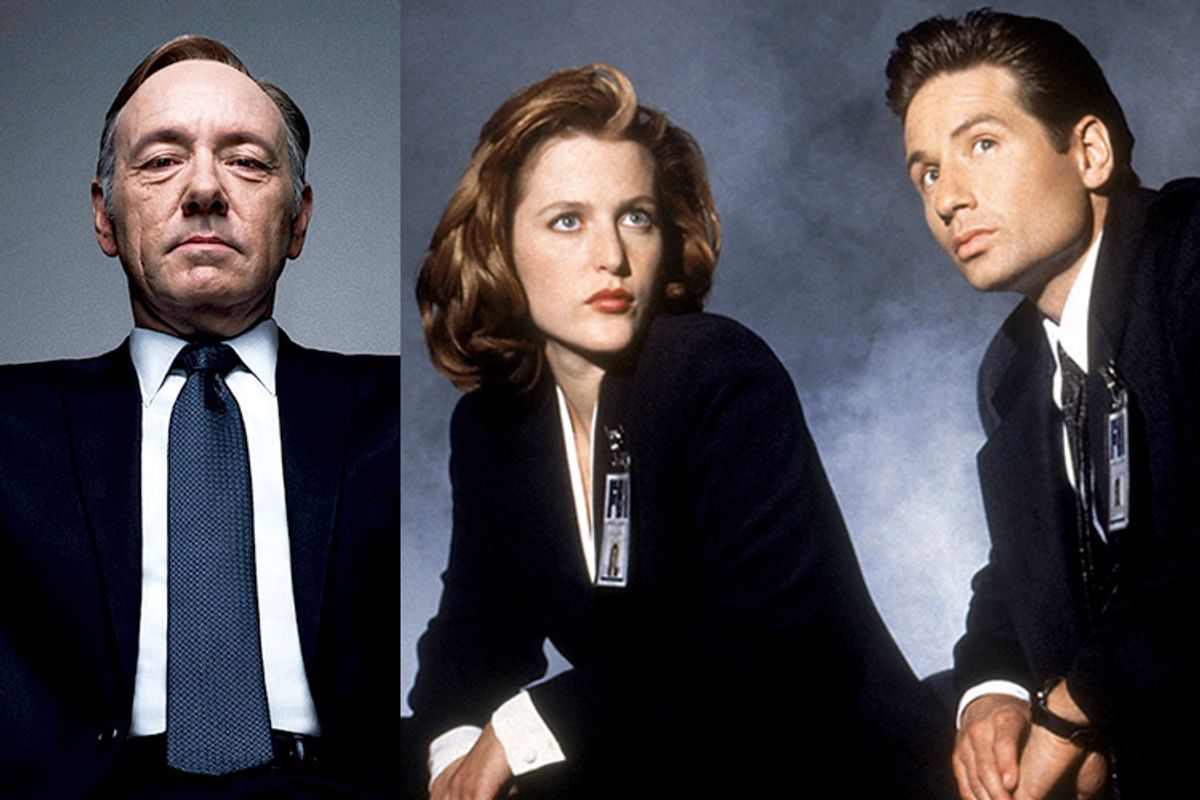 A television series is a shapeshifter. At birth, it looks fully formed, but its bones and vital organs are dangerously undeveloped, and it’s forced to compete immediately with countless other shows ravening to take its place. To stay alive, it evolves from one week to the next, sometimes radically, but also blindly, so it won’t know for months whether its latest adaptation is a brilliant strategy or a fatal mistake. Its lifespan can be as short as an hour or as long as a decade, but if it endures, it produces offspring of its own, mostly close copies of what the parent became only after years of metamorphosis. And if it’s lucky, it lives forever, an immortal being, in syndication.

When "The X-Files" premiered 20 years ago, on September 10, 1993, it was thrown into a television landscape that seems increasingly hard to recognize. There were no box sets or streaming options; Netflix and BitTorrent didn’t exist; the Internet, which would play such a large role in the show’s popularity, was just starting to appear in most homes. When I first encountered it, part of me was irked by its narrative amnesia, in which each case’s incredible events were forgotten by the following week, but it didn’t have much of a choice. Each episode had to stand on its own; the show, always seemingly on the verge of cancellation, had to keep moving or die.

Of course, it was far from alone. When a series first appears, it’s impossible to know what it might become, which is why it can be so painful to revisit a pilot — or, in the case of "Parks and Recreation," an entire early season — of a show you’ve come to love. A series needs time to learn its own strengths, and it doesn’t always get a chance: television history is littered with casualties, like the lamented "Bunheads," that died far too soon. Telling shapely stories when the endgame is so uncertain requires an inhuman degree of skill, and only a handful of geniuses, like Matthew Weiner of "Mad Men," have pulled it off over an extended run. But the medium’s unforgiving nature can also result in astonishing discoveries for the shows that manage to survive.

What strikes me now about the first season of "The X-Files" is how relentlessly it kept reinventing itself, and how willing it seemed to try anything that worked. The pilot had established a rich, flexible premise, and in David Duchovny and Gillian Anderson, it had a pair of leads who were clearly worth following. Otherwise, though, its first 20 hours are a series of incursions into unexplored territory. “Squeeze,” the third episode, with its liver-eating mutant, established that the show was about much more than aliens, who quickly learned to share space with myriad monsters of the week — ghosts, faith healers, evil twins — so that one case might bring a snowbound bottle episode blatantly modeled on "The Thing," while another was a psychological two-hander between Scully and a clairvoyant killer.

The result, inevitably, was a thrilling but appallingly inconsistent series, and it tended to punish viewers who expected any kind of quality control. Unlike most procedurals, which benefit from a stable supporting cast and a few familiar locations, "The X-Files" had the spirit of an anthology show, with a new premise, setting and players in every installment. As a result, even devoted fans knew that you rarely got more than three really good episodes in a row. Well into the third season, the show’s creative high point, a stretch of two months could produce classics like “War of the Coprophages” and “Pusher,” and then bottom out in a clunker like “Teso Dos Bichos,” in which Scully is attacked by a bunch of cats. I’m as big a fan as they come — I’ve published entire novels in secret homage to this show — but even I tend to remember it as 20 great episodes spread across many seasons, and I prefer to quietly forget the rest.

But as time goes on, the show’s formal incoherence starts to look like its greatest asset. At first, it couldn’t afford to remember its own past, and this lack of continuity led to a greater sense of dislocation than any of its conscious plunges into paranoia. No single explanation could account for all the weirdness on display here, which undercut the show’s own conspiracy elements: the world was already full of werewolves, demons and lake monsters, all of which would presumably continue to go about their business even after the alien invasion. It also enriched the dynamic between the two leads. "The X-Files" shone brightest as a debate between two strong personalities, but it stacked the odds in Mulder’s favor so unremittingly that Scully’s skepticism began to seem equally insane.

And their search for the truth only paralleled the restless creative exploration behind the scenes of the show itself. “Humbug,” from late in the second season, featured a premise — a series of murders in a community of circus freaks — no more outlandish than most, but writer Darin Morgan imbued it with a newfound air of wry humor that shook up the entire series, which seized on the hint at once. Morgan would write three more episodes and win an Emmy for his work, which balanced a despairing wit with a subtle contempt for the genre’s limitations, and he paved the way for writers like Vince Gilligan, whose “Pusher” is possibly the best episode the series ever produced, and who would go on to create "Breaking Bad," in which the balance between drama and black comedy has also evolved in real time.

In the end, unfortunately, the series felt obliged to impose a greater degree of order, and more than any other factor — creative exhaustion, cast departures, the decision to push the love story into the foreground — it was the effort to fill out the mytharc that led to its downfall. As creator Chris Carter strained to tie up the web of complexities he’d woven, the results grew progressively less interesting, and in retrospect, it all sort of blurs together. What drew viewers in wasn’t the details of the conspiracy, but a tone the series established, almost by accident, in its haphazard early days. And with so many shows by the likes of J.J. Abrams evoking its mythology while sacrificing its conceptual daring, I have an uncomfortable feeling that if it premiered again today, it would start off looking a lot more like its unsatisfying later seasons.

This trend toward expansive arcs at the expense of individual episodes can be traced back to a changing business model for television itself, in which every show gets its own box set, or at least a second life on demand. There are more ways than ever for creators to think in entire seasons, but with every gain comes a loss, as we find when we turn to Netflix. "House of Cards" is the most gorgeous show I’ve ever seen, but its storytelling is oddly complacent — subplots are introduced in slow, talky scenes without any relevance to the episode at hand, in smug confidence that they’ll pay off eventually — and the fourth season of "Arrested Development" is a hugely ambitious experiment that tends to run out of air halfway through every installment. By focusing on the long game, these shows cut themselves off from new discoveries, when it might have been better to figure things out on the fly.

If there’s a lesson here, it’s that most great television can’t be conceived as a whole, but as something that evolves under pressure, even if it runs the risk, as "The X-Files" did, of being canceled at any moment. This kind of growth is more elusive these days, but it still occurs. As unlikely a series as "The Vampire Diaries" can rework itself into one of the most compelling shows on the air, and "Orange Is the New Black" demonstrates that there’s room at Netflix for a series that stays vital one hour at a time. Best of all, perhaps, is Bryan Fuller’s "Hannibal," a surprisingly tender and powerful show that benefits from a guaranteed run of episodes while remaining alive to its own possibilities — which only brings the wheel full circle. Scully began as a nod to Clarice Starling, and here, wonderfully, we have Gillian Anderson as Hannibal Lecter’s therapist, cold but still lovely, presiding like a praying mantis over her own hungry children.