An article from the magazine is praised for condemning rape, only to be revealed as a fake 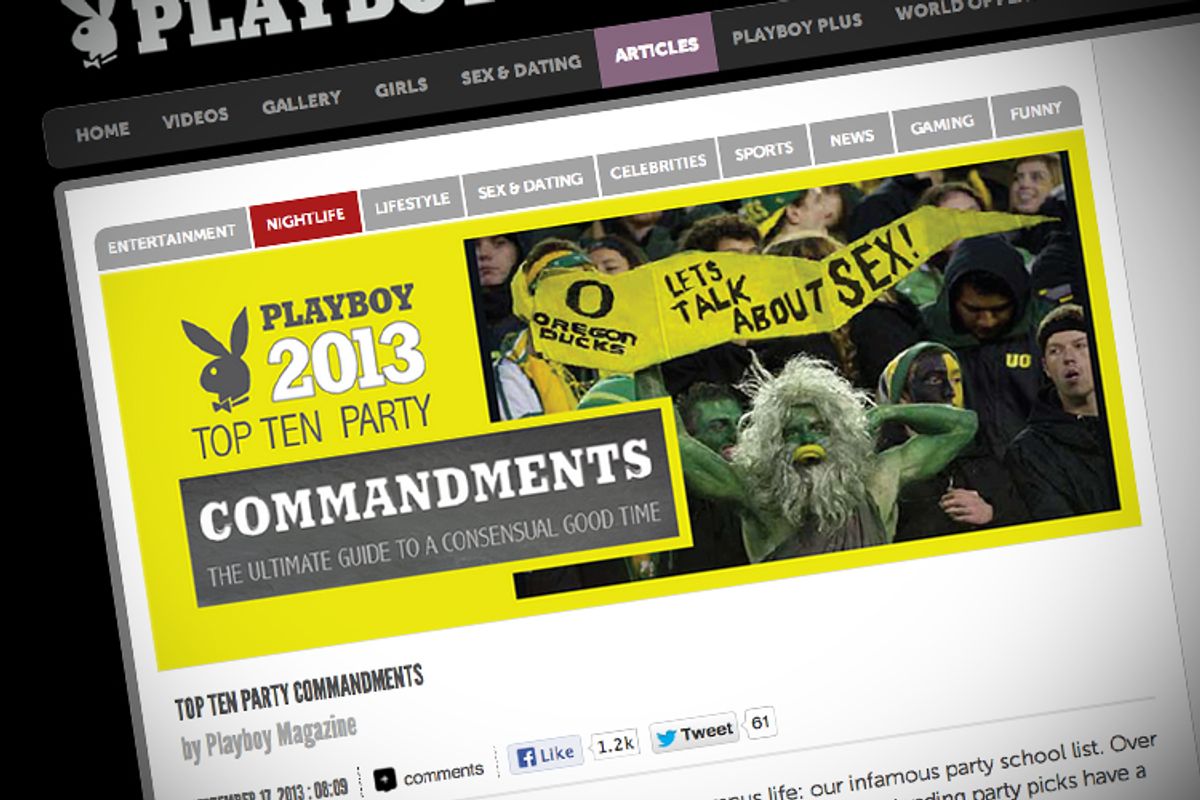 News broke this morning that Playboy had published a guide to consensual sex, causing much of the Internet to do a double-take -- and consider actually reading it for the articles. But just a few hours later, the commendable list, titled "Playboy’s 2013 Top Ten Party Commandments," has been revealed as a fake.

The feature, which was published at the URL partywithplayboy.com, announced that the magazine has overhauled its "infamous party school list." An introduction explained:

Over the years, it has been brought to our attention that some of our long-standing party picks have a not-so-toast-worthy, rape-ridden side to their campus life. Somewhere in the countless hours we spent tallying up co-eds and scoring beer pong, we lost track of the most essential element of the Playboy lifestyle: sexual pleasure. Rape is kryptonite to sexual pleasure. The two cannot co-exist. For our revised party guide to live up to our founder’s vision, we had to put a new criterion on top. Namely, consent.

The prank article got mileage through a fake Huffington Post article on the feature. Then it landed an earnest and thoughtful writeup on ThinkProgress, which has since been updated to reveal that it was hoax. Before long, it was blowing up on Twitter. Why? Because people loved it. Commenters responded enthusiastically, writing things like, "I love seeing Playboy addressing this very important issue. Consensual sex means a great time for everyone!" and "I have so much respect for Playboy, getting back to it's roots of being sexual revolutionaries! Sex should be fun for everyone involved, and CONSENT IS FUN!!!"

It has yet to be revealed who is behind this delightful prank. One thing is clear, though: The joke isn't on those naive enough to cheer the magazine for taking a stand on sexual assault; it's on Playboy. These pranksters are simply schooling the magazine, which has profited off of women's bodies for more than half a century, how it should be doing things.