Huge corporate palm oil plantations are the cause of so many ills -- and it's something we can fix. 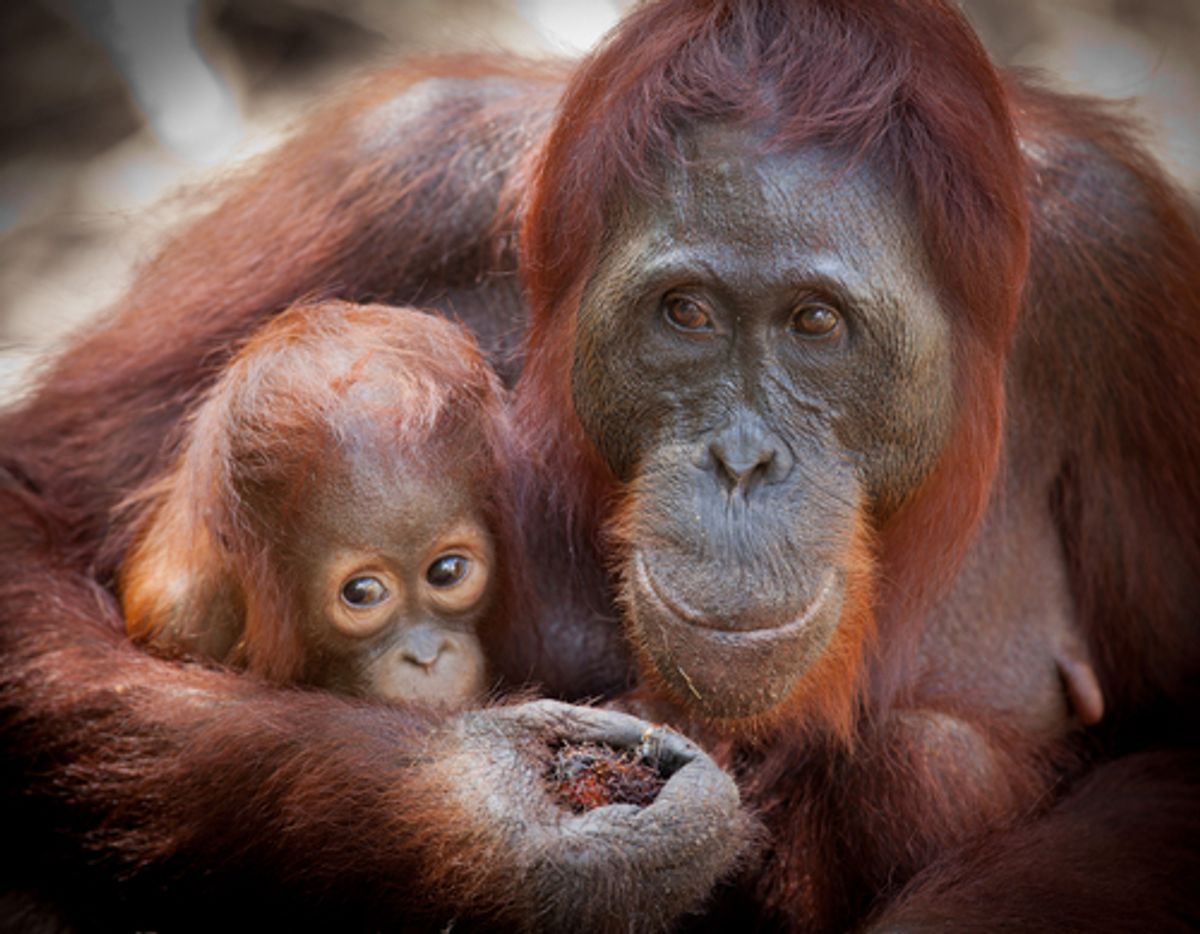 If you buy packaged snack foods, chances are you’re doing your part to destroy rainforests half a world away and contributing to the death of orangutans.

According to a report by the Rainforest Action Network (RAN), nearly half of all food found in grocery stores contains palm oil, the majority of which is directly linked to rainforest deforestation, child labor, slave labor, climate pollution and other atrocities. Millions of acres of rainforest habitat in Indonesia and Malaysia are destroyed to plant giant industrial palm oil plantations in response to increasing market demands. RAN calls these destructive palm oil products "conflict palm oil."

Only an estimated 60,600 orangutans exist on earth today, and they are on a rapid path to extinction due to palm oil plantations' obliteration of their rainforest habitat.

“We could see orangutans go extinct as a species in our lifetimes,” he says. “If that happens, to save a few pennies per package on junk food, it would just be a tragedy that would be hard to stomach.”

While some responsible palm oil plantations do exist, international producers and food marketers like Cargill—one of the largest US suppliers—lump all of the palm oil into one mass shipment so that companies cannot delineate between conflict and non-conflict palm oil.

Sutherlin says there is no way for companies to verify that the palm oil they're using is not conflict oil as there is no traceability or transparency in the supply chain.

As a result, conflict palm oil is added to chocolate, turned into fry oil, and slipped into a plethora of snacks you would never suspect, from chips to cookies to ice cream.

Conflict palm oil is also slipped into everything from personal care products and biofuels to laundry detergent and lipstick. However, after assessing the palm oil trade in a global context RAN decided to focus their campaign on snack foods. They concluded that by targeting just 20 of the largest snack food conglomerates that use palm oil products, it would be possible to sway the entire global market away from conflict palm oil trading. They dubbed those companies the “Snack Food 20.”

As a group, the Snack Food 20 grosses more than $432 billion in revenue annually, and sells its products in dozens of countries in addition to the U.S., including southeast Asia, India, China, Japan, and Europe.

“Each of these companies is a multibillion-dollar corporation," Sutherlin says. "Together they really do have the leverage on the market to make demands. They have the power to change the way palm oil is produced."

Most of the Snack Food 20 conglomerate companies, as well as the multitude of brands they own, are common household names:

RAN is asking that the Snack Food 20 go to their international traders and demand they eliminate conflict palm oil from the supply chain.

Instead of a boycott campaign, at least for now, Rainforest Action Network is running a "pressure" campaign focused on getting consumers to take action and push the Snack Food 20 to change their ways. Sutherlin says part of that decision is due to the staggering number of household products and foods that contain palm oil.

“It’s almost unobtainable at this point to run an effective campaign that would be about boycotting,” he says. “[Palm oil is] so widespread that it would be a little arbitrary to focus on, say, Cup O’ Noodles soup, or, say, ice cream or chocolate bars, or cookies, or crackers. It’s so pervasive and the problem is so systemic and so large-scale."

RAN has reached out to each member of the Snack Food 20. Sutherlin says most have responded in one way or another, and a handful have even sat down to speak with RAN. Another handful, he says, contacted RAN just to dismiss them and claim they've "got this covered." Others haven’t responded at all.

Sutherlin says RAN remains in the process of identifying the “leaders and laggers,” so they’re hesitant to call out specific companies as the worst or best responders.

“When that process is able to work itself out more clearly we’ll definitely be focusing our campaign on really shaming the individual companies that are not leaving [conflict palm oil],” he says.

For now, RAN is organizing a series of efforts aimed to garner grassroots public pressure.

Food companies are sensitive to consumer feedback and public image, so Sutherlin thinks a widespread campaign with a critical mass will force a shift.

“These companies very much don’t want to have their brands associated with child labor and extinction,” he says.

Here are five ways individuals can put the pressure on the Snack Food 20 and move the global market away from conflict palm oil:

For people who want to do more than send an email or join a petition, RAN has started a national effort called the Palm Oil Action Team. As part of one of the team’s actions, RAN will send you stickers that say “Warning, This snack food may contain orangutan extinction.” Place those stickers on Snack Food 20 products in your local grocery store and raise some grassroots awareness.

The El Paso Zoo developed an App called the “Palm Oil Guide and Scanner.” Scan the barcode on any given product in the grocery store, and the app will tell you whether or not palm oil is an ingredient. Boycott made simple.

3. Join 'The Power Is In Your Palm' Campaign

Since there are only 60,600 orangutans left in the wild—in Sumatra and Borneo—RAN is trying to get one person per orangutan to call on the Snack Food 20 to cut conflict palm oil. For this photo petition campaign, titled “The Power Is In Your Palm,” RAN is asking that 60,600 people take a picture of their outstretched hand with a hashtag written on their palm that says “in your palm.” Upload the photo to the webpage, which will be up in one week, and once all 60,600 images are collected RAN will send them to the offices of the Snack Food 20 CEOs.

4. Email, Call and Petition the Companies

Picking up the phone or sending a letter is one of the most effective ways to pressure the executives in charge of these companies. You can sign up on Rainforest Action Network's email action list, or do some research yourself—made easy via the RAN website—and start sending emails and making phone calls to the higher-ups in charge of the Snack Food 20.

Sutherlin says the Snack Food 20 are “scanning news about their brands, and looking at social media feeds. “If enough people tweet to them and about them and [participate in] other ways we’re offering for them to get involved, the companies will listen.”