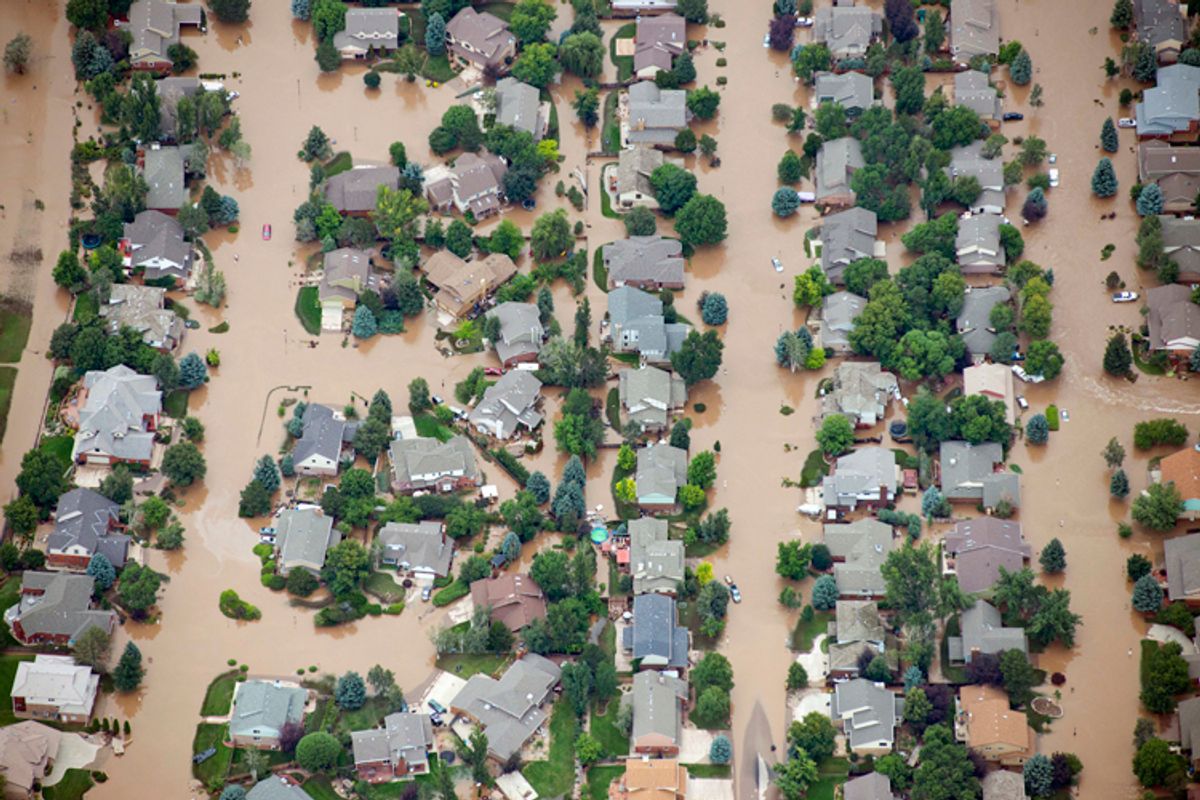 Homes in residential neighborhood in Longmont, Colo., are submerged as flooding continues to devastate the Front Range and thousands are forced to evacuate with an unconfirmed number of structures destroyed, Friday, Sept. 13, 2013. (AP/John Wark)
--

As I Shop-Vac the water seeping into my Boulder, Colo., basement for the hundredth time this week, I’ve had a lot of time to think of my old friend Jim Jensen, who runs the Montana Environmental Information Center. Jensen is a crotchety fellow, much hated in Montana by all the right people — mining CEOs, timber earls and other assorted assailants of the environment. He himself is a hater of sorts. He hates cant. A couple of cant phrases I have heard him disparage are “global warming” and “climate change.” They’re too anodyne for him. They don’t inherently call to mind — or more to the point, the gut — much more than a pleasant June day after the last snows have melted in Helena or fine-tuning the thermostat on your 5,000-square-foot chipboard palace. Jensen prefers the term “global climate disruption” — to him an adequate description of the horror we face thanks to our ongoing hundred-plus-year debauch burning fossil fuels. The word “disruption” makes clear that we will not easily adapt to the ravages to our atmosphere. Indeed some people will not adapt at all. Some will just die — from lack of water or, be it in Boulder or Bangladesh, its reverse. I think Jensen is onto something with “global climate disruption,” but I might go him one better with “climate devastation.” It’s really that bad.

If you doubt a stronger term is needed, I propose you consider the dissonance between bailing water in Boulder one hour, then reading the national press the next. You have to read quite a while before you find anyone who will suggest that the storm we had is not a fluke of nature (“historically bad luck,” an editor at Time called it) but rather, quite possibly, the viper of climate devastation. Let’s be clear about the storm we’re talking about. You have probably read that it was a hundred-year flood, a flood that has a 1 percent chance of occurring in any given year. That’s an almighty understatement. The numbers show it was a thousand-year flood, a flood with a 0.1 percent chance of occurring in any given year. The most rain that had ever been recorded in Boulder from one storm was 7.37 inches on May 5 through May 8, 1967. We got more than 9 inches last Thursday alone. We got 15 inches Monday through Friday. That’s as much rain as we’ve gotten in entire years. Our average annual precipitation is about 20 inches, our record 29.93. We hit 30 inches this weekend—and we’ve got three and a half months to go.

Sounds bad, right? But that’s not the half of it. The previous massive floods in and near Boulder have been the result of heavy spring rains or abrupt summer thunderstorms: the Big Thompson flood of 1976, which left nearly 150 dead; the catastrophic Fort Collins flood of 1997; Boulder’s last hundred-year flood, the great storm of 1894; and others of the genre. But this year’s deluge, you will have noticed, occurred in September, which ranks in the bottom half of our months for rain. We normally get just a bit over an inch and a half in September, and our previous record was a hair over 3 inches, set back in 1901. We’ve received nearly six times that, at 17.17 inches so far. And never before in any month — even in the wettest months of what passes for our rainy season — have we seen more than 9.59 inches. (That record was set in May, during the wet season.)

Strike you as a little odd? It does some climatologists, who are saying that the weather pattern that brought this storm might be normal for the Gulf states but has little precedent in Colorado. It is, in short, a drastic change in the global climate. Moreover, the flood was compounded by other climatic devastation, chiefly years of drought. The problem with drought is that when soils are overcooked, they become hard. When they become hard, they don’t soak up water as quickly. They send it downhill — into creeks, into your basement, wherever. Ironically, if the area has been really cooked, by a wildfire, as some of the surrounding area had been, you have the opposite problem: there will be no ground cover to hold the soil in place, and it will get moving in a hurry — changing the course of creeks, smashing through your basement walls. The result is — well, you’ve seen the result in the pictures and videos streaming out of Colorado.

Can we say with certainty that this storm was caused by climate devastation? Of course not. You can’t say that with any storm. But can we say that the odds are very good? You bet.

I can’t say I’m surprised, though, that so few people are saying as much, least of all people who “matter.” Type “Colorado flooding” and “climate change” or “Colorado flooding” and “global warming” into your favorite search engine and you’ll see that virtually none of our nation’s big newspapers or influential websites have a thing to say on the matter. The same goes for President Obama and other national leaders. This is a far cry from the halcyon days of, oh, 2012, when Hurricane Sandy struck the Eastern seaboard — prompting politicians, pundits and press to say the disaster was quite probably due to climate change. Even President Obama’s campaign, the campaign of a man who has done as much as, maybe even more than, any president before him to abet the wrecking of the climate — recall, just for a start, that he thwarted the Kyoto Protocol and Copenhagen climate summit — said that Sandy’s disastrous toll was caused by climate change. But his discussion of our disfigured climate since then has been unspecific and hollow, unburdened by substantive action.

What has changed in 11 months? For one thing Obama is again just President Obama rather than Candidate Obama. He’s no longer trying to convince leftists of his bona fides. Nor is he trying to show, for the benefit of swing voters, that climate-devastation deniers and their standard bearer Mitt Romney are ludicrously out of touch with reality. His attitude toward Boulder epitomizes his reversion to do-nothingism. During the 2012 campaign, when Obama needed the electoral votes of swing-state Colorado, he visited Boulder three times — three times, to a city of 100,000! He came because he knew we would give good crowd, and we did. (Well, my friends did. I’ve long thought the man a con.) But we haven’t heard from him since. We’re just his good-time girl of the past, forgotten in his respectable present. Compare, for example, the number of words he has given to the limited tragedy of the Naval Yard shooting versus the vaster calamity in Colorado, let alone the calamity’s probable cause. And why would he do otherwise? To talk too much of the consequences of climate devastation would open himself to the suggestion that he has been one of its primary handmaids.

Another reason the storm and its causes haven’t received much ink is that this is a Western disaster. The most prominent reporters, editors and talking heads do not reside in the West. The most important politicians, even those from Western states, effectively don’t either. Forgive us if from here it seems that if the A train to 42nd Street hasn’t been washed out, a disaster has to work hard to get column inches. (Hurricane Katrina was the exception thanks to its un-ignorable size and the equally colossal ineptitude of the Bush administration in responding to it.)

Finally, though — and, I think, ultimately — the reason few people are connecting the climactic dots on this story is because few people understand what “global warming” and “climate change” mean. Here’s what they mean: a complete refashioning of our weather; a grand and dreadful shift in the character of the earth as we know it; big, nasty, life-wrecking changes; devastation, in a word. Until we all understand this, our leaders and opinion-makers will continue to abet our self-destructive affair with oil, coal, and other climate ravagers—with all the consequences we sadly deserve.

Steve Hendricks’s most recent book is A Kidnapping in Milan: The CIA on Trial. He is at work on a book about the world’s most beautiful soccer.