As Colorado endures a slow-motion disaster, so-called "regulators" are in total denial -- while lives are at stake 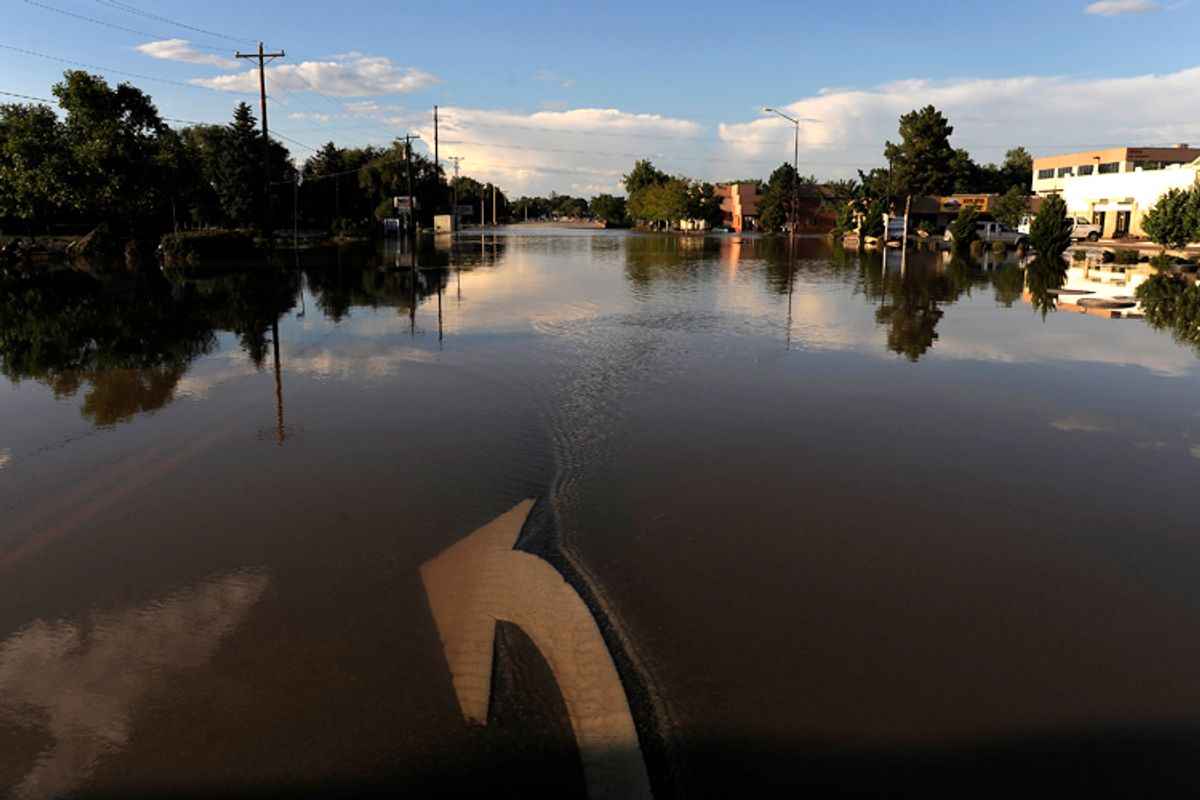 Two months before my community and so many others were overwhelmed this week by epic rains, our state's chief oil and gas regulator, Matt Lepore, appeared onstage in nearby Loveland with representatives of the fossil fuel industry. During that event, Lepore -- an industry-lawyer-turned-public-official -- proceeded to berate citizens concerned about the ecological impact of fracking and unbridled drilling. More specifically, he insisted that those asking fossil fuel development to be governed by the precautionary principle are mostly affluent and therefore unconcerned with the economic impact of their environmentalism.

Ignoring public polling data that documented the broad support for tougher environmental regulation, Lepore was making the classic populist argument against the precautionary principle. In this instance, an industry puppet: 1) pretended environmental stewardship is merely a luxury for those fortunate enough to be able to afford it; and 2) insinuated that a lack of such stewardship primarily harms the sensibilities of rich folk, but not much else.

Today, parts of the same city where Lepore delivered his diatribe remain inundated. Same thing for "thousands of oil and gas wells and associated condensate tanks and ponds," according to the Boulder Daily Camera.

Already, there is at least one confirmed oil pipeline leak. At the same time, the Denver Post reports that "oil drums, tanks and other industrial debris mixed into the swollen (South Platte) river." Some of this has been caught on camera, as harrowing photos of partially submerged oil and gas sites now hit the Internet. It all suggests that there's a very real possibility of a slow-motion environmental disaster, one whose potential damage to water supplies, spread of carcinogenic chemicals and contamination of agricultural land should concern both rich and poor.

In retrospect, then, the flood powerfully illustrates the problem with officials like Lepore (who later apologized) pretending that environmental stewardship and the precautionary principle are just aristocratic priorities. They are, in fact, quite the opposite: They are priorities for everyone and if those priorities have any class implications at all, those implications disproportionately involve the middle and lower classes.

That, though, is only one of the big lessons from the Colorado flood. Another is the lesson that in the age of climate change and severe weather, geographic distance and the old "out of sight, out of mind" defense mechanism should no longer provide psychological comfort to anyone.

There are, of course, plenty of ways to illustrate that larger point. You can simply consider how carbon emissions -- whether from faraway China or remote Wyoming -- affect the entire planet's temperature and weather. Alternately, you can look at 2011 photos of a flooded nuclear power station in Nebraska, and then imagine how big a blast zone a Fukushima might create if one happened in the center of the country. Or, just consider my family's own microcosmic experience during the floods here in the square state.

Living in southeast Denver, we were worried about Cherry Creek overflowing into our neighborhood, which, thankfully, it didn't. So we experienced the natural inclination to view this Thousand-Year Flood as imposing merely a minor set of inconveniences -- a mixup of the lawn mowing schedule, mud tracks into the house, wet dog walks, and overgrown weeds, but not much else. Similarly, we felt the tug of the "out of sight, out of mind" psychology -- the kind that encourages you to simply ignore the damage just a few miles away. During emergencies, such a defense mechanism is particularly reassuring because it allows you to lament damage to roads and homes, but to also tell yourself that there's nothing to personally worry about because you are at a safe distance from that destruction.

The amount by which this (flood) event has exceeded past events suggests that manmade warming may have played some role by making the event worse than it would have otherwise been ...

Why? Because we live in a state where the fossil fuel industry's "drill and frack first, ask questions later" attitude reigns supreme, and that means the flood has raised the prospect of major spills and leaks. In practice, that could translate into widespread consequences for us and everyone on the Front Range -- consequences that could be as severe as destruction of personal property. We're talking water contamination, food contamination and all sorts of other exposure to toxins. That kind of thing can, to say the least, create long-term health hazards well after homes and roads have been rebuilt.

Our experience wasn't out of the ordinary or special. It was entirely typical for many people living on the edges of the disaster zones in Colorado, just as it is typical for lots of people living near those zones during other cataclysms. Those experiences all lead to a conclusion best summed up by an old cliché: When it comes to something as monumental as climate change, you can run, but you can't hide. That conclusion should consequently lead to another cliché: Whether we like it or not, and no matter where we live, we here on Spaceship Earth are all in this together. And the good news is that there are some pretty basic, nonpartisan, non-ideological things that can be done, even beyond the immense task of trying to reduce climate change-exacerbating carbon emissions.

At the state and local level, environmental regulators can stop behaving like de facto lobbyists for ecologically hazardous industries; legislators can pass -- rather than reject -- necessary proposals to tighten oil and gas regulations; siting authorities can employ the "first do no harm" idea before permitting more energy development in areas like floodplains; and local officials can be given more power to oversee the fossil fuel industry within their midst. Most important, all of them can finally reject climate change denialism and begin factoring in meteorological reality when making energy development decisions.

That last necessity is where the federal government can play a special role. As a recent Government Accountability Office report documents, state and local "decision makers have not systematically considered climate change in infrastructure planning." According to the report, fixing that problem requires "the federal government to improve local decision makers’ access to the best available (climate-related) information to use in infrastructure planning." It stands to reason that when public officials are armed with such information, there's at least a better chance that they will make more sound decisions -- such as, say, opting against permitting $4 billion worth of oil and gas rigs in a flood-prone basin.

Now, sure, you can roll your eyes and come up with some inane logic to reassure yourself that you personally have nothing to worry about. That's the easy thing to do, because then you don't have to deal with any fear. But when many of the solutions are so straightforward and when the consequences of inaction are so severe, is that really prudent? There's are thousands of flooded oil and gas rigs here in Colorado that suggest it isn't.