The assassination of an atheist

For over two decades, Dr. Narendra Dabholkar worked to overcome superstition in India. And it cost him his life 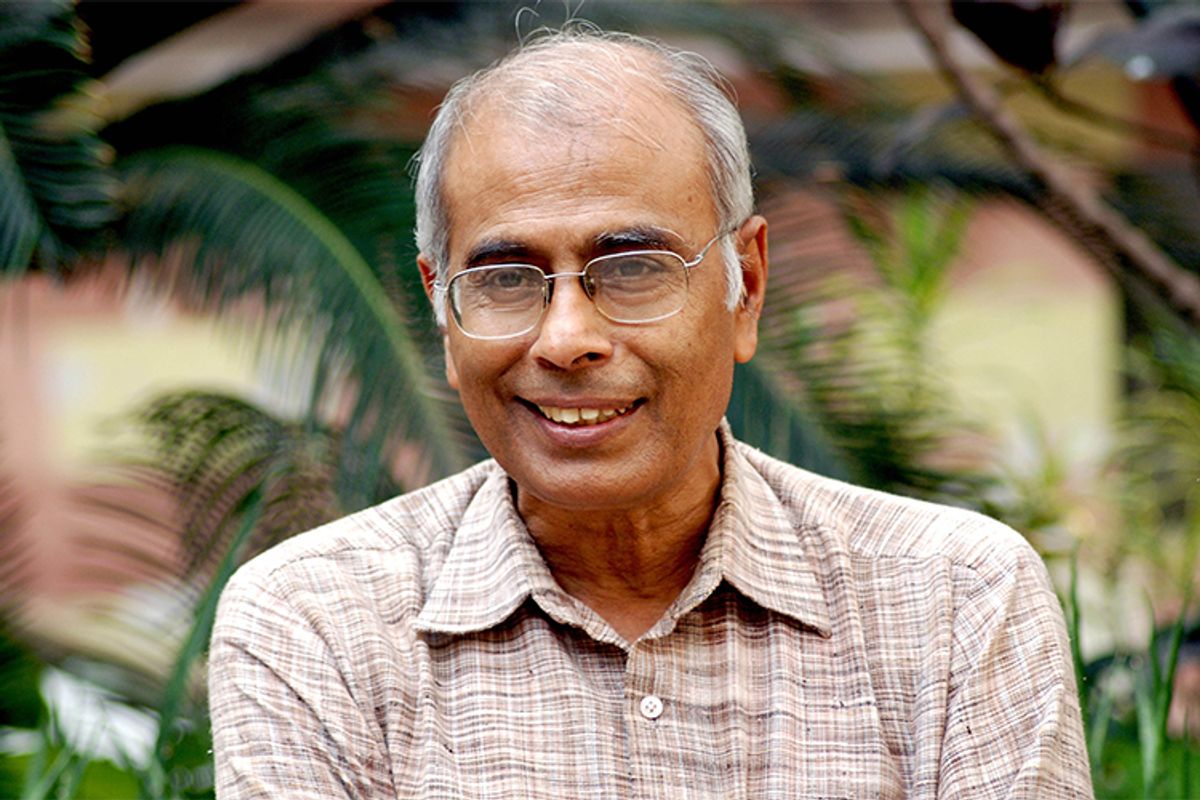 A great skeptical leader has been assassinated.

This didn't happen in a tyrannical theocracy. This happened in a modern, supposedly secular nation, with no state religion, and with first-class programs of science and medicine. And still, for the crime of criticizing religious beliefs, questioning them, and subjecting them to scientific scrutiny, a great skeptical leader was gunned down on the street in broad daylight.

For over two decades, Dr. Narendra Dabholkardedicated his life to overcoming superstition in India. Originally a medical doctor, Dabholkar spent years exposing religious charlatans, quacks, frauds, purveyors of "miracle cures," and other con artists preying on gullibility, desperation, and trust. An activist against caste discrimination in India, and an advocate for women's rights and environmentalism, Dabholkar's commitment to social justice was expansive and enduring. But it was his work against superstition that earned him his fame.

India is a huge, hugely diverse country, and much of it -- particularly the south -- is thoroughly modern, urban, and largely secular. But much of the country -- particularly the north -- is saturated with self-proclaimed sorcerers, faith healers, fortune tellers, psychics, gurus, godmen, and other spiritual profiteers. In parts of the country, people are beaten, mutilated or murdered for being suspected of witchcraft, and there are even rare cases of human sacrifice -- including thesacrifice of children -- in rituals meant to appease the gods.

Throughout this country, Dabholkar traveled to towns and villages, investigating claims of miracles and magic, revealing the physical reality behind the tricks -- and organizing travelling troops of activists to do the same. He didn't try to persuade people out of the very idea of religious belief, but he was an open atheist, proud and unapologetic. He was the founder of the Committee for Eradication of Superstition in Maharashtra (Maharashtra Andhashraddha Nirmoolan Samiti). He fought for years for the passage of a controversial anti-black-magic bill in India.

And it was his work against superstition that almost certainly cost him his life. On August 20, at seven in the morning during his morning walk, two men ran up to him on the street, shot him four times, and drove off on motorbikes that had been parked nearby. He was 67. As of this writing, there has been one arrest made in the case -- Sandeep Shinde, a member of the hard-line right-wing Hindu organization Sanatan Sanstha.

A little background on Sanatan Sanstha. They are repeatedly referred to by the Times of India as "right-wing Hindu organization, Sanatan Sanstha." In 2011, two of its members were convicted of the 2008 bombings of two theaters -- bombings that were committed "because the movie and the play showed Hindu gods in a bad light." (Four other group members were also arrested for the bombings, but were not convicted.) Their literature speaks of converting India into a divine kingdom ruled by themselves, and of "destroying evil by all means, even by laying down one's life." Sanal Edamaruku, another experienced debunker of superstition in India (and a longtime friend and colleague of Dr. Dabholkar), described them to me as "a fanatic (or rightly, fundamentalist) Hindu group."

The organization is a strange blend: a fringe extremist group that nevertheless wields significant cultural influence, like a mashup of Operation Rescue and the Catholic League. As atheist/ skeptical activist and blogger Avicenna (from the A Million Gods blog) commented, "Sanatan are basically one of the many organisations of 'Hindu Supremacy.' They are generally called Saffron Terror in India." At the same time, Avicenna noted, "they often shut down any movie considered progressive" -- with the result being that "Indian movies have actually gotten more and more conservative." But despite the influence that they wield, a campaign to ban the group has been seriously considered by the Indian government -- despite the strong religious sentiment in the country, and despite the country's commitment to freedom of religion, even at the cost of giving religious charlatans free rein.

And when Dabholkar was murdered, Sanatan Sanstha responded by saying that his murder was deserved: that "everybody gets the fruit of their karma," and that "instead of dying bedridden through illness, or after some surgery, such a death for Dabholkar is a blessing of the almighty." (Note: As of this writing, the Sanatan Sanstha website has been "shut down for some days" -- supposedly due to "technical problems.")

A member of Sanatan Sanstha has been arrested for Dabholkar's murder. But an arrest is not a conviction: the investigation is still in its early stages. And Dabholkar had many enemies. Faith healing, fortune-telling, miracle potions, the promise of intercession with the gods, and the sale of charms, amulets, and other supposedly magical trinkets are all Indian Mythbusters are hardcore.") He hadreceived threats from multiple right-wing Hindu groups, and had even been beaten by followers of gurus whose "work" he had debunked.

It would be easy to dismiss the assassination of Dabholkar as an anomaly, a freakish act of a freakish fringe group, with no more cultural or political significance than any other senseless murder. But this incident is not a random outlier, and it does not come out of thin air. Overt hostility to any questioning of religious and spiritual belief is all too common in India -- to the point where it even gets enforced by the law. Popular skeptical debunker Sanal Edamaruku has beenin exile from India for over a year -- charged, literally, with the crime of blasphemy. Author and translator Matcha Laxmaiah (Krantikar) was arrested several years ago, under the same blasphemy law, for translating some of the works of Salman Rushdie, Taslima Nasreen, and other critics of Islam. And in November of 2012, Shaheen Dhada and Renu Srinivasan were arrested, again under this same blasphemy law, for criticizing the shutdown of Mumbai during a Hindu leader's funeral.

This is not an anomaly. Yes, it is an extreme act, and it is being widely condemned around India. But it is not an insignificant anomaly -- any more than the murder of abortion doctors in the United States.

And if you're in the United States, and you're thinking this could never happen here? Think again. The parallels between India and the United States are eerie. Both are modern states, world leaders in science and medicine. Both are secular states -- in theory. In practice, both have serious problems with separation between government and religion, and government endorsement of religion on both small and large scales are commonplace. Both are large, hugely diverse countries, with cultural divides showing up along geographic ones: both have regions that are more prosperous, technological, educated, and secular... and regions that are more steeped in poverty, more rural, less educated, and more religious. Both have cultures deeply entrenched in religious and spiritual belief... cultures which, much of the time, are actively hostile to established scientific thought, and indeed to the very idea of science and the scientific examination of religious or spiritual claims. Yet at the same time -- and probably not coincidentally -- both have rapidly rising rates of religious non-belief, with active, vibrant skeptical and atheist communities that are growing more visible by leaps and bounds.

So it's not surprising to find both countries deeply involved in a culture war about religion. Not a war between competing religions, but between religion and the lack thereof: between religion and those willing to criticize it, question it, scrutinize it, demand that it show evidence for its claims, and expose its more blatant frauds to the cold light of day.

Narendra Dabholkar is not the first martyr of atheism, skepticism or secularism. In 1600, Giordano Bruno was burned at the stake for arguing, among other things, that the sun was just one star among many; in 1697, Thomas Aikenhead was hanged in public in Scotland for stating privately to friends that he thought the Bible stories were fables. Dabholkar is not even the first martyr of the modern-era atheist and skeptical movement: earlier this year, four people were killed and over 200 injured in anti-atheist riots in Bangladesh, and atheist blogger Rajib Haider was brutally murdered in Bangladesh for criticizing Islam and advocating secular government. But he is almost certainly, by far, the most prominent public figure in the modern skeptical movement to be assassinated.

Narendra Dabholkar is not the first, but let us hope he is the last. And we should not simply hope for this -- or pray, or consult fortune tellers, or purchase amulets that we're told will ward off assassination. We need to work to create a world where this will never happen again.