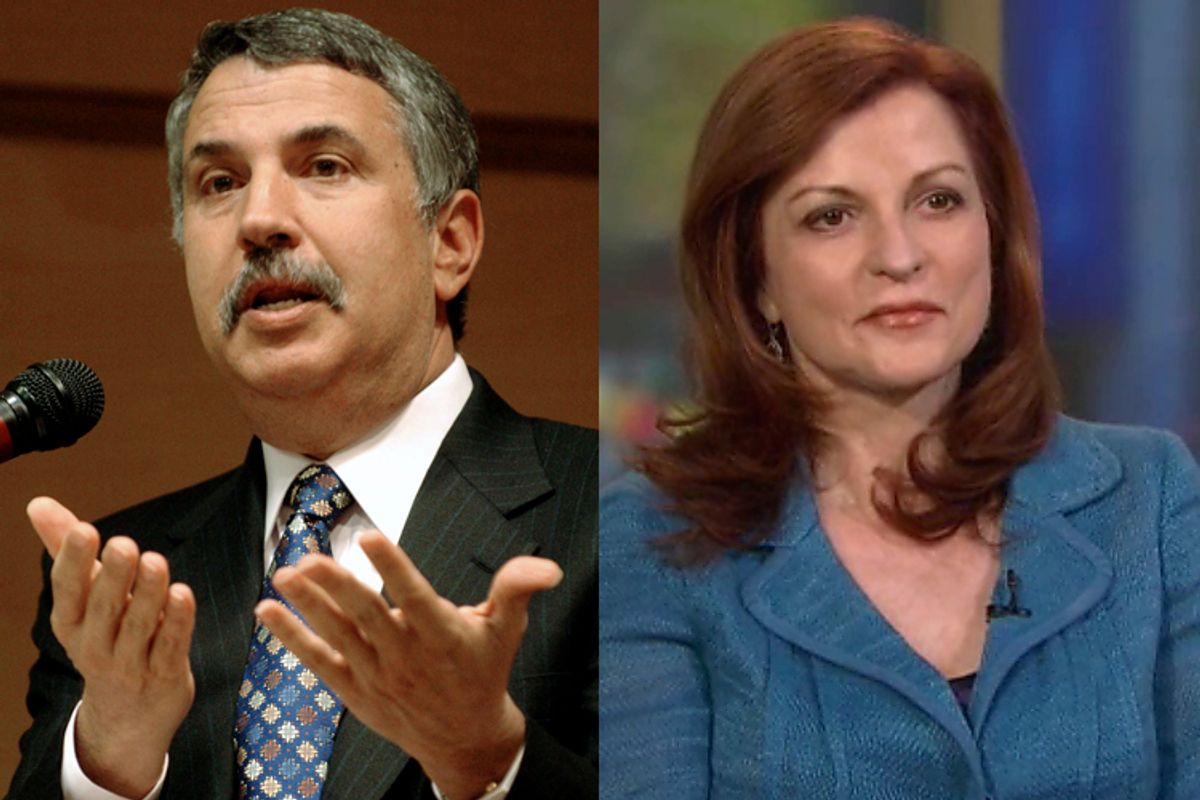 Thomas Friedman and Maureen Dowd, two of the most influential opinion columnists in the nation, are bad opinion columnists. Friedman is facile and dull. Dowd is snide without being witty, repetitive, and an occasional plagiarist, and worse. Today, they both have new columns in the New York Times. Both are bad. Not their worst work, but perfectly representative of what makes each of them bad. Which one is worse? Let's investigate, together.

Here is Thomas Friedman's "lede," silly journo-speak for "first sentence": "I was at a conference in Bern, Switzerland, last week and struggling with my column." Has ever a more Friedmanesque sentence been published? Are we sure this isn't Matt Taibbi savagely parodying Friedman?

The column revolves around an incomprehensible metaphor about hair. Thomas Friedman saw a man with pink hair, and that hair Explains The Middle East, as so many things that Thomas Friedman sees or hears do. Here are some more words from this column:

The argument that the column puts forth (once we get around to it) is not even entirely wrong -- not "wrong" in the way that Friedman's columns advocating war with Iraq were wrong, at least -- but that's because his thesis is "Syria is hard and Vladimir Putin is a pretty important guy." That's where we end up, after the hair business. "On my vacation I saw a guy with weird hair and boy this Syria thing is a tough egg to crack, by Thomas Friedman, world's most influential columnist, age six."

Maureen Dowd's column begins by taking Obama to task for sticking to his prepared remarks in an address that he gave the day of the mass shootings in Washington, D.C. As she says:

But, jarringly, the president went ahead with his political attack, briefly addressing the slaughter before moving on to jab Republicans over the corporate tax rate and resistance to Obamacare.

That is a fine, reasonable "hook" for a column. But ... it's not what her column is actually about. The column is about how Barack Obama is "passive," "reactive," "not engaged," "muddled and entrenched," etc. It is, in other words, a very conventional Maureen Dowd column that she has already written a thousand times, with a horrible crime sort of thrown in at the beginning.

After the seventh paragraph, less than halfway through the column, Dowd doesn't bring up the shootings again, not even in her kicker (silly journo-speak for "last sentence or paragraph"). After you attack a politician for being political in the face of tragedy, should you then spend the rest of your column attacking him for being ineffective at delivering his political message? "The president ignored the tragedy that I'll briefly wield as a cudgel against him before dropping it entirely and moving on to criticizing him for being unable to persuade people to support his preferred policies." She criticizes Obama for being "reactive" almost immediately after criticizing him for not dropping everything to react to a developing news story.

“I think that folks here in Washington like to grade on style,” Obama said dismissively of his Syria critics.

But why is it so often the president’s style to be unable to sell the substance — even on issues where most people agree with him?

OK, but the problem here is that the issues discussed in this column -- Syria and the appointment of Larry Summers to head the Federal Reserve -- were political "failures" for Obama very specifically because most people did not agree with him. Most Americans did not want to attack Syria. Most interested observers and many members of Congress did not want him to appoint Larry Summers. I actually don't know what issues Dowd is referring to here, because if it is Syria that is just a strange and incredibly incorrect interpretation of what happened.

Here is the best part of this column:

Top Democrats who used to consider Obama one cool cat now muse that he’s “one weird cat,” as one big shot put it.

Who. Who said that. What "big shot" said Obama is "one weird cat." And why are they anonymous. Was it Thomas O'Malley?

So, which one is worse? The winner is both of them. They are both bad columnists in their own unique and special ways. (The winner is also Thomas Friedman because "pink hair," come on.)