4 things that lower your testosterone

Recent research aside, big testicles won't make you a bad dad. But parenting might lower your hormone levels 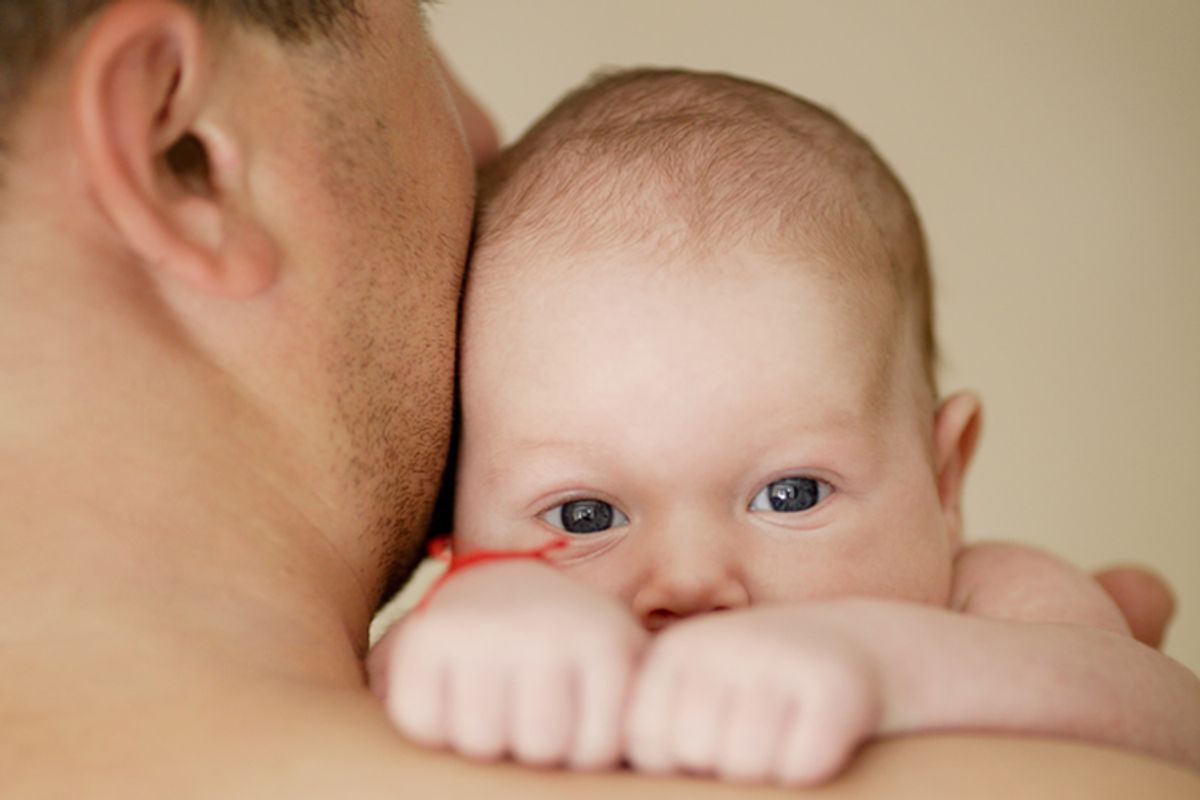 “OMG honey, I'm just so exhausted from all this spermatogenesis. I can't possibly change that diaper.”

This is the take-home message of a new research finding, summarized here at Salon with the headline, “You may be a terrible dad because you have enormous testicles.” The study found that the testosterone levels of fathers, along with the size of their testicles, correlates with brain scans measuring positive responses to their children and caretaking activity at home.  The scholars hypothesize a reproductive strategy trade-off: some men try to maximize the chances of passing on their genes by having lots of babies (hence those large testicles and, presumably, large loads) or having just a few children but investing in their long-term survival (hence the part where they actively love and care for their kids).

By and large, both the scholars and the media seemed to assume that the data meant that some men were biologically prone to being good dads and others weren’t.  Dr James Rilling, one of the authors of the study, said that the research “tells us some men are more naturally inclined to care-giving…” and concludes that, “It just might require more effort for some than others.”  They frame their research, in other words, with the question, “Why do some men choose not to invest in their children?”  Their tentative conclusion is that men are driven to make that choice by high levels of testosterone.

But is the only way to interpret the data?  Not at all. Some really interesting and sometimes pretty funny research suggests the opposite might be true.

Haunting the story is a stubborn biological determinism that goes something like this: if we identify a biological trait that correlates with a social one, the former must be causing the latter.  It is as if we believe that biological traits are all immutable: impervious to and unrelenting in the face of environmental influences.  Accordingly, whatever we observe in society must be the product of biology and not the other way around.

Wait, the other way around?  This is the idea that sociocultural forces actually change our biology.  In this case, the interpretation would go something like this: in families in which men actively parent their children, an evolutionarily adaptive strategy of investment in existing offspring would kick in; in contrast, in families in which men were absent or only marginally involved, an alternative evolutionary strategy of disinvestment and “spreading one’s seed” would manifest.  In this scenario, men have two strategies for maximizing their reproductive success, but the strategy they end up using isn't determined by biology.  Instead, men’s bodies respond to their social environments, allowing any given man to adapt to either involved or uninvolved fatherhood.  Moreover, it would enable him to alter his reproductive strategy (and the size of his testicles) over the course of his life as he encountered different opportunities.

Men, then, would be evolutionarily prepared to take advantage of whatever reproductive opportunities were available. Now that sounds like a great way to maximize success.  Is there any evidence, though, for this type of phenomenon?  Yes, lots.

First, we know that men’s hormones respond to experiences. Want to raise a man’s testosterone level?  Let him drive a Porsche.  Want to raise it higher?  Let him drive it in front of other people.  Even higher?  Let him drive it in front of a small collection of supermodels. I confess, the last is just speculation.  The first two experiments, though, are real.  When we enable men to perform an activity that we’ve collectively agreed enhances men’s status, their hormones respond.  Interestingly, if they don’t care about sports cars, there’s no effect. They have to buy the hype.

Testosterone also responds to metaphorical kicks in the balls.  If a person experiences a sudden drop in status, like the kind that happens when one enters boot camp, levels drop.

Likewise, even though testosterone is somewhat related to aggression, measuring men’s levels before a physical contest won’t predict the winner. You can tell who lost, however, after the game.  The loser’s levels of testosterone will go down, the winner’s will go up.  Men, then, are biologically programmed to respond to failure and success.

The effect of wins and loses has not only been documented in the case of physical competitions, but also largely mental games like chess, symbolic contests like video games, and entirely vicarious experiences like watching a favorite sports team win or lose on TV. In other words, contrary to what you might think, there is a lot riding on whether the Lakers win.

And, yes, there's data on parenting behavior. The testosterone levels of the majority of men decrease when they fall in love and start nesting. They decrease further when they have a child.  But – and here’s where we get back to the sperm-heavy and diaper-disinclined – the testosterone levels of new dads only decline if they are actively involved with their children.  We find this effect in individual men and also entire communities.  We see lower average levels of testosterone in societies where men are highly involved in parenting as a matter of cultural practice, and lower levels where they’re disengaged.

This effect is entirely consistent with the new research on testosterone levels, testicle size, and parenting behavior, except it points the causal arrow in the other direction.  Dads aren’t necessarily doomed to underwhelming parental investment by high testosterone levels; their decision to be uninvolved, however – or the experience of being shut out of active parenting by family dynamics, demands at work, or other social factors – can lead their bodies to opt for an alternative strategy.

This is a much more optimistic interpretation than the one that has dominated media coverage.  It means that men are biologically programmed to nurture, if they are allowed and bother to do so.  (Shhhhh, in this sense their biology is a whole lot like women’s.)

It also means that, as a society, we can do things that increase the chances that men will stick around and invest in their offspring, like changing cultural expectations for fatherhood, offering paternal leave to new dads, and encouraging workplaces to offer flexible work hours.  Biology is not immutable.

Of course, the real story is probably more complicated than this.  The causal arrow likely goes in both directions, and some wonky other directions as well.  Acknowledging the fact that our biologies don’t just shape behavior, but respond to our experiences, though, is a great first step toward gaining a stronger understanding of human nature and building better societies.