America's "reality" is white and male

From Julie Chen to Marissa Alexander, women of color are constantly treated like their feelings aren't real 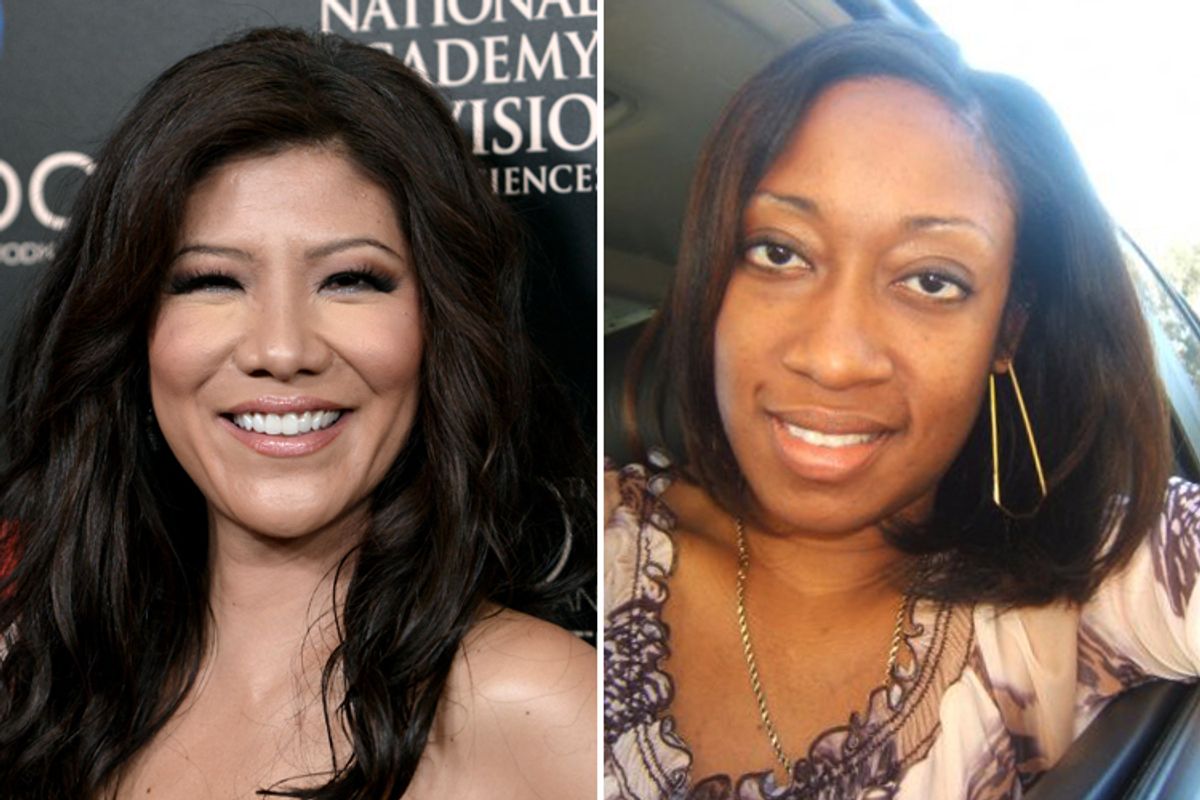 The media has reacted to Julie Chen’s revelation that she underwent “double eyelid surgery” twenty-five years ago with the same discomfort most of us probably have when imagining a surgeon taking a scalpel to our eyelids.   Rather than risk examining the complicated racial and gender politics involved in Chen’s story, outlets that can be counted on to publish multiple analyses of Miley Cyrus at the VMAs or the latest New York Times trend piece on women’s sexuality seem to have shuddered and looked away.   But Chen’s story deserves more than the sensational before-and-after coverage of the tabloids (now with added nose job speculation!) or the half-hearted shaming from the few feminist blogs that did cover it.  What happened to Chen when she was twenty-five years old is something that happens to women of color every day in our society: the willful misreading of bodies of color.  This intentional misinterpretation is a key tool used by the white patriarchy (it’s still here, Hanna Rosin, accept it) to control and oppress those bodies’ owners.

The misinterpretation of Julie Chen came from her news director at a local news station in Dayton, Ohio.  When Chen asked for an opportunity to fill in on the anchor desk, he told her that, because she was Chinese-American, she was both un-relatable to a white audience and, somehow, looked wrong.  Chen quoted him as saying, “Because of your heritage, because of your Asian eyes, sometimes I’ve noticed when you’re on camera and you’re interviewing someone, you look disinterested.  You look bored.”

What’s striking to me about this interaction, aside from the blatant bigotry, is the way the news director is willfully misreading Chen’s facial expressions.  He knows that she is neither disinterested nor bored, but he uses her race as an excuse to project those stereotypical traits onto her face.  The difference between her body and a white body becomes the rationale for denying Chen the chance to advance in her career.

When a “big-time agent” gave Chen a similar critique and an ultimatum – undergo East Asian blepharoplasty surgery to look less Chinese or he wouldn’t represent her – Chen acquiesced.  That these men wielded enough power over Chen’s career prospects to convince her to allow a surgeon to slice into the thin skin of her eyelids and reshape her appearance is astonishing when you consider that no manager or agent has ever managed to convince Sam Donaldson to wax, thread, pluck, or in any way tame his eyebrows.

The intentional misreading of the bodies of women of color is pervasive in our society.  Take, for example, the case of Cherice Moralez, a 14 year-old Latina girl who was raped by her 50-year-old teacher and committed suicide at the age of 16.  Judge G. Todd Baugh, a white man, sentenced the rapist, also a white man, to serve only 31 days of a 15-year sentence in jail, explaining that Moralez was “older than her chronological age” and “as much in control of the situation” as her rapist.  Biologically, legally, temporally, and by any other objective measure, Moralez was 14 years old at the time of her rape, but Judge Baugh perceived her body as being “older.”  Thanks to his position of power in our justice system, Baugh’s subjective reading of Moralez’s body was privileged over the objective reality.  Moralez’s Latina body instantly became un-rapeable.

The interpretation of Alexander’s actions as assaultive by her prosecutor, judge, and jury is directly linked to her race.  Reading blackness as threatening is a cornerstone of American white supremacy, and one that forms a basis for the mass incarceration of black men and, increasingly, black women.  The perceived aggression of black bodies is not exclusive to women.  An obvious example of the intentional misreading of black men’s bodies is the outrageous (and unconstitutional) number of Stop and Frisks carried out by the NYPD due to “furtive movements.”(Stop and Frisk takes this phenomenon to a higher level by criminalizing the intentionally misunderstood behavior of, say, walking.)

But the refusal to see Marissa Alexander as the survivor of domestic violence that she is -- by her husband's own admission -- derives from the intersection of her race and gender.  Just as Moralez was not allowed to be a child, Alexander was not allowed to be afraid.  The subjective experience of the white male default became the basis for reality, objective reality be damned.

Not every instance of intentional misinterpretation results in rape, suicide, or incarceration – Cherice Moralez and Marissa Alexander’s experiences are at the extreme end of a spectrum that also includes Julie Chen, Tiana Parker – the 7-year-old Black girl who was sent home from school because her dreadlocks were deemed not “presentable” and “faddish” -- and every woman of color who has been forced to explain that she is not the emotionless, overly emotional, angry, hypersexual, aggressive, inscrutable, or insane person someone else has perceived her to be.   And not every misreading comes directly from a white man in a position of power.  One insidious aspect of the hegemonic white male gaze is how it has been adopted and internalized by the same people it victimizes.

In her confession, Chen described this process of internalizing racism: “I started recording the newscasts every single day and running home and watching myself, watching my video.  All I could see was my eyes.  [I thought,] ‘Does he have a point? Do I look bored or disinterested?’”  This is the power of the intentional misreading: it leads women of color to question our own reality – a train of thought that can lead to questioning our value and our very humanity.  If we can’t believe in the reality of our own interest or engagement, what happens to more complicated emotions like fear, or shame, or desire?

Nearly twenty-years later, Chen has adopted the language of her own oppressors.  Looking at her own before-and-after pictures, she told the audience of The Talk, “The eyes are bigger.  I look more alert!”  Chen is now accepting the subjective reading of white men as a valid reality, and this is perhaps an even greater injury to her self than the surgery she does not regret.  But this is where Chen is actually wrong, just as the news director who thought she was disinterested was wrong, and the judge who thought Cherice Moralez was older than her years was wrong, and the prosecutor who thought Marissa Alexander was not afraid for her life was wrong.  It can be exhausting and disheartening and painful and hard, but until we are able to dismantle the white patriarchy that is so frequently and insistently wrong, the least we as women of color can do for ourselves and each other is to remember that what we are actually saying with our bodies is one thing that is real and absolutely right.