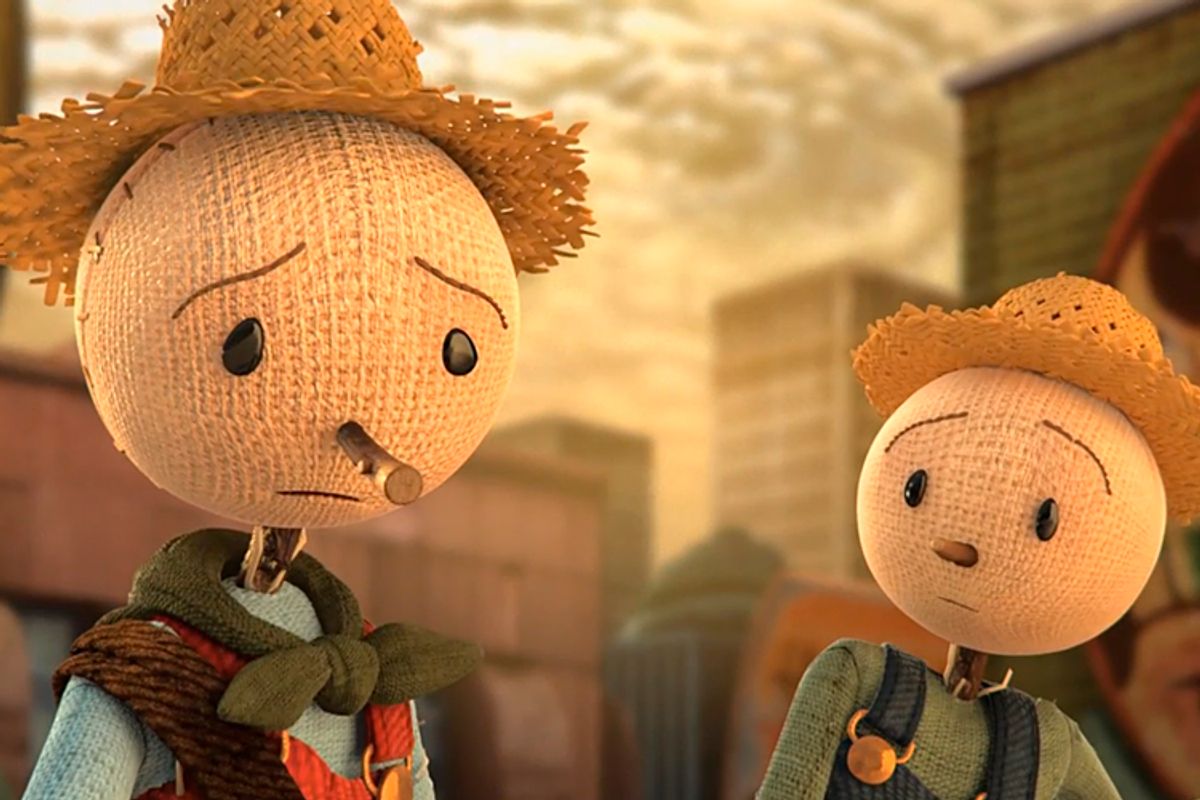 As a piece of buzz-worthy art, Chipotle's new three-minute ad (and attendant smartphone game) is no doubt a masterpiece. It is everything that all the worshipful articles about it say it is -- beautiful, inspiring and politically significant for how it openly derides factory farming. What most of those articles don't say, however, is that it is either a deliberate endorsement of a plant-based diet or it is a deceptive attempt to appropriate the morality of vegetarianism and ascribe it to meat-based business.

Watch the ad here, and in particular, look for the subtle shift in food groups between the scenes in the city and the scenes back at the scarecrow's farm:

Notice that the scarecrow is rightly appalled not just by the mechanized and biologically twisted factory-farming process. He seems appalled by the Crow Industries' entire meat-based operation, as evidenced by his (and our) horror culminating in that moment when he looks the terrified cow in the eye. Yes, the emotional tug of that climactic scene comes not just from the cow being hooked up to a machine, but from the cow being a living thing that is on its way to being killed, all so that some jolly fast-food eater gets to shove another hamburger down the gullet.

This is the point in the ad where things get really interesting. After his moment with the cow, the scarecrow heads home and discovers a solution -- one that makes a very specific statement. Starting with one of Chipotle's iconic peppers, he harvests his garden, but -- importantly -- we do not see him in an abattoir looking into the eyes of a terrified chicken or cow just before he kills it in a more natural fashion than Crow Industries. Instead, he heads into town with a truck that looks like it is exclusively full of vegetables. Then, save for a fleeting and blurry background glimpse of what may be a chicken in the kitchen (that the scarecrow is most certainly not cutting), we don't see any prominent reference to a meat-based diet. He then he presents what could easily pass for a vegetarian dish.

In other words, his solution to the meat-producing factory farming system he hates is not just a meat-based system that slaughters animals in a more humane fashion -- but a plant-based system that wholly avoids such slaughter. The contrast between the first and the second half of the ad is the story here. The first half is all about meat eating and animal killing, while the second half -- the solution part -- has nothing to do with meat eating and avoids blatant references to the act of killing animals.

Remember, the spot is set to a song by Fiona Apple, a vegan and animal rights activist. Considering that, and considering the spot's clear anti-meat story line, it is revealing that most of the press surrounding the ad hasn't even mentioned its vegetarian message. What that omission illustrates is that in a country where only 7 percent of people consider themselves vegetarians or vegans, many of the other 93 percent don't even recognize legitimate criticism of meat consumption, even when that criticism is in their faces. The omission also probably exemplifies a larger "nah nah can't hear you!" hostility toward any attempt to question meat consumption, whether those questions are about the morality of killing animals or simply about meat consumption's effect on the environment, carbon emissions,energy supplies, water resources and public health.

So did Chipotle mean its ad to be such an explicitly pro-vegetarian message, only to see that message ignored by media outlets and much of its audience? Or did company executives design the ad with a two-pronged calculation? Were they calculating that: 1) the controversial and explicit vegetarian message would be ignored, but 2) that the audience would nonetheless implicitly ascribe the kill-free merits of vegetarianism to the burrito vendor's products? Put another way, in a self-serving bit of trickery, were they actually trying to subtly conflate opposition to factory farming with full-on opposition to eating meat, even though those two things are fundamentally different?

It is impossible to know, but signs point to the latter. After all, while Chipotle has made encouraging moves to put more vegetarian and vegan fare on its menu, the company has no announced plans to reduce the meat fare at its restaurants. Additionally, the company's pinto bean controversy in 2011 suggests the company is interested in seeming vegetarian without actually being vegetarian. In that episode, Chipotle was humiliated for its refusal to identify the seemingly vegetarian beans on its in-store menus as not vegetarian at all.

In a sense, this new ad seems like visual extension of that same chicanery. It seems like Chipotle wants to gain credibility from its stand against factory farming and make that stand seem as principled as being against meat consumption -- without actually being against meat consumption and without facing the inevitable (and lamentable) criticism of taking a truly vegetarian position. To do that, the company has to try to effectively equate opposition to factory farming with opposition to meat consumption, even though doing so is dishonest.

Of course, as a someone who became a vegetarian, in part, out of my disgust at the mistreatment of animals, I'm actually psyched that there's at least one major fast-food company willing to publicly rail against factory farming methods. I'm psyched because factory farming methods are grotesque for many reasons, not the least of which is the way they treat animals. So the more voices raised against such methods, the better, and I say that under no illusions that Chipotle is mounting such a campaign for any reason other than profit opportunity. The company clearly sees a chance to boost its bottom line by building a brand based on support for more humane treatment of animals. And you know what? To paraphrase the old saying, it's a good thing when a business sees a chance to do well by doing right (or at least, better than others).

But that's no excuse for a bait and switch that clouds the facts. And in this case the facts are clear. In terms of the environment, health and morality, opposing factory farming -- while laudable -- is just not the same as embracing a plant-based diet. Indeed, no matter how it is farmed, meat is still energy intensive, it still poses serious health problems when consumed in American-level amounts, and it only gets to your plate by killing an animal. Implying otherwise makes it harder for our society to have a much-needed discussion about all the difficult questions that surround both our farming methods and our eating habits.