Dear Walt: I feel your pain 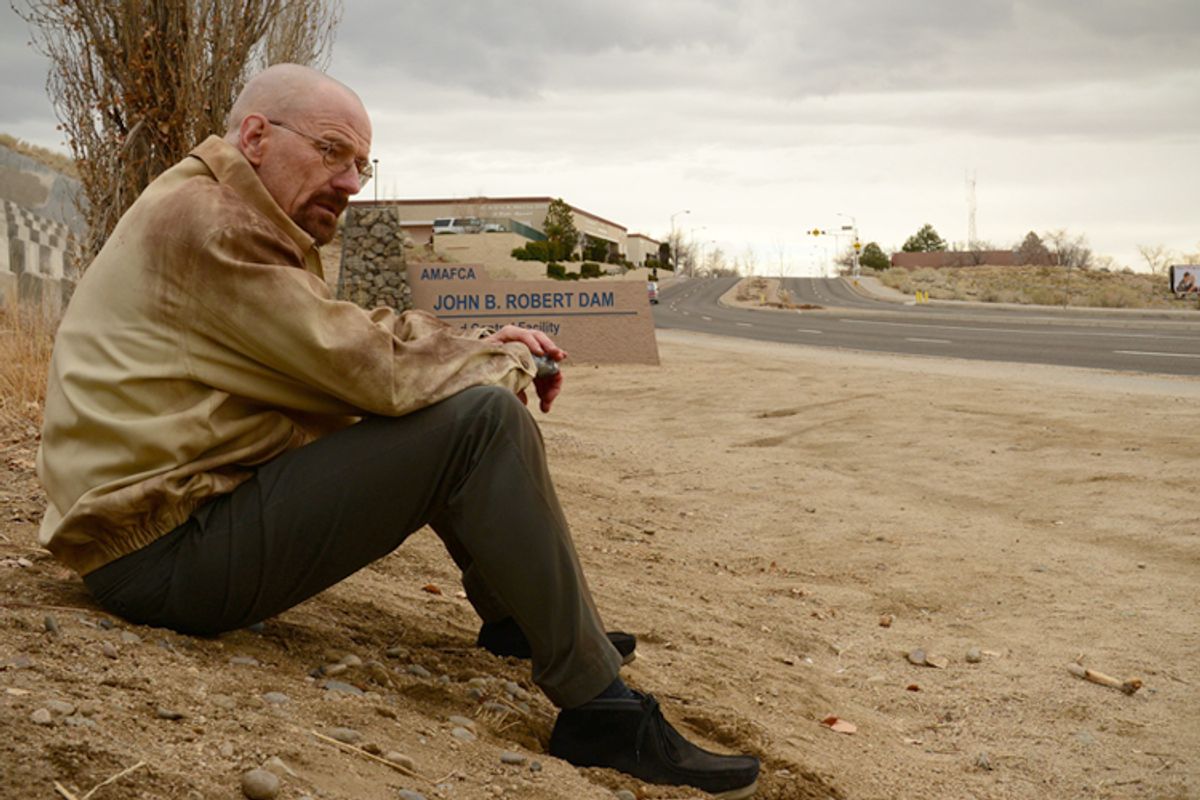 I know you didn't ask for my advice but I've been thinking about you. I sense that life has been tough for you. Things have gotten a little off track. You had a dream. Teach kids chemistry. Raise a family. Noble dream. Good man. But stuff happens. Cancer. Jesse Pinkman. Things happen, Walt, and we respond.

We've all been there. You're cooking meth in your underwear in an RV in the desert and some random impurity blooms in the cook and compounds scatter or wrongly cohere or shoot off or crystallize into non-meth-like forms, or something burns and next thing you know there is shooting and things blow up and people die horrible deaths.

I know, I know. Things happen. And we move on. But who gets blamed? You. And who has to make up outrageous lies to keep everyone calmed down? You. And sooner or later you find you're trapped in this web of lies. All because you're just trying to take care of your family and make a decent wage.

We've all been there, pal. It's not easy -- not for you and not for all the other psychopaths who just want to be left alone to cook meth in their underwear.

But here is the thing. You do not have to be alone with your pain, my friend. I am here for you, Walt. I get it. You see a severed head in the desert riding on the back of a tortoise through the burning sands and you feel it's a message meant just for you. And maybe it is. But this feeling you have that it's Walt, alone against the world. That's not really it. We're here for you, man. You may think we don't get it but we get it. Like nobody's ever seen a severed head riding a tortoise through the desert before.

Come on, man. The history of the world is long.

We've all had our meth lab explosions and our mass shootings and the severed head riding the tortoise and we've all had to poison the occasional kid. It comes with growing up.

So go easy on yourself, Walt. You can't take all the troubles of the world on your shoulders.

You need to relax.

So, actually, this nice trip you've decided to take in the red minivan, that is a good sign. I for one am glad to see you finally getting some Walt time.

You will never make everyone happy. You run around trying to protect everyone from everything but you have to realize, this is the world, man. You can't protect everyone. People are going to be blown up by bombs that you hide in things, and people are going to get shot up in horrible ways by you and that's just how life is. I know you feel responsible, a little bit, for all these terrible things that you have to do. But remember: You're a psychopath. You can't take it all on your shoulders. That's not what being a psychopath is all about, Walt.

I think in your heart you know this.

I am behind you, man. I mean, good for you for having the courage to steal that baby. Good for you. Under the circumstances, what else were you to do. They really sort of drove you to it, with their carping and their lack of trust.

You do so much for that family of yours. So  go on, steal that baby. Leave that baby in a fire truck. Good for you.

To me, that sounds like you are finally forming some boundaries.

So don't be so shy about it. Don't hide your light under a bushel, Walt! Look at you, hiding things behind electrical outlets and in toilet tanks and so forth. You know what we say: "You're only as sick as your secrets," Walt.

I know you have felt taken advantage of. You may have trusted too much. You were too trusting. That is what happens to some of us. We take the world on our shoulders. We think we have to do all the poisoning ourselves. But that's not how it is. Jesse could help you. Gus, too, for a time, could have helped you more if you had reached out at the right time. It's that self-righteous streak that'll get you every time.

Have you ever taken the Myers-Briggs Personality Inventory, Walt? It could show you some things about your personality that might surprise you. It's worth looking into.

I mean, you poor man. Really, you are just a  bottomless pit of need, poor man! You try to fill that need by giving your family cars and vacations and barrels of money. But that will never fill the endless vacuum you feel INSIDE, my friend. It's an inside job! If you would go to an Al-Anon meeting or two you would come to understand that no matter how much you do for your family, they will still not love you the way you need to be loved.

Here is what I suggest. You need more alone time. Find an hour. Check your calendar. Make sure there are no severed heads riding tortoises across the desert and you do not have to cook any meth in your underwear and you are not hiding under a car being shot at. Just find some quiet time and get a pencil and paper and begin writing. Write about your fears, Walt. Write about the things that you wish you could have.

This will calm you down and help you see that no matter how much you think you need to overdo things, you actually are fine just the way you are. Your perfectionism -- and that's what it is, Walt, that drives you to bury seven barrels of money in the desert -- did you really need seven barrels, Walt? -- do you think accomplishing all these things will make you more loved? I don't think so. You have to let people love you for who you are, not how much meth you can cook in an underground bunker with a state-of-the-art lab, elaborate ventilation and high-tech security systems.

You do this for your family but you don't see, apparently, that no amount of money will make up for what your family really wants, which is just you, Walt, just you, in your strangely chemistry-teacher-type underwear.

I note that you call yourself Heisenberg. Isn't that interesting, since you seem so uncertain about things. So you need to find that quiet place in yourself, Walt, where you are not looking for approval from others or thinking about how to deceive them long enough to keep them useful and then finally kill them. That kind of thinking will just lead you out of your serenity. You need to relax and realize that no matter how well you do this, everyone is going to get killed horribly eventually. That is just the nature of the business.

You are making progress. I really think so. When you finally told your wife off, Walt, I was proud of you. It seemed in that moment that you were surrendering to your own anger. And in the process, paradoxically, you were standing up for yourself. Finally.

But maybe you are overdoing it a bit. Just a tad. Let's try a thought experiment. What would it be like if you did not cook meth? Do you think your family would still love you? I think they would. They might not be quite as impressed. But they would see the real Walt, the Walt they know and feel sorry for. That Walt. The insecure loser.

Walt, it's no sin to be the insecure loser. Embrace that you; embrace that man in his tighty whiteys. That is you, Walt. Don't you recognize yourself? How long has it been since you took a long look at yourself in the mirror when you were not picking glass out of your face or examining a beating wound?

You can be you, and be enough, for you, just like you are. Here is what I want you to do, Walt. Take a deep breath. Yes, right now. Take a deep breath and just tell yourself, Walt, I love you as the insecure and pathological psychopathic loser that you really are deep inside where nobody knows you but you. You have value just as you are. Embrace your value.

You do have some issues. And just look what happens when we don't deal with our core issues. Look at your relationship with Jesse. You do and you do and you do for that young man but he can never give you what you need, because, like many young men, he is just a confused psychotic meth head.

You need to pull back a little, which I think you have done, actually. I think you showed some growth in your willingness to pull back a little from Jesse Pinkman, for being able to regard him with serene compassion when you allowed him to be tortured and beaten and kept chained in a cell. That shows progress, Walt, that you don't feel the need to always rescue him. Good for you, Walt. Good for you for putting some distance between you.

It takes courage to abandon all human decency, Walt. Don't you forget that. While others are slavishly adhering to outmoded norms, you are out there taking chances and doing it your way. Good for you, Walt. Good for you. Just don't carry all the world's burdens on your shoulders. You're not the only psychopath out there.

So as you go off in that red van to start a new life, I hope you remember that no matter what you do or where you are or how many severed heads ride on tortoises through the desert, only you can be you, Walt.

Keep being you, my man. Don't ever stop being you.