How do you get young people to hate healthcare? Why, weird videos with clown versions of Uncle Sam, of course 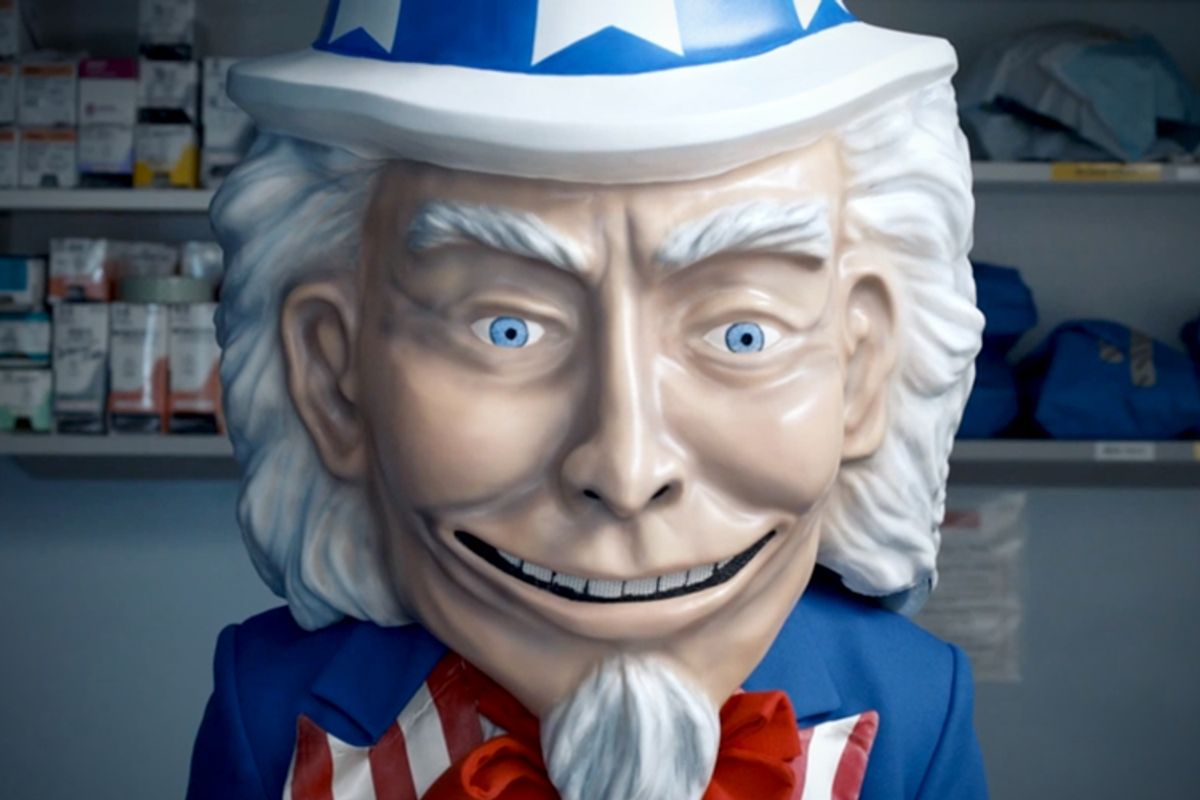 The right wing needs to find a way to get America's young people to destroy the American healthcare financing system. What to do? Let's try some fresh pitches: Dude, are you a young person? Dude, bro, don't get the Obamacare, yo! It's wiggidity-whack. Have Poochie from "The Simpsons" say that in an ad, and it'll be gold. Right-wing organizations are free to buy this idea from me for $500,000, I promise it will work.

In the meantime. There is this group out there, Generation Opportunity. Who doesn't like generational solidarity and/or opportunity? Sounds neat-o. What is it? "A Virginia-based group that is part of a coalition of right-leaning organizations with financial ties to billionaire businessmen and political activists Charles and David Koch," Yahoo! News tells us. Oh. Hmm. What are they up to these days? Trying desperately to kill off Obamacare, like every other asshole. The group's president tells Yahoo!, "What we’re trying to communicate is, 'No, you’re actually not required to buy health insurance' ... You might have to pay a fine, but that’s going to be cheaper for you and better for you."

They're trying to communicate this, first, by releasing a series of Web videos that speak to young people. The first two are amazing.

There's one for the ladies:

And one for the gentlemen:

Hoo boy. Did you watch them? OK, here's what happened: In the first, a young woman visits her gynecologist. Once she's on the chair and ready to see the doctor, a MONSTROUS clown version of Uncle Sam appears wielding a speculum, menacingly. In the second, a young man visiting his doctor for a checkup is told to pull his pants down. The same America death clown appears, straps on his gloves, and prepares for a prostate examination. The message in each is the same: "Don't let government play doctor. Opt out of Obamacare." Both clips are terrifying, which in a way is the goal. But they're not "terrifying" in the "oh my god I am NEVER enrolling in Obamacare, I'm so scared!" sense. It's more "Ha ha this is insane, I am going to pitch an editor to let me make fun of this on the Internet" terrifying.

These ads, like many anti-Obamacare initiatives, attempt to treat "Obamacare" as one healthcare option among a plethora of alternatives. Don't choose the one where the government monster-clown attacks your private parts; get the, uhh, other healthcare thing, where that doesn't happen! The "other healthcare thing," in this case, would be paying out of pocket for all healthcare expenses. Here's what "Obamacare" would really be like in the scenarios posited by these ads: The young people go to visit their doctors, have the doctors take care of their medical needs, and then the expenses would be covered by one of the subsidized health insurance plans that these people have purchased on exchanges.

But dumb Web videos aren't the only youthful tricks Generation Opportunity has going for it. The college kids like parties, no? Then parties they shall provide:

Generation Opportunity intends to host events at college football tailgate parties festivals, where “brand ambassadors” (read: hot young people) will pass out beer koozies that read, “opt out,” pizza and literature about the health care law. Some events may have impromptu dance parties with DJ’s, complete with games of Cornhole and competitions for prizes, organizers said.

The contrast between this tween's-birthday-party marketing approach and what this group, and its backers, are actually trying to accomplish, is where "terrifying" genuinely seems the apt term. Another would be "extraordinarily cynical." As a thought experiment, let's come up with a marketing approach for Generation Opportunity if it was trying to be honest: Come and enjoy pizza and cornhole and cool DJs as we try to convince you not to purchase health insurance, for the express purpose of disrupting the risk pool and fomenting a death spiral within insurance markets that crescendoes into a national medical crisis prompting the emergency repeal of the Affordable Care Act."