The radical constitutional change everyone missed

For first time in decades, both war and the Fed have become part of politics again. Is the Cold War finally over? 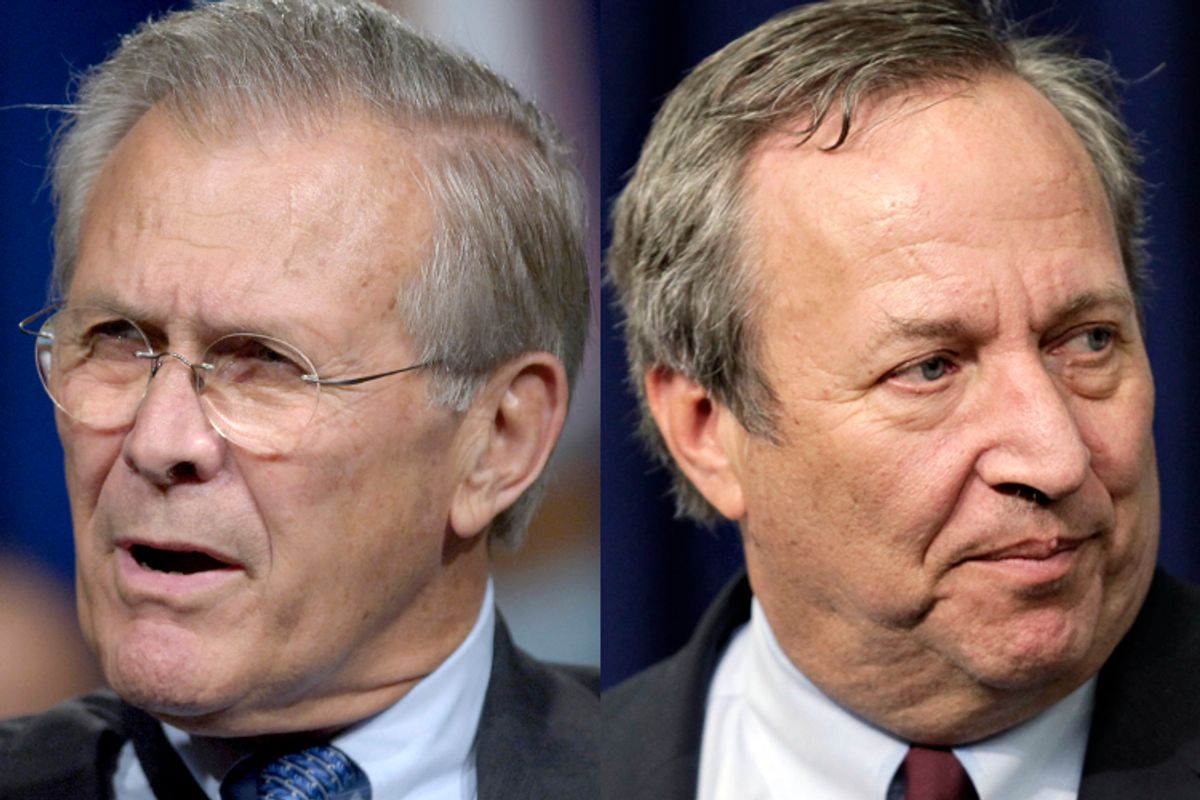 In early September, two shocking events changed politics in Washington, possibly forever. Congress effectively voted down a war in Syria, stopping a president from launching missile strikes before they occurred, rather than whining about military action after the fact. And the Senate blocked Larry Summers, a likely nominee for the Federal Reserve, the most inviolate of independent agencies -- the vaunted "temple" of high finance that has been, according to William Greider, immune to traditional politics.

Though seemingly unconnected, both events broke sacred barriers in American politics. The war machine failed to promote war. And the scions of high finance failed to promote their champion. The deeper you go, the stranger it looks. Saudi Arabia and its pet neoconservatives, a powerful network in Washington that never, ever loses, was soundly thrashed in Congress. Robert Rubin and Alan Greenspan, as powerful a duo as have ever strode the halls of the Treasury or the Federal Reserve, were blocked by a finance-loving political entity: the U.S. Senate, and of all committees, the Banking Committee of the Senate itself. Other sacred institutions, such as the National Security Agency, food stamps, the war on drugs, the Voting Rights Act, and even the imperial presidency itself, are under assault.

What seems to be happening is, for lack of a better way to put it, a very delayed end of the politics of the Cold War, and a return to pre-Cold War politics. If you think about the Cold War as a fight against the Soviet Union, then this sounds absurd. The USSR fell in 1991. But the Cold War wasn't just a fight with the Soviets, it was a specific coalition offering carrots and sticks for an international purpose against Communism. The rationale for that coalition is gone, and the institutions sustained by that coalition are in retreat.

In the Cold War coalition, the sticks were the national security apparatus, the military abroad, the war on drugs, and J. Edgar Hoover's surveillance and prison state domestically. The carrots were a safety net, unions and high wages, an equitable housing and financial system, increasing civil rights for African-Americans, and an inexpensive public education apparatus. Spheres like the Federal Reserve, the NSA, and American military adventurism abroad were held to be beyond politics, outside the realm of the public sphere. Only consensus centrists operated there, or marginalized cranks. There were exceptions, most notably opposition to the war in Vietnam and the associated activities such as the Church Commission, but these were anomalies. Once the draft went away, and the news media lost interest in the CIA (as historian Kathryn S. Olmsted makes clear in her excellent book "Challenging the Secret Government"), the Cold War quickly reestablished itself.

The fall of the Berlin Wall and the Soviet Union did not end the Cold War coalition, it transmogrified it. The national security apparatus stuck around. NATO didn't disappear, even though the supposed rationale for it did. And as historian Athan Theoharis has explained, the War on Terror was built on top of the institutions of the Cold War. For example, the NSA was created in 1952 to crack Soviet codes and spy on Soviet telecommunications systems. It morphed into spying on global communications seamlessly. The post 9/11 invasions of Afghanistan and Iraq were simply the latest American forays into Middle East geopolitics; America basically created the kingdom of Saudi Arabia, and knocked off the Iranian president in the 1950s.

The economics of the Cold War stuck around, as well, though these arrangements were also transmogrified. The 1990s saw an extension of the trade agreements and economic institutions of the post-WWII era -- NAFTA was built on the General Agreement of Tariffs and Trade, and the International Monetary Fund spearheaded an attempted expansion of the American sphere of influence into East Asia, China and Russia. This was Tom Friedman's model of globalization, a Cold War without an enemy, a one world of American capitalist corporatism. In the economic sphere, the fall of the Soviet Union as an enemy meant that communism no longer challenged capitalism. Global capitalism as a monopoly ideology soon chucked unions to the side, and then the strict financial regulation that had kept the Cold War peace. Cold War outposts like Greece, which were coddled with foreign support to keep them out of the Soviet sphere, were finally being thrown overboard in this brutal new world.

In 2013, the institutions of the Cold War still exist, but the coalition behind them is showing signs of serious wear and tear. Americans no longer support war reflexively, and no longer wish to pay for a $50 billion spying apparatus to keep them safe from Communism-anarchism-terrorism. The Federal Reserve, with its massive bailouts, is now just part of the regular tussle of politics. Larry Summers was blocked, but even Ben Bernanke had a rough nomination in 2010, getting 30 "no" votes in the Senate, the most ever for a Fed chair. Prison reform is on the agenda, and drug sentences are being reduced -- marijuana will soon be legal. The social safety net, unions, food stamps and the middle class -- all signature accomplishments of the Cold War era -- are also on their way out as new Jim Crow voting restrictions emerge.

This is not a comfortable world, for either traditional liberals or conservatives, bankers or borrowers. What is debatable in the realm of politics is expanding dramatically, from central banking to the possible end of food stamps and the middle class to whether there is any real difference between so-called private entity Google and its public brother, the NSA. The upside of a post-Cold War politics is the potential for less global superpower interference in local conflicts, fewer prisoners, debate over core questions of finance, and less surveillance. The downside is more economic instability, regional warfare, social unrest and inequality. The challenge in this post-Cold War and post-War on Terror era, for all Americans, is how to re-create a political coalition that ensures some level of social equity and military stability, without an existential enemy to unify us in getting there.