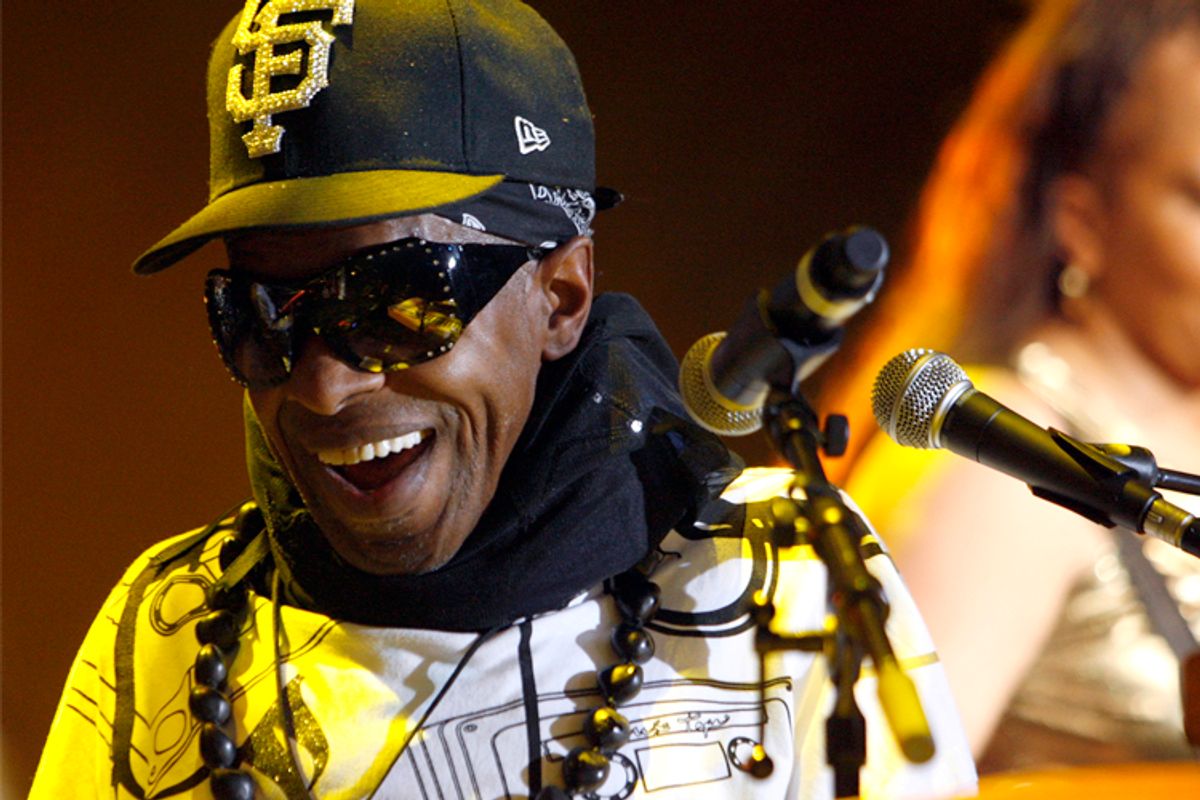 Following Miley Cyrus’ disastrous performance at the VMAs, several articles have criticized her use of black women as props. She is not the first artist to “accessorize” with members of a certain group. In 2005, Margaret Cho labeled Gwen Stefani’s use of Harajuku Girls in her videos and performances as a minstrel show. Apparently neither Cyrus nor Stefani saw a problem with objectifying these women and putting their bodies on display for public consumption, or with the way their acts set up an uneven power dynamic between the more privileged person in the spotlight and the often marginalized group in the background.

There is another artist perpetuating this disturbing trend. No, it’s not another blond, pop princess — it’s Sly Stone. For the millennials who don’t know about his band, Sly and the Family Stone pioneered funk music in the late 1960s and 1970s. They were hugely successful with a soul, funk, pop and psychedelia-infused sound that captivated black and white audiences alike. By the mid-1970s, drugs and infighting led to the demise of the band.

In a recent interview with the Guardian, Sly Stone, 70, revealed that he is making a comeback with a new band — made up of albino musicians (albinism is a genetic condition that causes a lack of pigment in the hair, skin and eyes). It’s no surprise that he would pick such an eclectic band since Sly and the Family Stone was the first American band to be multiracial and multigendered. However, his reason for wanting an all-albino band is odd and objectifying.

He explains how this new band of albino musicians will neutralize racial problems:

To me [...] albinos are the most legitimate minority group of all. All races have albinos. If we all realise that we've all got albinos in our families, it's going to take away from the ridiculous racial tension, if you're black or you're white, blah blah blah. That's why I've been trying to look for albino musicians and organise a group of people that are going to be right. That's what I've been rehearsing for. People will see us, all of us together – a real family, an albino family. People will get happy when they see that! People [...] have got to be happy for that.

As a black albino woman, I read this quote and I cringed. I want to think this is a great idea or feel flattered, but I can’t. It’s wonderful that he thinks albinos neutralize racial problems. Personally, I think we complicate racial issues, particularly if you’re an albino and a minority. He is right that albinos occur in all races, but I don’t understand why it would make people happy to see "a real, albino family.” It’s unclear whether he means “family” in the context of a band or “family” because they’ll all be albino. It’s misleading because the albino musicians that he recruits won’t necessarily be related. His word choice plays into people’s assumptions that albinos are somehow all alike.

Perhaps some would argue that it’s bettert to be visible than to be invisible. I’d rather we be visible for the right reasons and in the right contexts — not for embodying Stone’s vision of a racial utopia. His views are dangerous and they don’t help an already marginalized community. It’s bad enough that albinos are negatively portrayed in movies ("Powder," "The Da Vinci Code," "The Heat," etc.), but now we're responsible for neutralizing racism? It’s not fair. It’s not even feasible, and it’s not OK to make wild assumptions about an already misunderstood identity.

Stone's efforts to put albino musicians on display sounds eerily familiar. In his book "The African American Body: A Cultural & Literary Exploration," Charles Martin explores how black albinos and black people with vitiligo were exhibited and put on display in taverns, museums and circus sideshows in the early 18th century. It's true that context matters, and Stone's band isn't a circus sideshow. But we don’t live in a vacuum — everything is political and carries some kind of historical baggage. New century, new dynamics and yet we’re subjected to similar treatment.

I hope Stone reconsiders the idea of having an all-albino band. But even if he doesn’t, I hope musicians with albinism will consider his motives. As a marginalized group, we don’t necessarily have control over how we’re defined, but we also don’t have to contribute to the misguided thinking that surrounds our identity.

Of course, I want albino musicians to prosper and show their prowess to the world. Several artists such as Brother Ali and Yellowman have blazed the trail in doing this -- they've succeeded not as "novelties," but as talents in their own right.