Don't look back -- the machines are gaining on you

A new report predicts 47 percent of U.S. jobs are at high risk from automation. If there's a race, we are losing 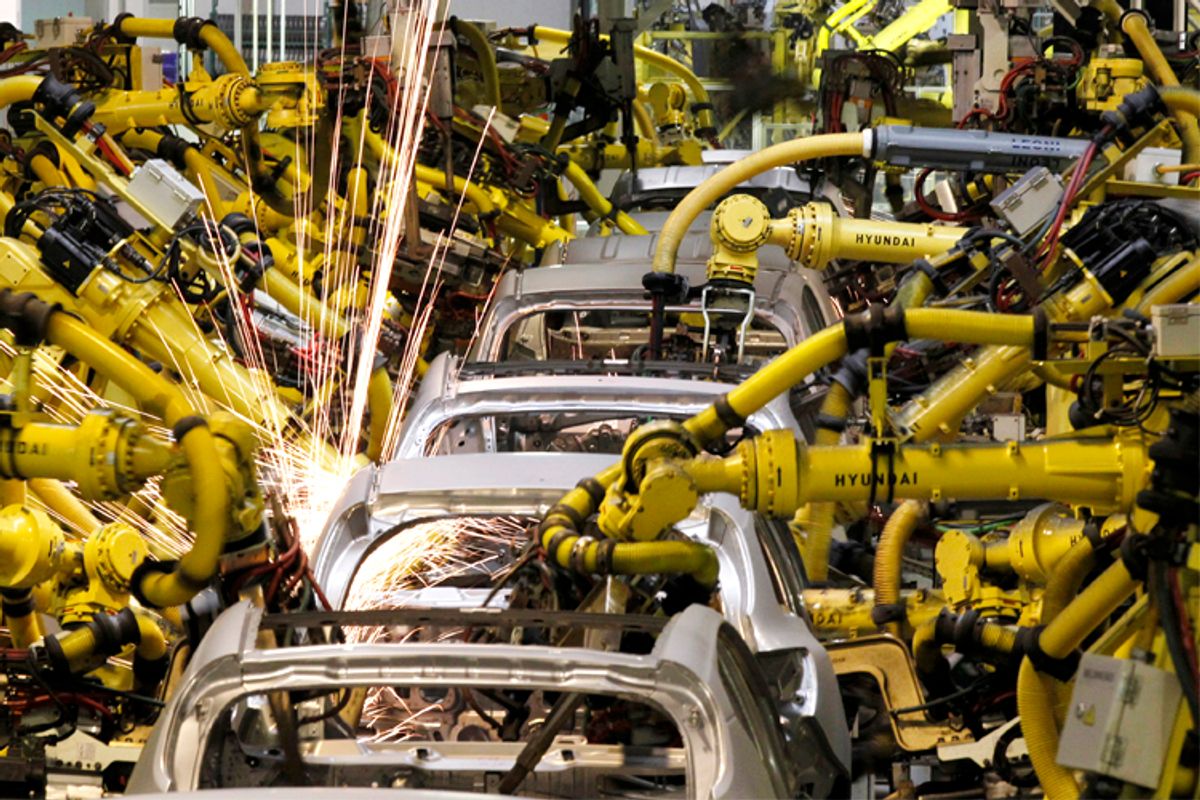 A new working paper from researchers at Oxford University poses an important question: "The Future of Employment: How Susceptible Are Jobs to Computerization?"

The answer? A lot.

"According to our estimate, 47 percent of total US employment is in the high risk category, meaning that associated occupations are potentially automatable over some unspecified number of years, perhaps a decade or two.

The authors, Carl Benedikt Frey and Michael A. Osborne, describe their study as an attempt to quantify "what recent technological progress is likely to mean for the future of employment." Advances in machine learning, they believe, including, but not limited to, improvements in pattern recognition derived from crunching "big data," will vastly increase the number of clerical and administrative support jobs that can be replaced by machines. Self-driving vehicles will eviscerate employment in the transportation industry. And so on.

The authors may be exaggerating the ability of computers to successfully execute tasks requiring "subtle judgment," but there's no question: Labor market researchers have been documenting the negative impact of technology on the job market for several decades now, and the pace of technological change is still rolling right along. If the projections are correct, there are two intriguing -- and alarming -- predictions to be derived from this new study.

The first is the researchers' conclusion that according to their model, the recent labor market polarization in which jobs have clustered at the high end and low end, with the middle getting squeezed, is about to change. Low-end jobs will also be at increasing risk to automation. Only those jobs that include a high degree of creativity or "social intelligence" or other advanced skills that can resist the best efforts of current artificial intelligence will survive.

And that would be a disaster. Because it's very difficult to imagine improvements in our educational system that would create sufficient employment opportunities at the high end of the market for all the workers being displaced out of low- and middle-echelon jobs.

A closely related conclusion is that we may end up finding that John Maynard Keynes' ancient prediction -- widespread unemployment "due to our discovery of means of economizing the use of labor outrunning the pace at which we can find new uses for labor" -- is about to come true. A century's worth of mainstream economists have scoffed at the notion that technological progress will have long-term negative impacts on employment, believing, with a near-religious intensity, that the productivity gains from technologically driven economic growth will translate into new opportunities in new domains.

But that faith is now in question:

The reason why human labor has prevailed relates to its ability to adopt and acquire new skills by means of education. Yet as computerization enters more cognitive domains this will become increasingly challenging. Recent empirical findings are therefore particularly concerning. For example, Beaudry, et al. (2013) document a decline in the demand for skill over the past decade, even as the supply of workers with higher education has continued to grow. They show that high-skilled workers have moved down the occupational ladder, taking on jobs traditionally performed by low-skilled workers, pushing low-skilled workers even further down the occupational ladder and, to some extent, even out of the labor force. This raises questions about: (a) the ability of human labor to win the race against technology by means of education; and (b) the potential extent of technological unemployment, as an increasing pace of technological progress will cause higher job turnover, resulting in a higher natural rate of unemployment...

If we really are in a "Race Against the Machine," the evidence seems to be piling up that we're falling behind.