The game's critique of our consumerist, politically corrupt society is actually important -- if anyone's listening 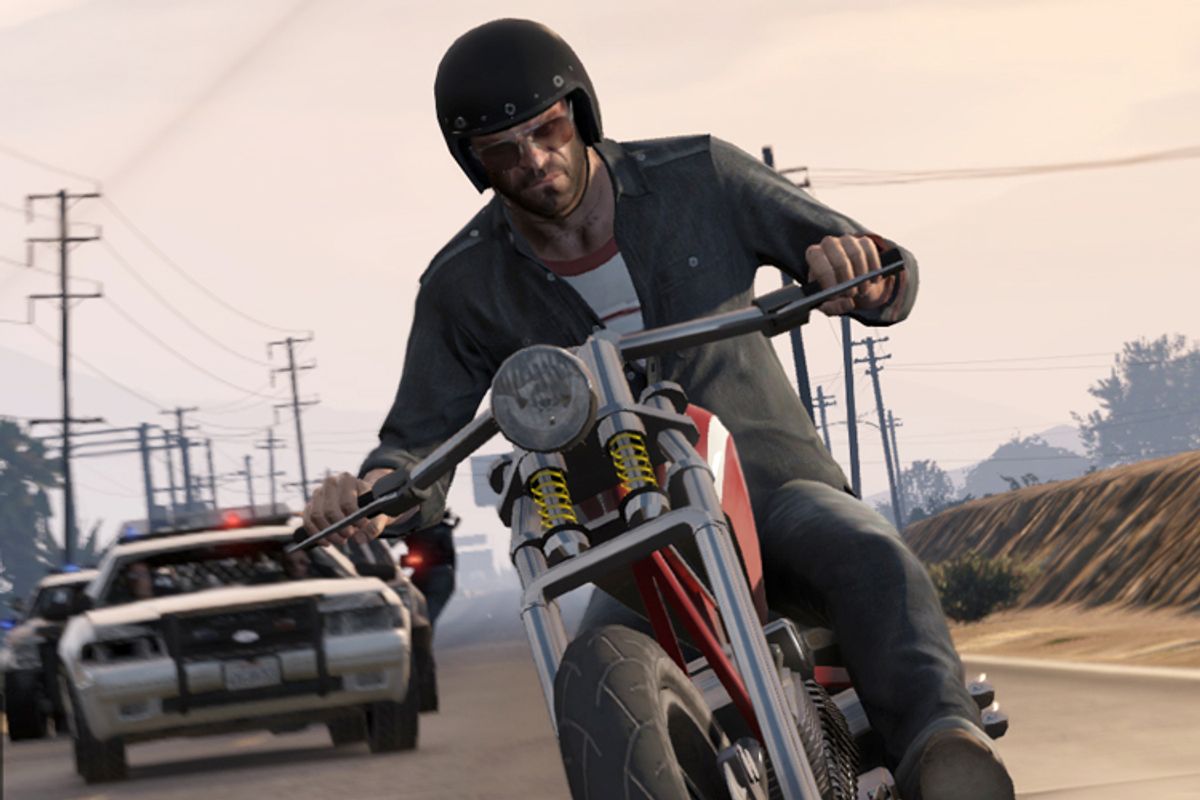 Gamers collectively paid $800 million and waited in hours-long queues this Tuesday, all to buy a video game that calls them assholes.

Not directly, of course. The "Grand Theft Auto" series is the video game equivalent of a smartass in the back of the room making wisecracks at everyone’s expense. Just like we might scowl at the smartass without trying to understand what vulnerability he might be covering up with his hostility, we focus on the crimes depicted in "GTA" without looking carefully enough at what lies just underneath the surface.

Players have been stealing cars, slaughtering police officers, moving narcotics, beating hookers and taking on organized crime syndicates in detailed, open, virtual worlds since the release of "Grand Theft Auto III" in 2001, and to the uninitiated, "Grand Theft Auto V" is merely the pinnacle of murder, theft, prostitution and drug empire simulation.

That’s where the mainstream audience and press usually leave off, and where Fox News and other conservative pundits weigh in. Even members of the video game enthusiast press feel free to write reviews of "Grand Theft Auto V" based on breezy playthroughs of one of the most content-dense games in years, or to levy criticism at the game without even having played it. Everyone assumes they have a handle on what’s going on in a "Grand Theft Auto" game. But I’d argue that mayhem and criminals are the least important part of "GTA V."

The heart of the game is in its billboards and television shows and web pages and movies and radio programs. The cultural commentary rolls out like a Bret Easton Ellis list of decadent consumer products. I can visit the website for Taco Bomb, whose American owner is launching his “Mexican” restaurant in Mexico, thereby “proving you can market anything to anyone.” I can check the value of my shares in AnimalArk, a “national chain of all-natural pet food stores, because half the world is starving but Fido only eats organic.” I can buy a boat on docktease.com where the CEO writes “I started this business in 2008 to make luxury watercraft accessible to a broader spectrum of rich people.”

The Doppler Theater shows daily times for “Sequel” on the marquee. One billboard advertises Toe Shoes so you can “run like a caveman,” while another promotes StopPayingYourMortgage.net with the tagline “The banks failed you! Time to fail them.”

A radio commercial advertises investments in correctional facilities as particularly secure, because politicians are passing laws that mete out stiff punishments for minor offenses. And on the "Republican Space Rangers" television cartoon show, the Rangers make racist cracks and celebrate fighting for the freedom to go into debt buying cheap plastic crap.

The satire is so blunt and often crude that some critics dismiss it out of hand as merely childish. The humor is unapologetically immature, but what does it say about the society that "Grand Theft Auto V" is satirizing when such crass mockery is not only entirely appropriate but sadly true if we take our blinders off?

It’s ironic that "Grand Theft Auto" games are often dismissed for their violent, sociopathic protagonists at a time when James Gandolfini and Bryan Cranston receive critical acclaim for depicting violent sociopaths. Tony Soprano chokes his nephew Christopher to death in his own blood. Walter White watches a young girl suffocate on her own vomit. Soprano murders his best friend. White blows up an old-age home to kill a rival.

The violence committed by these maniacs against characters we are meant to care about isn’t enough to make critics dismiss "The Sopranos" or "Breaking Bad." The violence in a "Grand Theft Auto" game, on the other hand, is committed against the equivalent of paper dolls, nothing more than artificial intelligence routines controlling empty avatars like marionettes. But that will probably still be enough to prevent media critics from looking at "Grand Theft Auto V’"s satire to ask honestly if the game has anything of value to say.

But one measure of the game's relevance is sheer numbers. Compare "GTA V’"s $800 million one-day profit to the record $91 million one-day North American gross for "Harry Potter and the Deathly Hallows 2." Take-Two Interactive just announced that according to company estimates "Grand Theft Auto V" has hit the $1 billion sales mark in three days, the fastest entertainment product to reach that milestone. The top three-day gross for a movie in wide release is the $207 million earned by "The Avengers." Now consider all the gamers who will create videos of their game play to share on YouTube with countless other gamers, whereas the viewers of "Harry Potter" and "The Avengers" were forbidden by law to share their experience with anyone who hadn’t paid for a seat next to them.

Now, a member of "Grand Theft Auto V’"s intended audience is 24 years old on average and male 82 percent of the time, according to Nielsen data. That’s not a demographic I normally associate with contemplative reflection on culture, so it’s tempting to question whether any of us ought to take "GTA V" seriously when the preponderance of the game’s audience will probably laugh at the surface-level, frat boy humor in"GTA V’"s social commentary and leave it at that.

On the other hand, plenty of core gamers are in their mid-30s and appreciate the potential sophistication of modern video games. They’re the audience that enjoys "The Daily Show," "The Colbert Report" and "Real Time with Bill Maher," the audience that likes to see the hypocrisies and lunacy of American society paraded on national television.

It’s always a relief to hear someone pull back the veil and say out loud that we’re in economic, political and cultural crisis. Things are not okay, and we know it. "Grand Theft Auto V" hands us a concentrated helping of that perspective, set in a virtual world whose nightmarish violence isn’t even that fantastical anymore with a mass shooting on the news every other week.

I would like to think that when the Baby Boomers have finally passed the torch of leadership in politics, business, art and entertainment to a generation that includes the elder statesmen of the video game culture, people who grew up with video games and are now in or approaching their 40s, that a game like "Grand Theft Auto V" will be met more seriously and deconstructed elsewhere than in tiny circles of video game academics, as is currently the case.

For now, the satire of "Grand Theft Auto V" is made all the richer by the obliviousness of the majority of its audience. We can count on most of the people who play "GTA V" to fail to realize how thoroughly they’re being dismissed as empty and extraneous extensions of vacuous consumer culture or, even if they do realize, count on their failing to care -- which makes the game’s argument more pointedly than any fake website, billboard or television program ever could.