Both men were given security clearance by same private contract firm, but that's no grounds for false equivalence 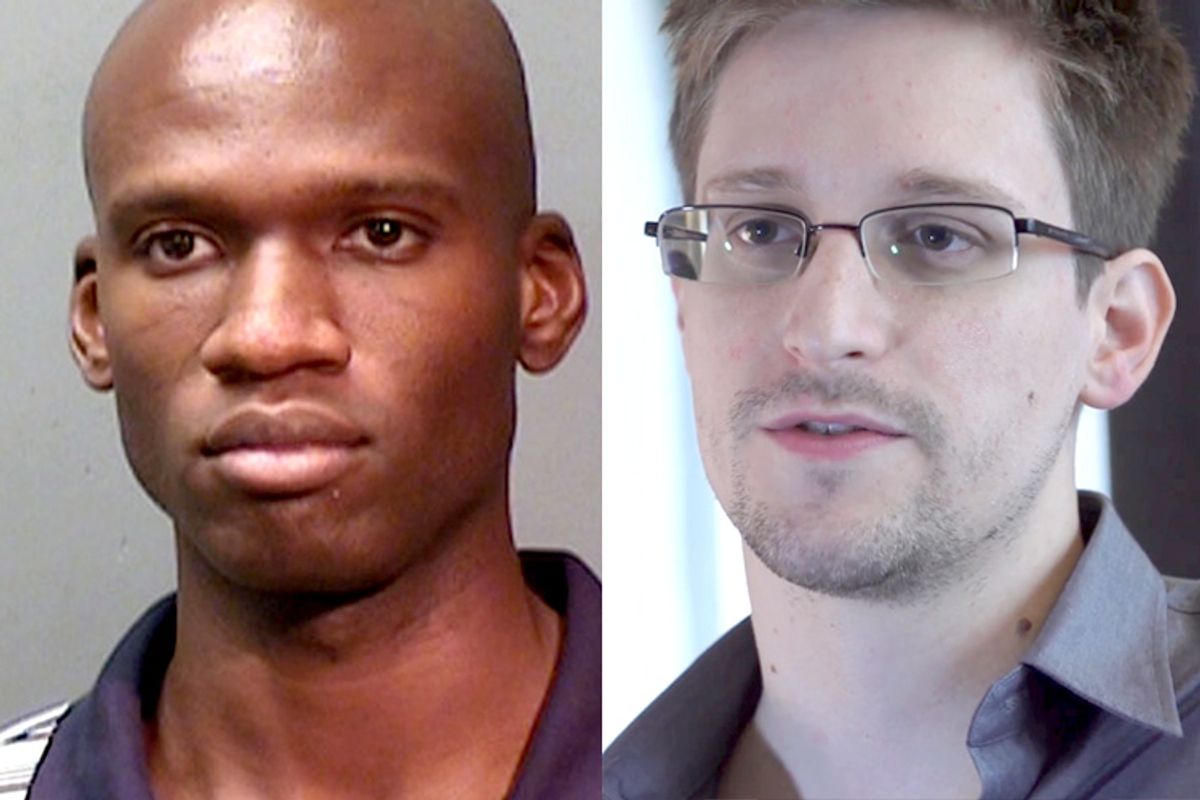 The point stressed is that the private firm USIS -- the largest private provider of government background checks, which took over from a government-run operation in the 1990s -- is negligent enough to give clearance to both whistle-blowers and mass shooters. It seems to me entirely possible, however, to apply skepticism to the private contractor without drawing the rhetorically violent false equivalence between Snowden (of clean record and ethical intent) and Alexis (of record marked by mental health struggles and criminal incidents).

USIS employs 7,000 people and carries out background checks for 45 percent of all the government's Office of Personnel Management (OPM) background checks. As such, it's of little surprise that both the files of Snowden, a former NSA contract worker, and Alexis, a civilian contract worker at the Navy Yard, passed through USIS's vetting system. And, by government standards Snowden's clearance can -- post hoc -- be read as equally if not more dangerous to its own interests as Alexis'. Indeed, the U.S. government is no doubt reeling from a greater international outcry in the wake of revelations about NSA data hoarding and spycraft than it is from news of yet another tragic shooting. The latter incident, of course, has already fallen along the similar politicking fault lines over gun control and mental healthcare in this country. Snowden's revelations are not so easily handled by the government P.R. mill.

Yet in drawing a false equivalence between Snowden and Alexis in regards to security clearances, the U.S. media this week have pulled a cheap, if perhaps unwitting rhetorical trick, which paints the whistle-blower in a grisly light. Snowden had an entirely clean record when his background check was carried out. Indeed, for those who share my opinion that Snowden's leaks were a bold public service (even James Clapper said they prompted "important debate") the only thing that could keep such whistle-blowers out of government agencies and contracted positions would be if USIS vetted for good conscience. One hopes it does not. Unfortunately, self-selection and obedience seems to do USIS's job for it on that front -- there are too few Edward Snowdens.

Alexis' case is different entirely. The gunman, whose case was vetted by USIS in 2007, had been arrested three years prior in Seattle after an incident in which he shot out the tires of a car, according to the Seattle Police Department. The police report, noted by the AP, strongly suggests a level of mental perturbation and rage issues:

Following his [2004] arrest, Alexis told detectives he perceived he had been “mocked” by construction workers the morning of the incident and said they had “disrespected him.” Alexis also claimed he had an anger-fueled “blackout,” and could not remember firing his gun at the victims’ vehicle until an hour after the incident.

In 2010, Alexis was arrested again for reportedly firing a bullet accidentally into his neighbor's apartment. No charges were filed and this incident post-dated his USIS clearance by three years.

Meanwhile, commentators picking up on comments from journalist Glenn Greenwald about the timeline of his contact with Snowden have noted that the whistle-blower was in contact with journalists before he began working at his most recent government contracted job for Booz Allen Hamilton in February. But, it would have taken some of the most intensive government spycraft (the likes of which Snowden has shed light on) to vet Snowden from his Booz Allen position based on prior contact with journalists, which was carefully and covertly carried out by the whistle-blower and his media contacts (as a number of detailed profiles on the leaker, Greenwald and Poitras have illustrated).

It's a fair point to stress that a profit-making contractor firm failed to keep appropriate tabs on the security clearance status of a man suffering from mental health problems, who owned guns legally and had illegally fired them in the past. Indeed, a healthy dose of speculation should be applied in investigating whether firms like USIS cut corners in the pursuit of greater profits. That is a story in itself. But such an investigation should not draw a false equivalence between Snowden the whistle-blower and Alexis the gunman.