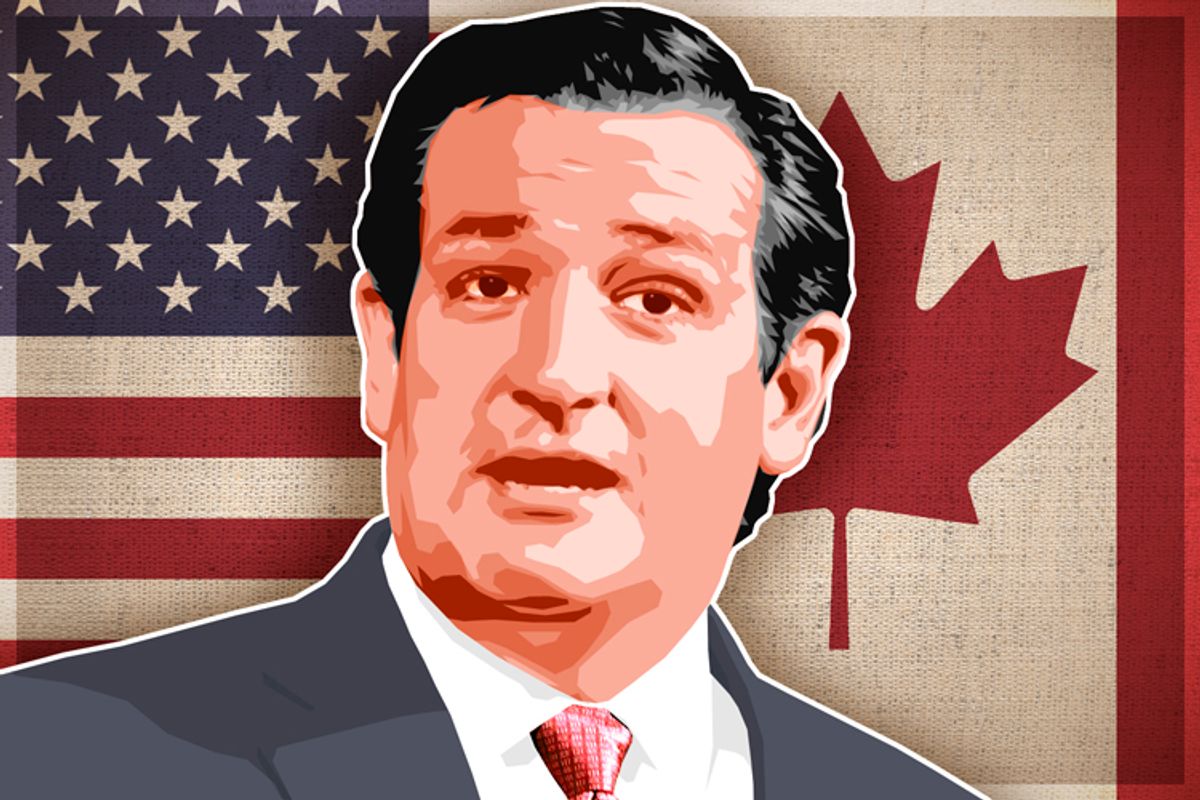 Believe it or not, it looks like Sen. Ted Cruz is still a Canadian citizen. Although it has now been over a month since he promised to renounce his Canadian citizenship – which he obtained by virtue of his birth in Calgary, Alberta – there has been no indication (whether press release, statement or otherwise) announcing that he has followed through on the commitment.

Cruz’s website is silent on the subject, his official biography doesn’t even mention the word "Canada," and I received no response to repeated email requests for additional information. My telephone inquiry to Cruz’s press office produced only an email that repeated his statement of future intention, as first issued on Aug. 19: “I will renounce any Canadian citizenship. Nothing against Canada, but I’m an American citizen by birth and as a U.S. senator, I believe I should be only an American.”

While Cruz’s sentiment was surely sincere at the time, it does appear that he is still holding on to both his Canadian citizenship and his Senate seat. I can’t really fault him for any ambivalence. I am a dual U.S./Canadian citizen myself, and I intend to stay that way, but, then again, I am not planning to run for president. Cruz, on the other hand, has already started courting conservatives in Iowa. So the question must be asked: What is keeping Ted Cruz from finally renouncing his Canadian citizenship?

Perhaps Cruz simply hasn’t gotten around to it. In fairness, the Canadian government requires more than a simple shout-out before canceling somebody’s citizenship. The aspiring ex-Canadian has to pay a fee of $100 and submit an official “Application to Renounce Canadian Citizenship,” which could be a bother for someone with a busy schedule of Tea Party meetings and lectures for the Heritage Foundation. On the other hand, the renunciation form is pretty simple. There are only 12 questions on the application, and most of them request basic information such as name, address and date of birth, all of which could be handled by a staffer.

There is one section, however, that could cause Cruz some trouble, and perhaps that is the reason for his delay. Question 5 instructs the applicant to “attach proof” that he is (or will become) a citizen of a country other than Canada. That may seem like it is none of Canada’s business, but in fact the requirement follows from important principles of international law – including the International Covenant on Civil and Political Rights – which call upon governments to protect individuals from becoming stateless. Of course, Canada’s requirement of proof was not established with U.S. senators in mind, but it does reflect an admirable intention to ensure that all individuals have national rights in at least one country. And in any event, it is up to Canada to decide how and in what manner its citizenship may be annulled – the U.S. has similar rules – and Cruz has no choice but to follow the necessary protocol.

In order to fulfill his promise to the voters, Cruz must therefore submit proof that he is a U.S. citizen, which will be trickier for him than for most people. Cruz has thus far released only his Canadian birth certificate, which confirms that he was born in Calgary, Alberta, in 1970, and additionally states that his mother was born in Wilmington, Dela. The second part is crucial – Cruz’s only claim to U.S. citizenship through his mother – but it is also hearsay. The birth certificate is primary evidence of Cruz’s own birth, but the entry about his mother merely records her assertion to the Alberta Division of Vital Statistics. Even though I don't personally dispute what he says, “My mother said so” is not what is usually meant by “proof.”

How, then, can Ted Cruz prove his U.S. citizenship to the satisfaction of the Canadian authorities? He could submit his passport, or perhaps the document called a Consular Certificate of Birth Abroad (if his parents obtained one), but those would have the same hearsay problems as his birth certificate. The only sure-fire evidence, therefore, would be his mother’s birth certificate, presumably issued when she was born in Delaware.

But even that presents a problem. Only one of Ted’s parents was a citizen when he was born (his father is a Cuban émigré who did not take U.S. citizenship until 2005), and he therefore falls under a special section of the Immigration and Nationality Act that applies to “Birth Abroad to One Citizen and One Alien Parent.” Under that provision, Cruz only qualifies for American citizenship if his mother was “physically present” in the United States for 10 years prior to his birth, five of which had to be after she reached the age of 14. The only definitive way to prove Eleanor Cruz’s 10 years of physical presence would be with documents such as leases, school registration, utility bills or tax records.

Of course, we don’t know how rigorous the Canadians are about evidence of citizenship, but we do know that they will not be willing simply to take Ted’s word for it. Their form is very specific about requiring documentary proof, and that might be hard for Ted to come by. Could that be the reason for Cruz’s delayed renunciation? It would be pretty embarrassing to have his Application to Renounce Canadian Citizenship denied on a technicality.

One thing we do know about Ted Cruz is that he is adamant about defunding Obamacare, which he has pursued with a manic fury. The result could be the loss of medical insurance for over 10 million Americans, but I guess that won’t bother Ted. After all, he is entitled to free medical care as long as he remains a Canadian citizen.