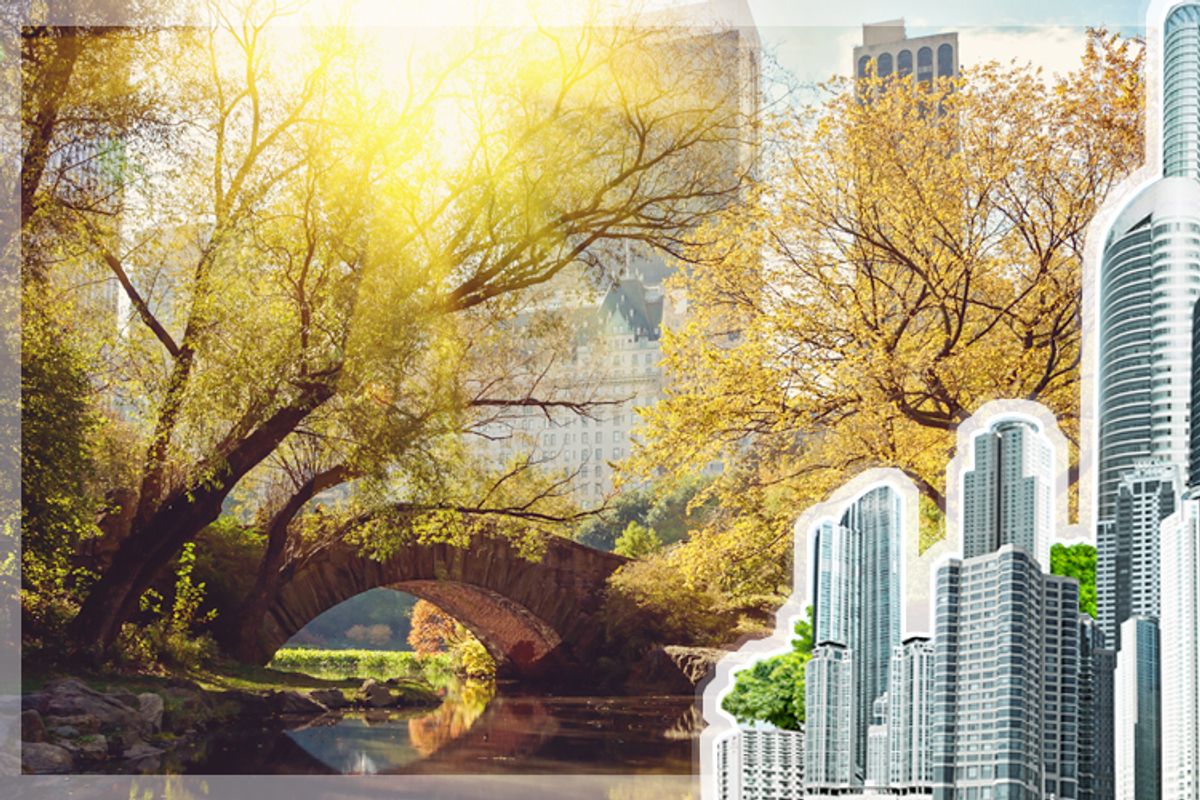 Last year, a group of Edinburgh architecture researchers asked a dozen students to take a walk. They began on a tree-lined shopping drag, turned along the tranquil northern edge of the Meadows, one of the city's larger parks, and wound up in a busy commercial district some half-hour later. The pastoral section of an otherwise urban jaunt, the researchers found, induced a significant increase in meditative thinking.

This may not strike you as a novel discovery. Thanks to Henry Thoreau's trip to Walden Pond, Teddy Roosevelt's sojourn in the Badlands, and America’s other legends of retreat, the idea that nature has restorative powers is deeply embedded in our culture. Science is in support: A raft of studies credit bucolic settings with reducing aggression, alleviating depression, and improving mental function.

This is not quite the same old story, though. The results of the Edinburgh study were obtained through mobile electroencephalography (EEG) technology. Participants took their 25-minute walk with a web of electrodes glued to their scalps and a laptop computer in a backpack to record their neural impressions, step by step. When the paper says that the transition to North Meadow Lane was marked by "reductions in arousal, frustration and engagement, and an increase in meditation," it is not referring to participants’ reactions on a lab-administered survey or test, but to fluctuations in brain activity recorded in situ.

It is, the researchers say, one of the first -- if not the first -- experiments to record live neural impressions of subjects moving through a city, and it has provocative implications for architecture and urban design. For centuries, philosophers and poets have struggled to define the character of place; to explain why some streets make people feel cozy and some lonely, some squares are friendly and some harsh; to understand what the French sociologist Guy Debord called "the evident division of a city into zones of distinct psychic atmospheres." Mobile neuroscience is about to transcribe our sense of spatial perception, breaking the mystery of urban life into neatly measured surges of cerebral activity.

Electroencephalography tracks voltage flows within the brain. It has been widely used in cognitive science experiments and to diagnose epilepsy and other neural disorders. Though EEG lacks the spatial precision of magnetic resonance imagining (MRI), it has a few advantages over more sophisticated methods of brain analysis. It's relatively cheap, requires little heavy equipment, and is very forgiving of subject movement. All these make EEG a good technology for measuring brains on the go.

Still, mobile EEGs are relatively new, and their scientific reliability was only established in September 2012, when a paper in the journal Psychophysiology, "How about taking a low-cost, small and wireless EEG for walk?" confirmed that solid data could be obtained from such trials.

In the Edinburgh study, "The Urban Brain: Analyzing Outdoor Physical Activity With Mobile EEG," which was published in March, the team used a wireless EEG headset made by the Australian electronics company Emotiv. It is essentially a commercial device, rather than a piece of medical equipment, which entails some caveats that might not sit well with neuroscientists. The researchers had to put faith in Emotiv's algorithm that "translates" raw electric brain data from 14 sensors into user-friendly metrics of frustration, engagement, excitement and meditation.

The results from downtown Edinburgh were clear enough. North Meadow Walk induced a meditative state. Excitement remained high in both the first and second legs of the journey, where social interaction was frequent. Moving from a busy urban environment to a park produced a greater mental change than leaving the park, indicating lingering mental benefits of natural surroundings.

But then the landscape variations were not particularly subtle. Evaluating the emotional impact of more nuanced urban variables, like traffic or light quality, would be more difficult. Can we isolate a subject’s reaction to a bench, a factory building or a tram passing by?

"Some scientists I've spoken to since have come back and said, 'You're lucky to get a good result, because we couldn't,'" explains Richard Coyne, a professor of architecture at the University of Edinburgh and one of the paper’s four authors. "The frequencies of nerve impulses can be generated by all sorts of things. Blinking. Squinting. Moving your head. They can be influenced by muscular movements."

Whence a buzz of excitement? "It could be a thought, a poster, someone who's just walked past you," Coyne says. "That's why it's important to do multiple tests with multiple people." Layering dozens of brain impressions of Edinburgh created a chorus of neurological voices, smoothing out the personal highs and lows of a walk around town.

Coyne compared the EEG work to that of the Situationists, the French philosophical movement whose leader, Guy Debord, was one of the first to argue that the emotional quality of urban space was worthy of study. Debord developed a theory of “psychogeography” in a 1955 essay, "Introduction to a critique of urban geography":

“People are quite aware that some neighborhoods are gloomy and others pleasant. But they generally simply assume that elegant streets cause a feeling of satisfaction and that poor streets are depressing, and let it go at that. In fact, the variety of possible combinations of ambiences, analogous to the blending of pure chemicals in an infinite number of mixtures, gives rise to feelings as differentiated and complex as any other form of spectacle can evoke.”

Debord and his peers, however, had no access to sophisticated neural imaging technology. Rather, he wrote, the research required "bold hypotheses that must be constantly corrected in light of experience, by critique and self-critique."

In the intervening years, this "soft" analysis of the city has become institutionalized. (It has long been considered proper to evaluate architecture by emotional response.) Kevin Lynch's "mental maps," personal interpretations of urban space, are valuable cartographic documents that have spawned a whole line of research. The entire discipline of environmental psychology exists to evaluate how people perceive and interact with their surroundings.

Architects, too, have been trying to integrate neuroscience into their work for years. The Academy of Neuroscience for Architecture, for example, a California-based group of academics and practitioners, advocates designing classrooms to support learning, hospital rooms to expedite recovery, and offices to encourage productivity, using cutting-edge brain research. Should the windows be smaller? The ceilings higher? The hallways narrower?

Earlier this month, Coyne and his colleagues from the “urban brain” experiment won a $2 million grant for a three-year research project to study how the elderly interact with cities. For the project, “Mobility, Mood, and Place,” led by Catharine Ward Thompson of the University of Edinburgh, over 80 subjects will undergo in situ EEG tests. The hope is that the findings will illuminate the unique urban needs of senior citizens, and inform future design projects for their benefit. Whether architects are interested in adapting their design sensibility to the public’s neuronal impulses remains to be seen.

The rest of us will get our hands on mobile EEGs soon enough. Emotiv obliterated its most recent Kickstarter goal, raising over $1.6 million in 45 days to fund a sleek, wireless headset that will transmit simplified EEG data directly to your smartphone.

The resulting boom in armchair neurological study will be interesting for a thousand reasons, not least for its significance to the urban environment. Will buyers start wearing EEG headsets around town like Google Glass, blogging about how their brain handles driving on the 10 vs. Wilshire Boulevard, or shopping at the Pike Place market vs. Albertsons?

For fun, we can try practicing Debord’s concept of drift, or dérive, which is like stream-of-consciousness for pedestrians. “Drop your usual motives for movement and action, and succumb to the attractions of the terrain,” he advises.

With an EEG strapped to your skull, you’ll be a step closer to identifying those “attractions of the terrain” that make city life so stimulating and enjoyable.