The Emmys played it safe

Ostensible surprises aside, the show respected its elders and didn't break too many boundaries 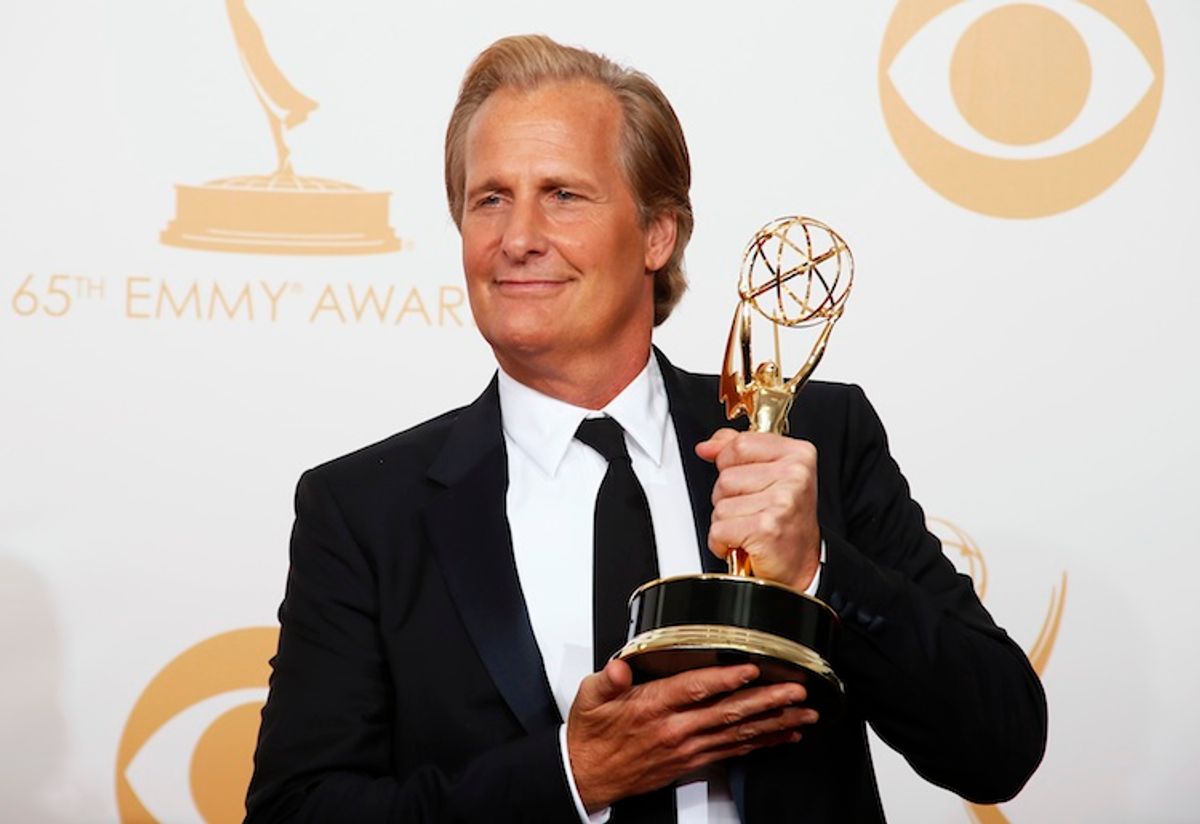 I did not watch the 65th Annual Emmy Awards in real time. If we do indeed live in the Golden Age of Television, that certainly has much to do with our ability to fast-forward through commercials about Samsung SMART TVs, luxury Audis, and CBS' Monday night lineup. I set the DVR, took a nap, woke up about 10:30 and punched in about two-and-a-half hours into the ceremony.

An hour later, while I was still reeling from the shocking third consecutive win for Jim Parsons, I received a brief email from my editor who had just sat through the broadcast in its entirety. Among a handful of other ideas, she rather cryptically suggested that I might want to address the "Newsroom upset" in my post-Emmy post for this morning. Spoiler-wary and unwilling to zip ahead to the end, I sat baffled for the rest of the broadcast wondering what that phrase could possibly mean. Did the academy decide, at the last minute, to add a new awards category, Outstanding Revisionist News Dramedy, in which Aaron Sorkin's baby was sure to triumph? Did Olivia Munn as Newsnight correspondent Sloan Sabbith somehow trump the Mother of Dragons and the Dowager Countess of Granthem to win best supporting actress in a drama? Considering the wildly dissenting opinions regarding "The Newsroom" and its quality -- even among the writers on this site -- I had to wonder what would constitute an upset. More on that later.

By tomorrow afternoon, everything that has already been written about this year's Emmy Awards -- including that which you are reading at this very moment -- will have evaporated into the ether that is the previous day's news cycle. Already, sleep-deprived publicists are swapping the words "Emmy-nominated" for "Emmy-winning" where appropriate and all the predictions and handicaps posted last week are meaningless to anyone but entertainment journalists willing to publicly pat themselves on the back. The 65th Annual Emmy Awards are now most definitely history and hardly the kind of indelible, world-altering history that Don Cheadle and Carrie Underwood paid tribute to during the more somber first half of the broadcast.

That said, the show did have its mildly memorable moments and there was some takeaway. Among the former: Merritt Wever proved -- with her speech, not with her reportedly praise-worthy performance on "Nurse Jackie" -- that the best way to make an impact is to humbly quit while ahead. Julia Louis-Dreyfus and Tony Hale demonstrated why more people should be watching "Veep." Among the latter: While rousing in its normal context, the "Modern Family" theme song is perhaps the worst, most harrowing music to get played off to while delivering too long of a speech. Also, Jon Hamm is sure to nail the lead in whatever van Gogh biopic HBO or AMC is prepping. Ditto for Melissa Leo as Stevie Nicks. Finally, when combined into one single routine, "So You Think You Can Dance" and "Dancing With the Stars" still comprise just a hair too much dancing.

My editor also suggested that I discuss the show's "racial and sexuality politics." As a whole, the telecast felt safely and thankfully apolitical to me. As far as race goes, Arsenio Hall looked good, got laughs, and greatly raised my expectations for his impending return to television. (I cannot say the same for Shemar Moore despite the fact that, as far as I know, he is still on television.) Diahann Carroll's appearance was a delight and not just because it reminded us of her historic significance as the first-ever African-American Emmy nominee, but because her wit and feistiness counterbalanced fellow presenter Kerry Washington's stiffness. (Is it me, or does Washington often evoke Tyler Perry-as-Madea's good morn-ting extreme properness when making a public appearance?)

Prior to dedicating the song "Home Again" to the memory of Liberace, Elton John touched ever-so-lightly on the musician's lifestyle, "which due to the tenor of the times had to be concealed." Um ... like now? Whether the parties are openly gay, as in the case of Neil Patrick Harris versus Jane Lynch or just playing gay on HBO like Matt Damon and Michael Douglas, the only jokes that fly on network are still -- apparently -- limited to wink-wink innuendo.

Ellen Burstyn landed a sharp dig at Hollywood ageism. Jeff Daniels mocked his own advancing years while receiving a best actor award for his role on "The Newsroom." But, otherwise, a fair amount of respect and deference was shown to past Golden Ages of television. Douglas won. Carroll presented. Robin Williams paid tribute to Jonathan Winters. Jean Stapleton was celebrated. And the Academy rectified a grievous oversight by finally giving Bob Newhart his first Emmy.

Jeff Daniels' win for lead actor in a drama was the upset, by the way. He beat out a handful of more high-profile nominees including Bryan Cranston and Jon Hamm, but did so with such low-key grace and humility that I almost missed it. "The Newsroom" was shut out of all other major categories, a fact that is probably pretty upsetting if you happen to be Aaron Sorkin. If you're Vince Gilligan, last night was a blast. Speaking of which, which do you think more people will be jabbering passionately about today: last night's Emmy Awards or the penultimate episode of "Breaking Bad"?