This handy map shows where there's arsenic in the drinking water

The toxic element is odorless and tasteless, but scientists no longer believe that trace amounts are harmless 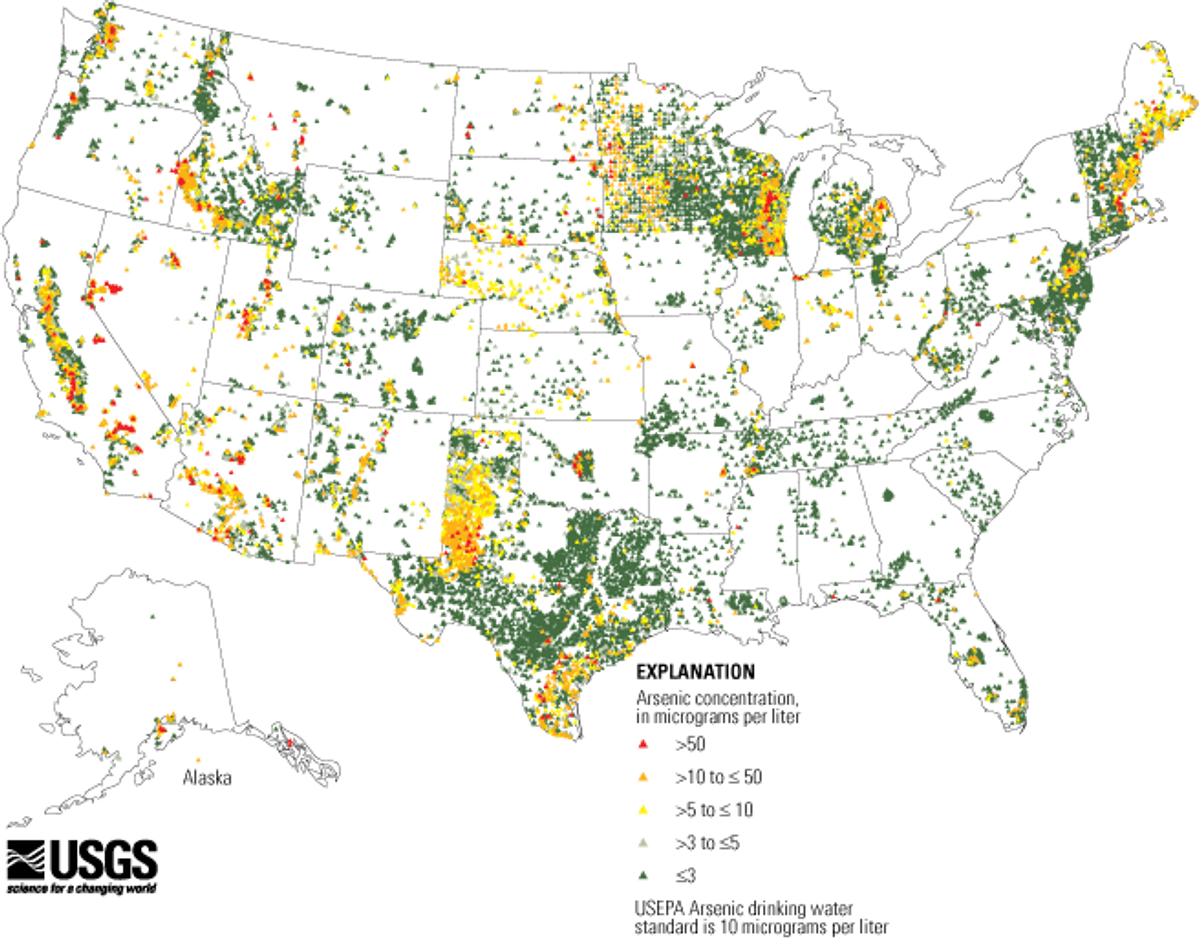 Writing in the New York Times last week, Deborah Blum reviewed recent scientific research on a startling public health threat: naturally occurring arsenic that seeps into groundwater could be poisoning those who drink it. Blum explains:

Long famed for its homicidal toxicity at high doses, a number of studies suggest that arsenic is an astonishingly versatile poison, able to do damage even at low doses. Chronic low-dose exposure has been implicated not only in respiratory problems in children and adults, but in cardiovascular disease, diabetes and cancers of the skin, bladder and lung.

The researchers first caught on to the problem in Bangladesh, where they were on the lookout for high levels of arsenic. But the more research they did, the more negative health effects they found -- even when the contamination didn't seem so bad. Scientists are now paying attention to the poison in developed countries like the U.S.:

Researchers also are taking a much closer look at drinking water, from Southwestern states like Nevada, where wells sometimes contain arsenic at more than 500 p.p.b., to the upper Midwest and New England, where a belt of arsenic-infused bedrock taints aquifers in stretches from the coast of Maine to a point midway through Massachusetts. Water in parts of the Central Valley of California, America’s breadbasket, has been found to be tainted with arsenic as well.

While municipal water suppliers are required to meet the E.P.A.’s safety standard of 10 p.p.b. for arsenic in drinking water, no such regulation exists for private wells. Nationwide, researchers say, about 13 million people get drinking water from private wells with arsenic levels above the federal standard.

Following up on that piece in Wired, Blum goes on to show in more detail where groundwater arsenic can be found. The above map, from the U.S. Geological Survey, shows its presence in parts per billion -- 10 parts per billion is the current EPA safety standard for drinking water. There are plenty of ways in which it could have gotten there, she reports. Gold and tungsten mining contributes to its presence, as do ancient marine shales such as those found in New England. Arsenic in the soil, which contaminates aquifers as rainwater drains through, is also a factor -- and also contributes to arsenic being found in rice and other crops. If nothing else, Blum found, the scientific consensus is that we need to know more about where the toxic element can be found and the harm it's potentially doing.