9 reasons to fear your steak dinner

Our favorite meats are loaded with contaminants, all so the food industry can improve its profit margins 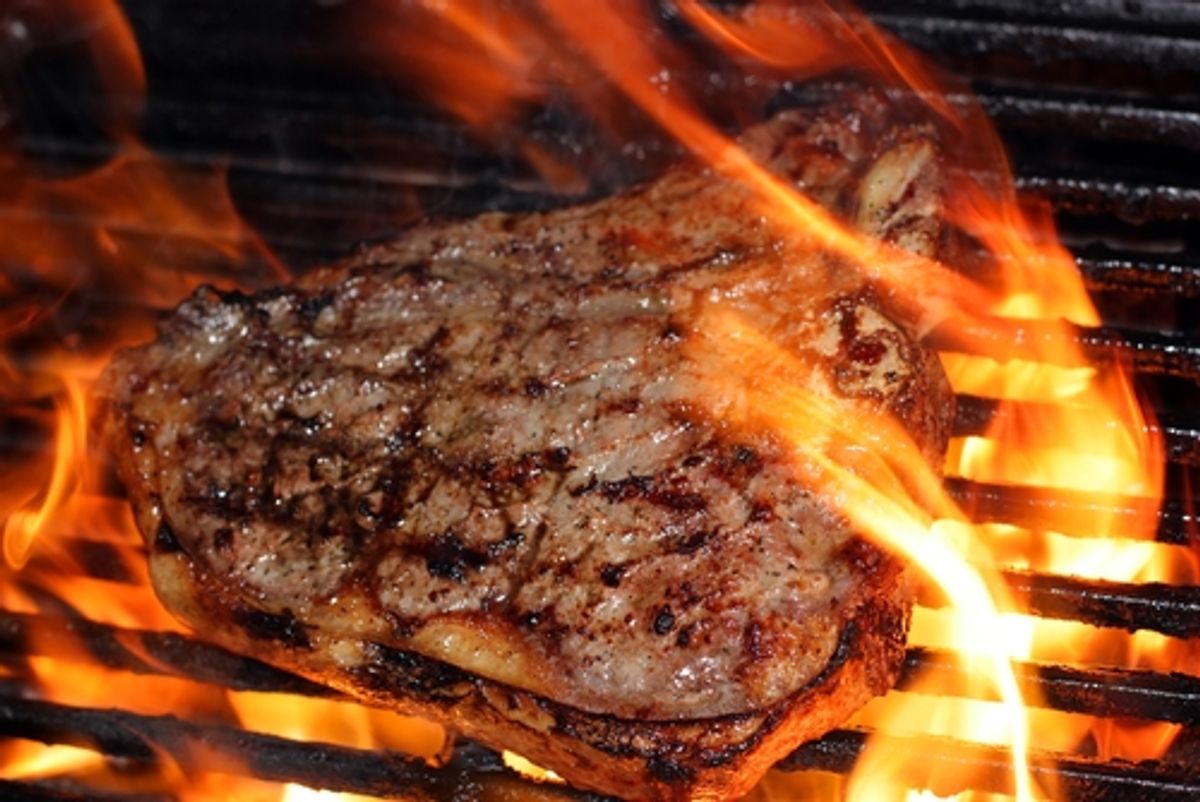 Recently, the US Department of Agriculture announced plans to "relax" federal meat and poultry inspections, allowing meat processors greater leeway in policing themselves, already the agricultural trend. Most food activists ask how standards could be relaxed any further when drug residues, heavy metals, cleaning supplies, gasses, nitrites, hormones and other unwanted guests contaminate the meat supply. They are almost all unlabeled.

Is seafood safer? Dream on. Mercury-filled tuna is what inspired Fischer Stevens to make the Oscar-winning documentary The Cove, about the Japanese dolphin-fishing industry when he personally came down with mercury poisoning. The Chicago Tribune, New York Times and Consumer Reports have reported high mercury levels in almost all red lean and fatty tuna tested, in recent years.

Aquaculture is so festooned with antibiotics, veterinary drugs and pesticides that it can make factory farming look green. Commercial shrimp production, for example, "begins with urea, superphosphate, and diesel, then progresses to the use of piscicides (fish-killing chemicals like chlorine and rotenone), pesticides and antibiotics (including some that are banned in the U.S.), and ends by treating the shrimp with sodium tripolyphosphate (a suspected neurotoxicant), Borax, and occasionally caustic soda," says a review of the book, Bottomfeeder: How to Eat Ethically in a World of Vanishing Seafood.

Meat contaminants are not likely to go away because they stem from Big Meat's desire to maximize profits by growing animals faster, squeezing them into small living spaces and keeping meat looking "fresh" on store shelves longer. Here is a list of the worst offenders.

Most people know that antibiotics are part of the diet of US livestock to make them grow faster (feed is metabolized more efficiently) and prevent disease outbreaks in cramped conditions. But they'd  be surprised at how many animals destined for the dinner table have drug residues that exceed legal limits. Each week the USDA's Food Safety and Inspection Service (FSIS) finds dangerous antibiotic levels in animals including penicillin, neomycin and "sulfa" and "cipro" drugs, many from "repeat violators."

Excessive levels are also found of risky antibiotics like tilmicosin, whose label tells the farmer, "Not for human use. Injection of this drug in humans has been associated with fatalities," and gentamicin, which the FDA, American Veterinary Medical Association (AVMA) and Association of Bovine Practitioners warn against using at all, except under rare circumstances. Unlike bacteria which antibiotics are supposed to kill, "No amount of cooking will destroy [drug] residues" says a USDA Office of the Inspector General report.

You'd think with the antibiotic party going on, meat would be free of bacteria. You'd be wrong. Bacteria are rife in conventionally grown US meat including antibiotic-resistant bacteria also known as superbugs. Almost half of beef, chicken, pork and turkey in samples tested from US grocery stores contained staph bacteria reported the Los Angeles Times in 2011—including the resistant MRSA staph bacterium (methicillin-resistant S. aureus). Pork tested by Consumer Reports in 2013 also contained MRSA and four other kinds of resistant bacteria.

Two serious strains of antibiotic-resistant salmonella, called Salmonella Heidelberg and Salmonella Hadar, forced recent recalls of turkey products from Jennie-O Turkey and Cargill and chicken products from Schreiber Processing Corporation. The resistant salmonella strains were so deadly, officials warned that disposed meat should be in sealed garbage cans to protect wild animals. Even wildlife is threatened by the factory farm-created scourges.

MRSA is no longer limited to healthcare settings, either. Researchers have found it on Florida public beaches and on the top of unopened soft drink cans in a car that was following a poultry truck.

Since antibiotics are no longer doing the job, meat producers are getting creative. They are trying radiation, gases, nitrites and even sprays made of viruses called bacteriophages to quell the germfest. Still, nothing has caused such reflexive revulsion as the news last year that meat scraps once earmarked for pet food were being resurrected as "lean finely textured beef" (LFTB) also known as Pink Slime.

While the product looked like human intestines, what really turned the national stomach was that it was treated with puffs of ammonia to kill the bacterium E. coli. The public was also outraged that the Pink Slime was supplying the National School Lunch Program. Its main producer, Beef Products, Inc., announced it was closing its production facilities, soon after the hoopla began.

But another cleaning product used in meat production is starting to make news: chlorine. According to the website MeatPoultry.com, "99 percent of American poultry processors" cool their "birds by immersion in chlorinated water-chiller baths." The European Union and Russia are duking it out with US trade officials over the chlorine-dipped poultry that few Americans realize they are eating.

Americans eat another product every day that the European Union doesn't want: beef. The European Commission's Scientific Committee on Veterinary Measures says the U.S.'s hormone-heavy beef production poses "increased risks of breast cancer and prostate cancer," citing cancer rates in countries that do and don't eat US beef. As with "lean finely textured beef," aka Pink Slime, Americans are blissfully unaware of the synthetic hormones zeranol, trenbolone acetate and melengestrol acetate that are part of the recipe for production of US beef.

Melengestrol acetate, which is not withdrawn in the days before slaughter, is 30 times more active than natural progesterone, says the European Commission. The powerful estrogenic chemical, Zeranol, is associated with early puberty and breast cancers charges the Breast Cancer Fund, a group dedicated to identifying and eliminating the environmental causes of cancer.

"Consumption of beef derived from Zeranol-implanted cattle may be a risk factor for breast cancer," agrees a recent article in the journal Anticancer Research. And trenbolone acetate, a synthetic androgen? It is on scientists' radar because it masculinizes fish. Too bad the USDA is not as cautious as the European Commission.

Many people have forgotten about Mad Cow Disease, but the risks are far from gone, especially because the government has obfuscated. In its final report about the first US mad cow, found in December 2003, the government said "all potentially infectious product" from the deadly cow "was disposed of in a landfill in accordance with Federal, State and local regulations."

But the San Francisco Chronicle reported that 11 restaurants received the meat. Big difference. The sources of the Mad Cow Disease seen in a second and third cow were never found but the government protected the identities of the Texas and Alabama ranches and let them sell beef again within a month. Mad Cow and related diseases like Chronic Wasting Disease in deer are transmitted by prions which are "rogue proteins" that are not destroyed by cooking, heat, autoclaves, ammonia, bleach, hydrogen peroxide, alcohol, phenol, lye, formaldehyde, or radiation, and they remain in the soil, contaminating it for years.

Because Mad Cow Disease could destroy the US beef industry, officials are quick to dismiss possible human cases. When suspicious cases arise, officials call them "spontaneous" illnesses, not from eating bad meat—even before tests are in.

There is another way factory farmers make animals grow faster besides antibiotics and hormones. The asthma-like drug ractopamine is used in 45 percent of US pigs according to Bacon Bits, the Canadian Pork Industry newsletter. It's also used in 30 percent of ration-fed cattle and a growing number of turkeys. Unlike most livestock drugs, ractopamine is not withdrawn before the animals are slaughtered even though its warning label says, "Individuals with cardiovascular disease should exercise special caution to avoid exposure. Not for use in humans. Keep out of the reach of children," and recommends protective clothing, gloves, eye wear and masks.

Cardiac stimulating drugs like ractopamine cause stress and hyperactivity in animals and they are "not appropriate because of the potential hazard for human and animal health,” wrote researchers in the journal Talanta. "Adding these drugs to waterways or well water supplies via contaminated animal feed and manure runoff," is also a concern, said David Wallinga of the Institute for Agriculture and Trade Policy in an interview, "because this class of drugs is so important in treating children with asthma."

Could ractopamine, added to the food supply in 1997 with little public awareness, be contributing to skyrocketing rates of obesity and hyperactivity in children?

The charge that heavy metals lurk in US meat doesn't come from food activists and consumer advocates—it comes from the USDA Office of the Inspector General. Its 2010 report found high residues of copper, arsenic and other heavy metals and veterinary drugs in beef released for public consumption including. Animals with violative levels of metals, anti-parasite vaccines and medicines were knowingly released into the human food supply by inspectors, says the report.

Pesticides are also a disturbing gray area with only one of 23 high-risk pesticides tested for, the Inspector General's office said. The presence of arsenic in poultry made food news in 2011 when a government study found inorganic arsenic, “at higher levels in the livers of chickens treated” with arsenic-laced feed than in untreated chickens. This prompted Pfizer to stop marketing its arsenic feed, 3-Nitro, since arsenic is a carcinogen in its inorganic form. Worries are not over, though. The FDA still allows arsenic in poultry feed for weight gain and feed efficiency, to control parasites and to improve “pigmentation.” Other arsenic-laced feeds besides 3-Nitro remain on the market.

Why is the meat so red? A few years ago, consumer groups tried to stop the practice of "modified atmosphere packaging" (MAP): exposing meat to carbon monoxide to keep it looking fresh. They weren't successful. Today as much as 70 percent of meat packages in stores are treated with carbon monoxide to keep the meat's red color (oxymyoglobin) from turning to a brown or gray color (metmyoglobin) through exposure to oxygen.

While the meat industry compares meat losing its red color to the harmless discoloration of apples and says MAP keeps products affordable, both the European Commission's Scientific Committee on Food and USDA'sFood Safety Inspection Service have expressed concerns that the artificially hued food can appear fresher than it really is. Thanks to MAP, meat can stay red an entire year!

Consumers do not need to worry about being deceived, said Ann Boeckman, a lawyer with a firm representing major meat companies. "When a product reaches the point of spoilage, there will be other signs that will be evidenced—for example odor, slime formation and a bulging package—so the product will not smell or look right." That's a relief.

Ever wonder why processed meats stay on store shelves for so long, retaining their color and flavor and not spoiling? You have the preservatives nitrite and nitrate to thank. Nitrite and nitrate may make money for food processors, but they are so linked to cancer (when they become "nitrosamines" in the human body) the American Cancer Society tells people not to eat them.

After a 2008 report from the American Institute for Cancer Research and the World Cancer Research Fund that showed eating just one hot dog a day increased the risk of developing colorectal cancer by as much as 21 percent, there were calls to ban processed meat products, especially in schools. Nitrite and nitrate are found in hot dogs, luncheon meats, bacon, Slim Jims and most processed and cured meats. Colorectal cancer is not the only cancer associated with nitrosamines, which have been carcinogenic suspects since the 1970s. They have also been linked, in scientific articles, to lung cancer, kidney cancer, stroke, coronary heart disease and diabetes mellitus. If processed meats sound a lot like cigarettes, you are right. Cigarettes also contain nitrosamines.