RIP to one of the world's best Twitter accounts 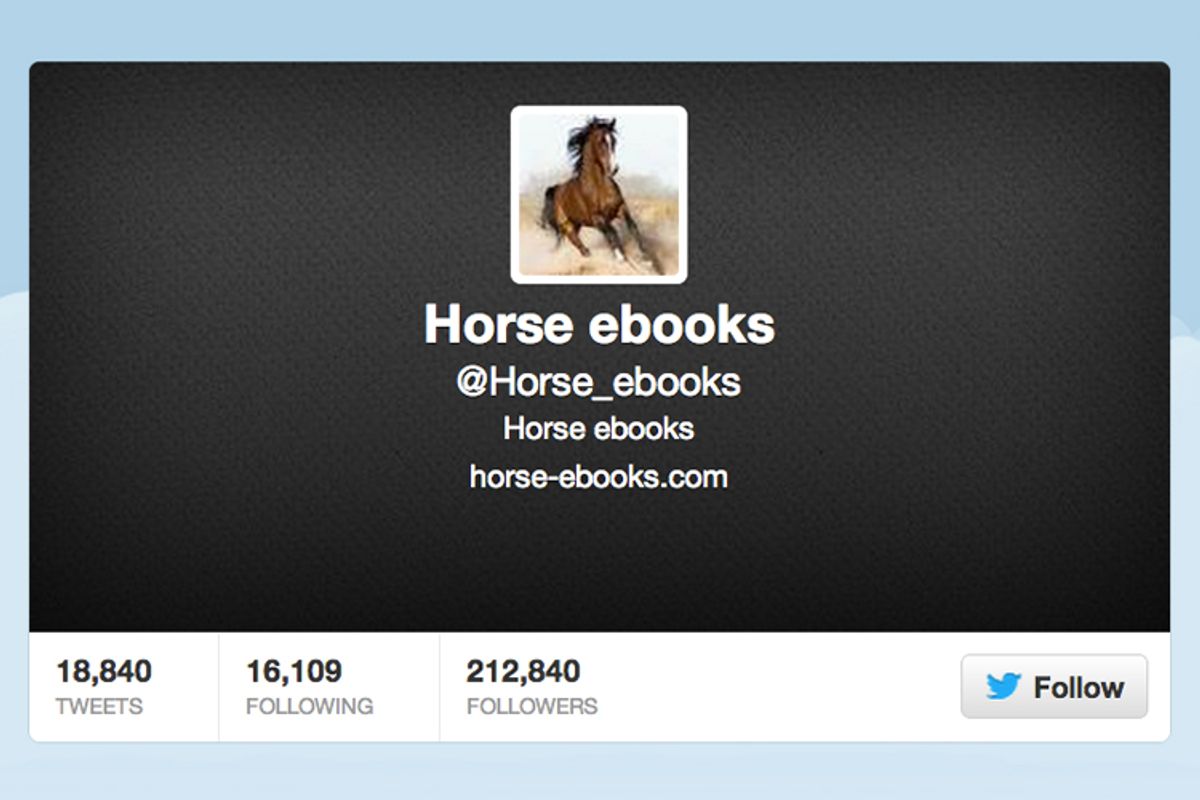 Horse_ebooks is "a full-time Internet" no more. The bizarre, hilarious Twitter account, which has amassed more than 200,000 followers, inspired fan art, yearbook quotes, memes and helped people find true love was, for a long time, the epitome of Internet-based humor. Until today, the world believed Horse_ebooks to be a Russian spambot used to sell bizarrely specific e-books on horses, by chopping up text and spewing nonsensical statements:

In 2012, Gawker's Adrian Chen traced the origins of the Twitter account to Russian Web developer Alexey Kouznetsov, who owns a network of spambots. But in a post on the New Yorker's website today, writer Susan Orlean reveals that Horse_ebooks, along with a sister YouTube channel Pronunciation Book, has been maintained by two men, Jacob Bakkila and Thomas Bender. Bakkila acquired the account from Kouznetsov in 2011. Both men work at BuzzFeed.

The news has become public, sadly, because Bakkila and Bender are retiring Horse_ebooks. They made the announcement at their new art installation exhibit, Bear Stearns Bravo, this morning. Orlean writes:

Most of those questions will be answered today, starting at 10 A.M., at the Fitzroy Gallery, on the Lower East Side. There, the creators of the two accounts, Jacob Bakkila and Thomas Bender, will prove that they are indeed human, appearing in a performance that is the final flourish in this suite of conceptual-art pieces, weaving together Horse_ebooks and Pronunciation Book. They will also launch the next installment of the project, a choose-your-own-adventure interactive-video piece called Bear Stearns Bravo. Bakkila and Bender have been working on the project for almost four years, keeping their identities secret from just about everyone, including their colleagues at Buzzfeed, where Bakkila is a creative director, and Howcast, where Bender, until about a year ago, was the vice-president of product development.

Here's a promo for the show:

One of Horse_ebook's final tweets is a phone number that connects you to the show. (When I called, I got a muffled "marble chiffon cake," which sounds delicious.)

Gawker reports that Orlean is working on a larger profile of Bakkila, Bender, Bear Stearns Bravo and our dear Horse_e.