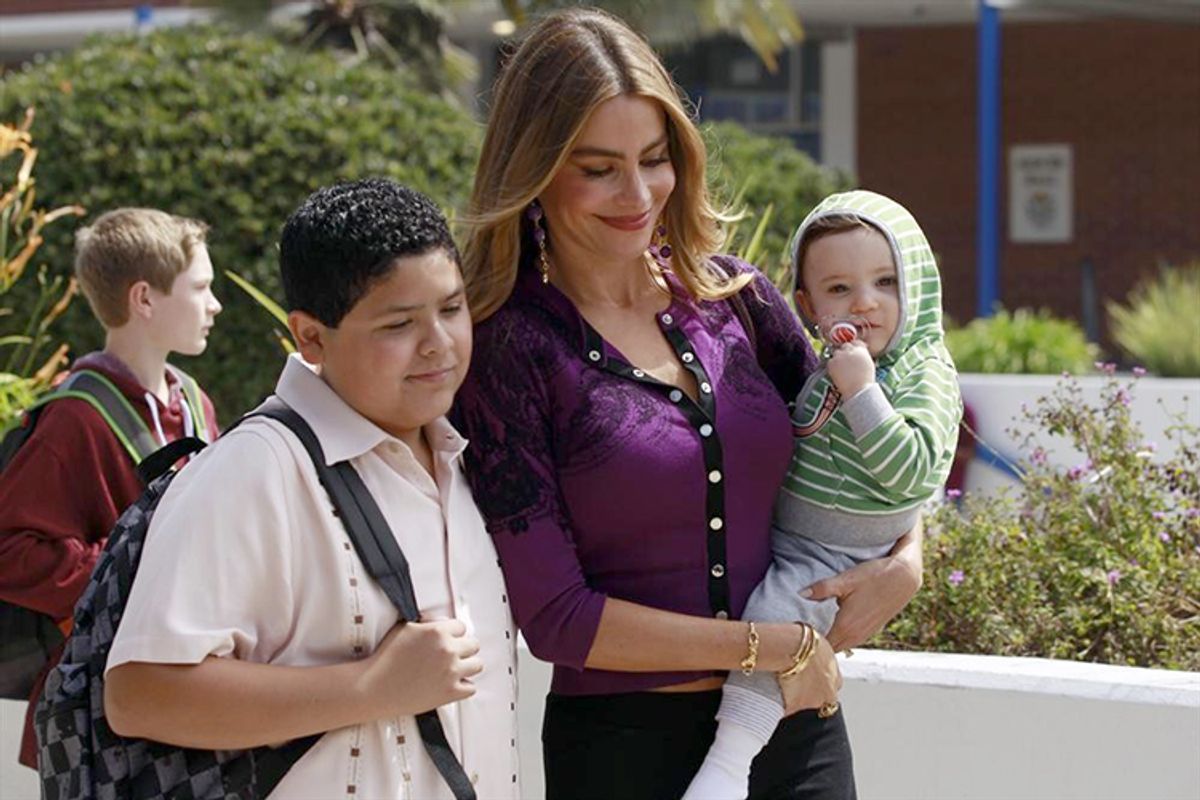 At the Emmys this past weekend, "Modern Family" won its fourth consecutive best comedy series trophy, a predictable result; no other comedy on television so confidently merges mass appeal with critical respect. It's at once widely watched (unlike "Girls" or "30 Rock") and broadly respected (unlike much of the work of Chuck Lorre). And it's presented and marketed, from the title on down, as a series that depicts the state of the American family. That family's success isn't just a fact -- it's the defining fact about them. Within the show, family members subject themselves to interviews with an unseen documentary crew, as though they're a middle-of-the-road test case that can reveal something about life in the U.S.; creator Steven Levitan's Emmy speech this year framed the show's victory as a victory over bullying, for reasons known only to him. Both parties' nominees claimed to be "Modern Family" watchers in the most recent presidential election.

But if Barack Obama and Mitt Romney were getting their news about the American scene from "Modern Family," they were done a disservice. The series, which returns Wednesday night, depicts life in the 2010s as though imagined by someone in the 1990s -- the prosperity will roll on! "Modern Family" centers around three couples, all part of the same clan. These couples are, respectively, a construction company owner and a stay-at-home parent, a real estate agent and a stay-at-home parent, and a lawyer and a stay-at-home parent. It's just presumed that this is how families work; when Claire, one of the stay-at-home parents, expresses regret over her choice, it's because she loved the work she did in hospitality, not because the family is feeling any sort of pinch. Over the course of the series, one or all of these three single-income couples have:

All of these events, not just the bizarrely frequent car smashups, bear little consequence. The family of "Modern Family" seems blithely happy -- when real estate agent Phil experiences work stress, it's over hurt pride that someone is outperforming him, not out of fear that (even in a portrayal of the California real estate market that began in 2009) the real estate industry might be suffering some contractions. Gay couple Cameron and Mitchell adopt children twice on what is, at least the second time around, a single income; Jay takes his stepson on a tour of an expensive-looking private school on a lark.

Not that there's anything wrong with this! The Pritchett clan should do whatever makes them happy in their fictional universe. But the most jarring part of "Modern Family" is that there's no contrasting perspective. Everyone on the show has a large and tastefully decorated home; each of the three families, despite their differences in age, sexual orientation and racial makeup, is able to spring for big group vacations without mentioning the price. Their differences are narcissistically obsessed over, when their commonalities -- the social capital and wealth to afford homes and college educations -- allow them to engage with one another in their preferred, vacation-heavy manner. The show makes a point of drawing out differences in outlook between the older couple, the younger couple and the gay couple -- and yet all of them are able to afford keeping a parent home full-time, and none of them seem ever to meet anyone unlike them out in the world. No wonder they all spend so much time together -- in a still-difficult labor market and with the cost of living rising, they're anomalies.

Fantasies about social class on television are hardly anything new. The mid-to-late 1990s alone brought us the commonly cited examples of Rachel and Monica's comically spacious apartment on "Friends" and the lazy, shopping-filled days of Carrie on "Sex and the City" -- things that would have been impossible for, respectively, a roommate pair of waitress and chef and a single freelance writer to accomplish without incurring staggering debt. (Indeed, late in "Sex and the City," Carrie realizes that she has been living beyond her means for years, if not decades.) In recent years, the fantasy's continued with only the most perfunctory nods to the changes in the American economic climate; folks with traditionally low-paying jobs, like a self-employed limo driver on the recently concluded "Happy Endings" or a group of low-ranking municipal employees on "Parks & Recreation," will acknowledge they have bills to pay in lines of dialogue or live in slightly scrubby apartments, but their financial needs don't in any way impede the plot of any given episode. They still get to do whatever they could want; this season, "Parks and Recreation" kicks off with the entire staff of a small-town parks department taking a trip to London.

All of the aforementioned shows, though, began by focusing on single people. This seems no coincidence: Shows about single people allow the audience to fantasize about a freewheeling, youthful life, while shows about families need less material success to convince viewers that their characters are happy. In the 1990s, Jerry on "Seinfeld" was happy because he could afford to take models to dinner nightly, while Roseanne on "Roseanne" was happy because she lived with her family, even though they had financial difficulties.

With "Modern Family," the twain meet. Family happiness presumes wealth; one cannot say it's contingent on wealth because there's no threat that wealth will ever evaporate. That wealth is never remarked upon in the episode-ending sequences wherein characters describe what they've learned -- instead, it's Walton-like homilies on the value of family and love. If love is all you need, why depict an iPad-toting, Hawaii-visiting clan as average? The most popular and acclaimed comedy on television tells a story where whatever one wants is easily available; it's an attractive fantasy being sold to the public as an examination of the way we live now. Perhaps the extended Pritchett family's denial of a world outside their three big homes is symptomatic of a particularly modern condition. Or maybe, offscreen, Claire and Phil Dunphy have run up huge amounts of credit-card debt to keep up with their family and aren't telling anyone about it, hoping against hope it'll all work out. Now that would be modern.