On TV, men have conviction and women have issues

"Sleepy Hollow" and "The Blacklist" let men be just good or evil, but female characters are weighted with baggage 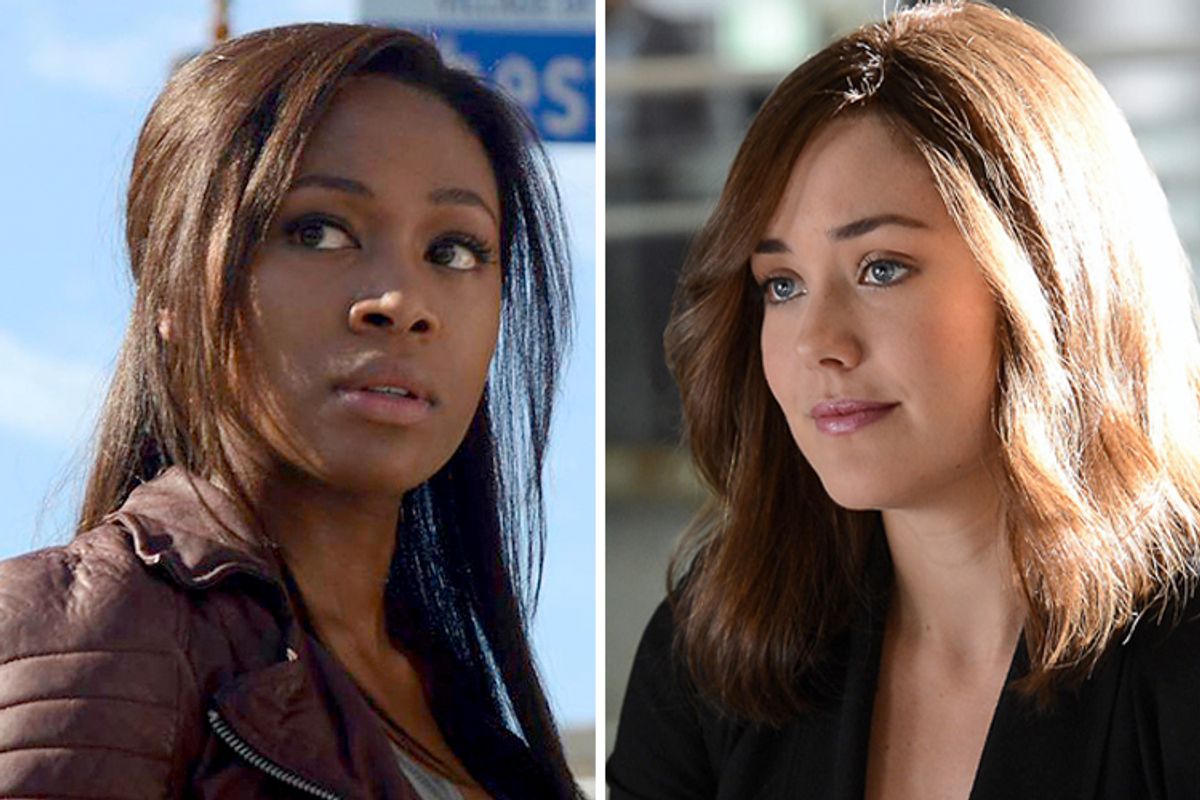 At a glance, Fox's "Sleepy Hollow" and NBC's "The Blacklist" could not be more dissimilar. The first, loosely based on the Washington Irving story, is about a time-traveling soldier/gentleman scholar from the Revolutionary War who finds himself alive in the 21st century chasing down all Four Horsemen of the Apocalypse and however many dark minions it takes to get the show to syndication. A supernatural scavenger hunt with "X-Files" aspirations, "Hollow" brims with eery CGI and complicated, albeit occasionally comic, mythology. "The Blacklist" is "Silence of the Lambs" meets "The Rock," the story of a master international criminal who embroils a rookie FBI agent in his mysterious personal vendetta: a manhunt for the world's slickest crooks. The fast-paced thriller is all tricked out with high-tech hardware and badass lingo spoken by officious feds barreling through black sites and well-placed lens flares.

"Sleepy Hollow's" Ichabod Crane (Tom Mison) is a wiry, know-it-all Brit with wild eyes and a prickly demeanor. (Comparisons to "Elementary's" persnickety Sherlock Holmes are inevitable.) "The Blacklist's" Raymond "Red" Reddington (James Spader) is pompous in a far more classic way, preferring to parcel out advice and unsolicited directives from a position of immoral superiority. Both characters are a joy to watch, but it is their partners, in-over-their-heads female law enforcement agents, who provide the emotional engines for both adventures. Not only are these women the stand-ins for the audience, but it's the pursuit of their own personal demons that propel these stories forward as much as the pursuit of machine gun-wielding kidnappers and actual demons. But are these female characters built from back story or just carrying the typical baggage?

Last week, when first we met "Sleepy Hollow's" Lt. Abbie Mills on the series premiere, her story seemed pretty typical for this type of program. Mills (Nicole Beharie) is a cop in a quiet, little town, fed up with policing a place where a coyote in the stables counts as excitement and looking to step up to the big time by moving to Quantico and joining the FBI. Crane enters her life with tales of undead horsemen and everyone else in the sheriff's department assumes he's nuts. We soon discover, however, that this is not Mills' first brush with the supernatural: As a teenager, she was walking through the forest with her sister and stumbled upon an apparition -- a strange arrangement of white trees and an accompanying demon. The girls blacked out in tandem and woke up elsewhere hours later.

The "blacking out" seems to imply some sort of abduction. Despite the presence of Mills, a black woman, and another sheriff played by the Asian-American actor John Cho, it is hard to think of quaint Sleepy Hollow, population 144,000, as a particularly diverse town. So when, years after, we see old newspaper clippings with Mills and her sister's faces splashed across the page -- two young black girls disappear in Northeast Podunk, USA, and are found later by the side of the road -- you can't help imagining what the community uproar would have sounded like in the real world. Understandably, the show makes no reference to an Al Sharpton type arriving on the scene and, in fact, avoids any speculation on the idea whatsoever.

This week, we learn that after the run-in with the scary, white trees (probably not meant to evoke lynching, but come on!) the sister ended up on a psychiatric ward. Mills herself went through a wayward period. "I did a lot of stupid things to try and shut it all out," says the character. "Drugs. Me and this guy I was seeing broke into a pharmacy." At first, I bristled at the notion of an African-American turning to petty crime because she was spooked by a ghost. More uncomfortable still was the reveal that instead of arresting Mills, the local sheriff -- played against type by typically creepy actor Clancy Brown -- sat her down in front of a plate of apple pie à la mode and told her she ought to straighten up and fly right. In Mills' own words, "I got more fathering in those five minutes than I got my whole life."

I get it. The kindly ol' sheriff who took Mills under his wing dies in the first episode while investigating the horseman. For Mills, this makes the chase Capital-P Personal -- possibly the most effective and overused shortcut in all of modern storytelling. But why couldn't the sheriff had just been a solid mentor, colleague and/or a good friend? The image of this parentless black waif wandering aimlessly around this sleepy town saved by white charity and apple pie seems a tad insensitive and, more so, lazy. Of course, "Sleepy Hollow" is executive produced and written by Alex Kurtzman and Roberto Orci, the creative duo who, despite their overwhelming success with many other projects, may never live down their hand in devising Mudflap and Skids, the infamous, shuffling, racist robots from "Transformers: Revenge of the Fallen."

When we first meet "The Blacklist's" Elizabeth Keen (Megan Boone), she appears to have it all: a dog, a hipster husband with delicately mussed hair and cute glasses who makes her coffee in the mornings, a face like a J.C. Penney's model, and a brand-new, awesome job as an FBI profiler. There's only one more thing the happy couple could possibly want, and they've got a meeting with the adoption agency that very afternoon! Later, after she is unexpectedly selected by notorious traitor Raymond "Red" Reddington to be his unwilling partner, Keen is asked by her superiors to profile herself. From there, things get dark pretty fast.

My colleagues call me 'sir.' They think I'm a bitch. Like most kids who raised themselves, I display narcissistic behavior. I can be withdrawn, disconnected. I have a deep yearning to understand and relate to the criminal mind. I am board-certified in forensic psychology and yet I operate under the delusion that I can rewrite my past by having kids of my own.

Keen is literally scarred; a gruesome burn adorns the palm of her right hand. When she cryptically explains that there was a fire and "someone" tried to hurt her, Reddington implies the injury was the result of bad parenting. Considering that Spader's character is already being set up as an unorthodox father figure for Keen, it's difficult not to assume that, once again, a female character is wrestling with Daddy Issues. (Fuel for that particular flame: Keen's husband is beaten half to death after single-handedly arranging the adoption. She finds his bloody form duct-taped next to a balloon display announcing, "It's a Girl!" Of course, it turns out that hubby's identity is false -- he's actually a spy or something -- thereby completely forestalling Keen's dreams of parenthood any time in the near future.)

To be clear: I like both of these shows. Aside from being fun and stirring, all that written-in pathos gives both actresses plenty of opportunity to showcase their individual skill at quirk and playing what's beneath the surface. Boone, in particular, comes across as wonderfully unhinged. And Beharie gets to bring to the small screen some of those unpredictable ticks, pauses and awkward smiles that layered her stellar performances in films like "American Violet" and "Shame."

Still, it's hard to imagine the male characters on these shows saddled with the same all-too-familiar psychoses. For example, we later find out that Ichabod Crane's wife is not quite dead, but trapped between worlds. Saving her will presumably become his motivation as the series goes on. But at the outset, he seems to want to track down the Headless Horseman because, yunno, it's the right thing to do. "Red" Reddington's drive is less clear. All we really know is that, ostensibly, he is an evil genius. But it is precisely because he is so evil -- and because this is NBC, not AMC -- that we can imagine his intentions must ultimately be good. (Come to think of it, maybe the women are better off. Perhaps Daddy Issues are more fun to play with than no issues at all.)

Both these shows are loaded up with the implausible -- resurrections, midday hijackings, etc. That's what makes them fun to watch. In the interest of keeping them so, their creators may very well be wary of piling on anything more than what they believe the audience can accept -- especially in the area of regrettably superfluous character development. And maybe it's easier to accept baggage we've already seen, whether we actually believe it or not.