10 things not to say to a lesbian

Avoid the following remarks if you’d like to steer clear of arguments, severe eye rolls and physical confrontations 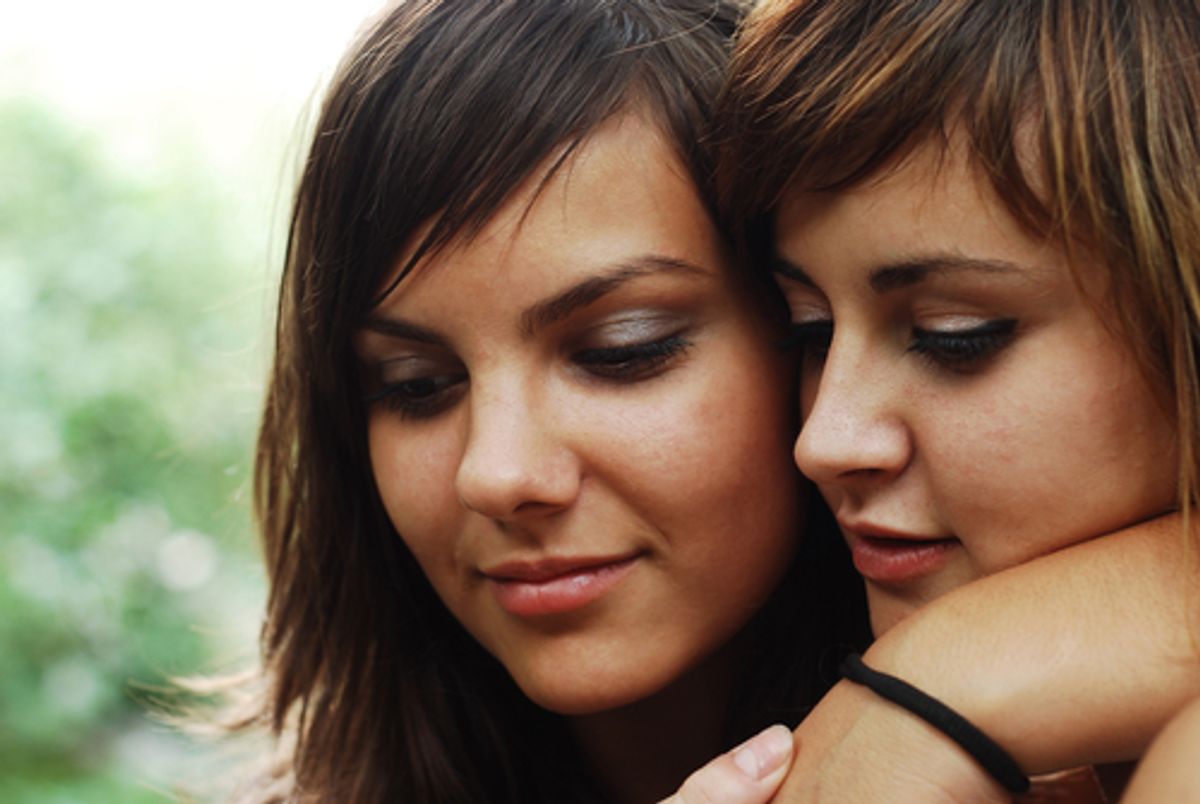 Like medieval German poetry, lesbians (and bisexuals, heteroflexibles, queers, pansexuals, and womyn-loving wimmin) are frequently misunderstood. Sure, you may have read about them in a Women’s Studies class, glimpsed them briefly on Grey’s Anatomy, or in the plaster aisle at Home Depot, but it’s a rare thing indeed to experience lesbians in the wild. Who are these mythical beings? What do they wear now that hipsters have appropriated flannel? Is it true that lesbians move in together after the second date? What does Rachel Maddow have that I don’t? These are some of the questions you may have. While we generally abide by the school rule that there are no stupid questions, when it comes to queer women, sometimes there are stupid questions we’re tired of answering. You should avoid uttering the following statements if you’d like to steer clear of arguments, severe eye rolls, physical confrontations, and being equated with a cave person.

1. Who’s the “man” in this relationship?

Neither. Both. Only when it comes to killing the spiders. In most cases, the relationship in question involves two women: that’s what makes them lesbians. Even in butch/femme pairings, it’s insulting to assume that a queer relationship is imitating a straight one, especially under the rigid and outdated gender roles that the “man” question usually implies.

Possible comeback: “I don’t know. Who’s the man in yours?”

2. So if you like girls, are you attracted to yourself?

Well, first we make an offering to the Goddess. Then we walk counter-clockwise in a circle around a bowl of flax seeds while reciting lines from the Indigo Girls canon. Somewhere around the seventh rotation, our vaginas fuse together in spiritual and ecstatic union. Afterward, we drink rooibos tea and discuss prison reform.

Lesbian sex has been confounding people since the dawn of cucumbers. We’re not sure why, but frankly, we’re tired of explaining to you how sexual acts might occur without the aid of a flesh dildo. But, okay, here goes again: Queer women engage in all manners of sexual acts, up to and including those involving hands, toys, mouths, feet, whips, clamps, mind-melds, food, and any number of objects that are vaguely penis-shaped and can be used in a pleasure-giving way. It’s not Parcheesi, okay? There’s not one right and true way lesbians get it on. There are, like, four, at least. (Kidding.)

4. How do you know you’re a lesbian if you’ve never had sex with a man?

How do you know you’re straight if you’ve never had a dick in your mouth? Or vice versa.

There is a pervasive cultural assumption about queer women, particularly bisexual ones, that when we aren’t busily destroying the sanctity of nuclear families, we are champing at the bit to have a threeway with a dude. (See also: 9 Myths About Bisexuals That Will Make You Laugh.) Don’t get us wrong, we like threesomes (look, ma, six hands!), but the threesome-as-holy-grail has led to a barrage of awkward online propositions and drunken come-ons. It’s grown tiresome. Please acquire a new hobby, such as furniture restoration or windsurfing. Unless the woman in question explicitly states that this is her desire, don’t make any assumptions, and especially don’t do that thing with your tongue.

This is an insult disguised as a compliment that implies lesbians are hideous bridge trolls who are only gay because no man wants to see them naked. It also erases the possibility that lesbians can be feminine, which is ridiculous. Lots of lesbians are feminine—we even have a word for it: femme. And though we might wear makeup/skirts/have long hair, etc., we still probably don’t want to sleep with you, especially not after you say that.

Possible comeback: “Portia di Rossi.” Though really, we don’t even think this justifies an answer. Just look at them blank-faced and back slowly away, as you might if you stumbled upon a live caribou at TJ Maxx.

7. So since you married a man, you're not bi anymore, right?

Being in a heterosexual relationship doesn’t negate your sexual identity nor all your former romantic partners throughout history. If you still lust after ladies, then you are bi, regardless of whether you ever act on it again. We wish sincerely that we would stop policing each other’s sexuality, which is not an either/or proposition. Besides, bisexuality is not something you have to prove. If it was, you could always sleep with the girlfriend of anyone who asks you whether you’re bi “anymore.”

8. What do you have against dick?

Nothing at all. We’re big fans. We once attended a luncheon on the State of Penises Today and it was riveting. Joe Francis gave the keynote. Seriously, it’s not personal. Questions like this are right up there with the tired stereotypes about lesbians as man-haters with nothing more than a severe case of penis envy. Really, it’s just a case of you saying tom-AY-to, and us saying put-it-AWAY-to; we’ll have the fish.

We have several dicks, thanks. One of them glows in the dark!

9. You just haven’t met the right man yet.

Misinformed relatives hoping we will still incubate some grandchildren (and who for some reason equate lesbianism with infertility) often says this. It’s highly insulting and intrusive and presumptuous, and implies that queer women become so due to bad experiences with men. This is not to say that queer women have never been hurt by men and that bad experiences don’t inform people’s opinions, but it’s very unlikely that Jill’s going to join the muff-diving squad because Jack wouldn’t stop talking about Fantasy Football.

Besides, we know lots of single straight ladies who haven’t met their No. 1 Perfect Soul Mate Forever. We know approximately zero of those ladies who have spontaneously become gay because they were tired of waiting around.

10. I wish I were a lesbian. Things would be so much easier.

Right, except for the hate crimes, bullying, higher suicide rates, workplace harassment and discrimination, possibility of being stoned to death or flogged in some countries, Russia’s violent crackdown on LGBT people, assault, depression, stigma, familial/religious persecution, having to come out every time you meet a new person, threats of being disowned by loved ones, and having to field the above questions over and over again until you die.

Except for all that, it’s great. Ellen has a talk show, you know, so we can’t complain.