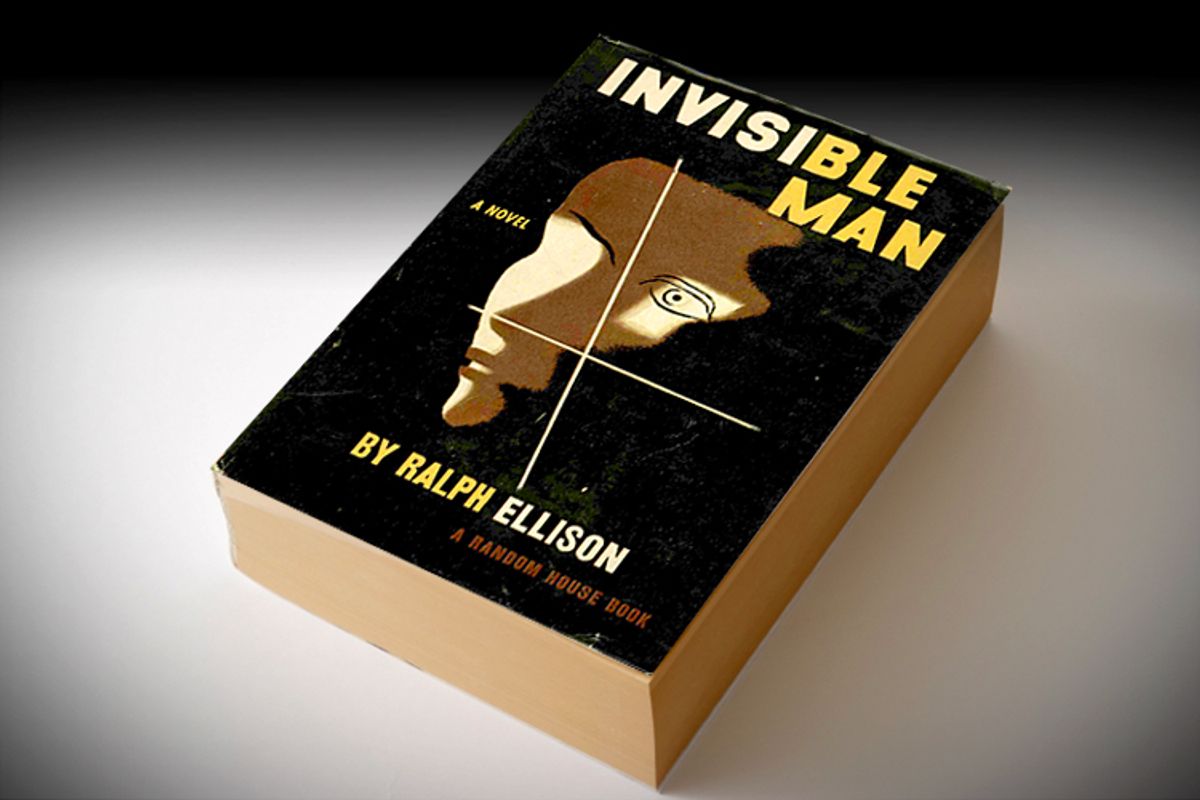 One thing I've learned in the past week is that most Americans really hate book banning.

In a case of weirdly appropriate timing, the Randolph County Board of Education in North Carolina voted last week to remove Ralph Ellison's "Invisible Man" from the shelves of the county's school libraries. This was only days before the official start of the American Library Association's Banned Books Week. Banned Books Week was created to call attention to attempts to challenge and remove books from libraries, and because most of those attempts seek to restrict children's access to books, Banned Books Week is unofficially a celebration of young people's freedom to read.

The Randolph County Board of Education decided to ban Ellison's celebrated novel -- winner of the 1953 National Book Award, No. 19 on the Modern Library list of the greatest 20th-century novels, named one of the 100 books that "shaped America" by the Library of Congress, etc. -- on the basis of one parent's complaint. That parent objected to the sexual content in "Invisible Man," maintaining it was "inappropriate" and "filthier" [sic] reading for high school juniors (16- and 17-year-olds). She persisted in her demand that the book be removed from school libraries even after a school committee reviewed her request and decided against her. The matter was put before the seven-member board, who voted 5-to-2 on Sept. 16 to withdraw the book from the library.

Misconceived actions like this happen fairly often. Suddenly a local government entity like a school board -- officials who usually need only please the squeakiest wheels in their small communities -- gets cast onto a national stage. Media coverage briefly explodes, and drive-by commenters use the occasion to rant about the narrow-minded censoriousness of their fellow citizens, especially those who live in small towns. Frequently, local officials are obliged to walk back their decision, but by then the outrage-of-the-day news cycle has moved on.

The Randolph County ban caught my eye because I've long loved "Invisible Man"; what "The Catcher in the Rye" is to many teenage readers, Ellison's novel was to me. Even though I'm not black, his narrator's skepticism and disillusionment with just about every institution he encounters, black or white, spoke to my prematurely jaded adolescent self. Furthermore, my class read "Invisible Man" just after we read Dostoyevsky's "Notes From the Underground," an experience that gave me one of my first glimpses of how literary influence works.

A fellow journalist, Evan Smith Rakoff of Poets and Writers magazine, took special notice of the story, too. He was raised in Randolph County, in the city of Asheboro, and book banning did not jibe with his sense of the town and its values. "The people of North Carolina want their children to have expansive, open minds," he told me. "That is how I was taught, at Fayetteville Street Christian School where I attended kindergarten, in the classrooms of Loflin Elementary, in the Randolph Public Library (where I participated in summer reading programs) and at Asheboro High School."

It was also clear from the local response to the story in the Asheboro newspaper, the Courier-Tribune, that many area residents wholeheartedly agree with Evan. It was hard to find anyone speaking in favor of the ban. It didn't help the Board of Education that Courier-Tribune reporter Kathi Keys has been admirably thorough in covering the story, up to and including grilling board members to confirm that they had in fact read the entire book. (They refused to answer.) On the day of the original vote, the chairman, Tommy MacDonald, pronounced Ellison's masterpiece a "hard read," while another member, Gary Mason, said, "I didn’t find any literary value. I'm for not allowing it to be available."

"Hey," I said to Evan, "why don't we figure out a way to get free copies of 'Invisible Man' to Randolph County high school students?" Everything came together pretty fast after that. Vintage Books, publisher of the novel, instantly agreed to donate two crates of books; Books-a-Million, a bookstore chain with a shop in the Randolph Mall, agreed almost as quickly to distribute the books. Asheboro's public librarians offered their support, too. High school students agreed to spread the word to their teachers and friends.

Within a couple of days, it was all set, and starting on Wednesday, every Randolph County high school student can receive a free copy of Ralph Ellison's "Invisible Man" at the Books-a-Million store in the Randolph mall, while supplies last. The last time I spoke with the store's manager, she mentioned that local adults -- and even some callers from out of town -- have been purchasing additional copies to add to Vintage Books' generous donation.

While throwing this impromptu giveaway together has been fun for everyone involved, what's struck me most is how passionately the people I've spoken with care about the freedom to read. Whether that means donating books or cutting through the usual corporate red tape to make the project happen in time, this issue really matters to them. Many of the people chipping in are lovers of "Invisible Man," but others simply can't stand the idea of a book being stripped from library shelves on the judgment of a handful of misinformed people. It strikes most of us as just plain un-American.

The citizens of Randolph County have made their disapproval felt in other ways, as well. Late last week, the Board of Education called a special meeting for 5 p.m., Wednesday, Sept. 25, to reconsider the removal of "Invisible Man" from school libraries. Everyone I've spoken to in North Carolina feels optimistic that the ban will be overturned, and several are planning to attend the meeting. Let's hope the board has finally learned its lesson.