Could portable solar power liberate me from the grid? 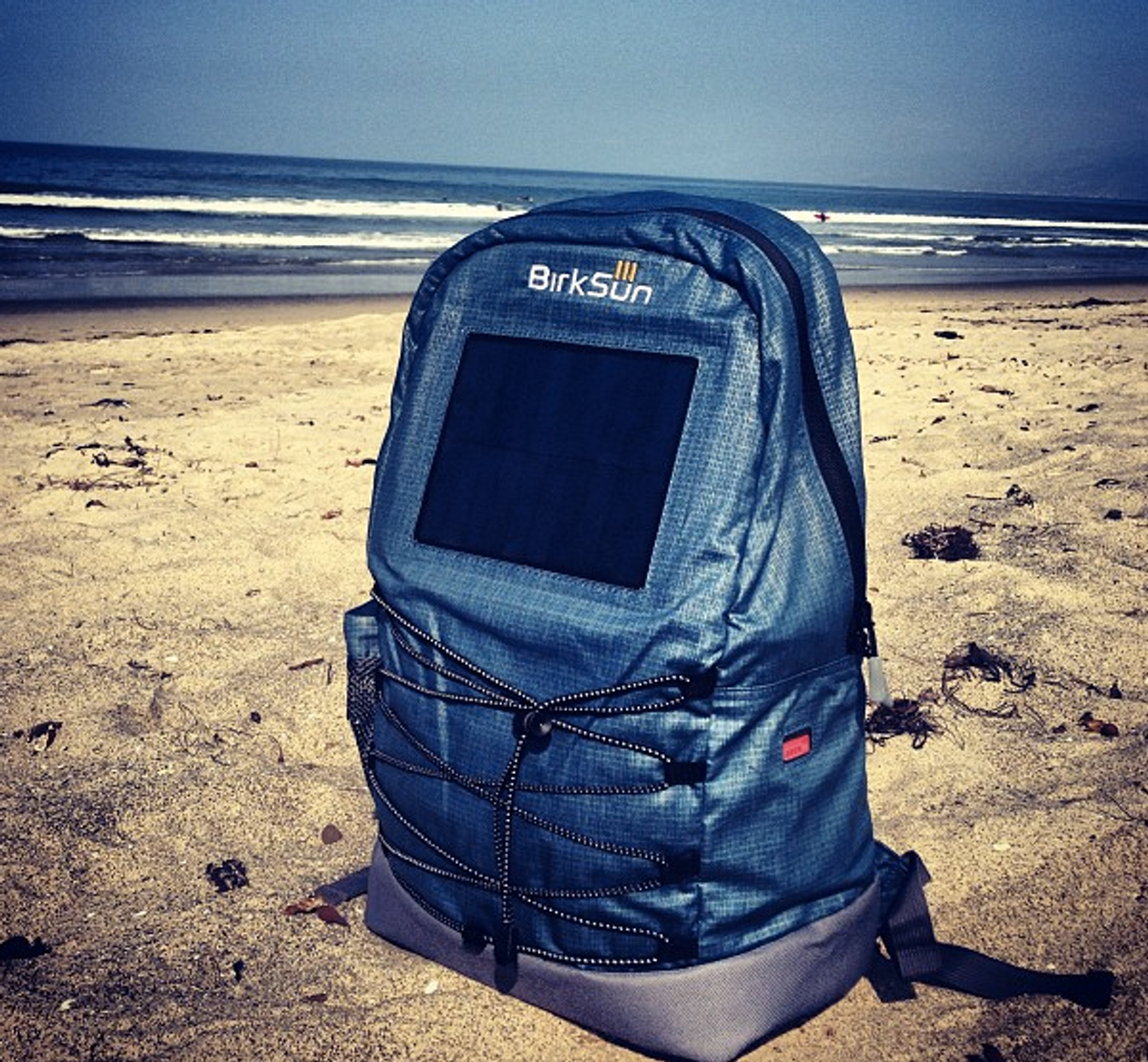 The BirkSun, shown in Levels Teal, has a built-in solar panel and rechargeable battery (BirkSun/Instagram)
--

It was approaching dusk and raining the afternoon I first brought home my BirkSun solar backpack. This led to my first discovery about portable solar power: It only works when you have access to the sun.

And access to the sun isn’t a given when you have a desk job in a city.

BirkSun’s premise is simple enough: It’s a standard hiking backpack with the added ability to turn the wearer into a walking solar panel. Or, as its prominently featured solar panel sometimes made me feel, into something resembling a backward Teletubby. A wire connects the panel, made of something called “SunPower patented Maxeon cell technology,” to a poly lithium battery -- the same type found in an iPhone, but with more storage capacity.

The solar panel absorbs the sun’s rays, converts them to energy, and voilà! -- the battery charges. A series of nifty adapter cables allow the user to then transfer that charge to her phone, tablet or other portable electronic device.

The battery can also plug into a wall socket, allowing it to serve as a more standard source of portable power. I had bigger plans. For the first time, I was going to experience the grid-free bliss of solar power firsthand. At least, that was the plan.

The rain had passed by the next morning, and I walked out of my apartment into the bright light of day, the solar panel pointed optimistically up. Almost immediately, the blue indicator light on the backpack’s battery began to blink. Since this technically counted as work, I skipped the subway and walked the 30 or so minutes to Salon’s midtown office. Watching, through a clear window in the pack’s side, as the battery built up a charge, I criss-crossed the street to avoid the shadows cast in the canyons of Midtown. Once you start paying attention, New York is filthy with scaffolding.

But my walk to work wasn't enough, it soon became clear, to power my iPad for more than a few minutes. And there began an unsettling realization: I just may not spend enough time in the sun to juice my electronic devices.

My next attempt came on a Saturday afternoon, when I brought the backpack to an outdoor concert; I spent over an hour standing in one spot with clear access to the sky. The sun wasn’t out in force, but Richard Highsmith, BirkSun’s founder, had told me the panel would work even when it’s cloudy; even, he said, when it rains.

I wasn’t willing to try that, but during the concert, the battery again appeared to be charging. When I attached it to my iPhone, though, the little lightning bolt icon only appeared for a few minutes. After that, the BirkSun battery was completely depleted – and so, it seemed, were my hopes for a big city solar-powered life.

Frustrated, I arrived at work one morning and propped the BirkSun up in an office window, next to a healthy-looking houseplant. I left it there for a few hours, its panels facing the outdoors, while I basked in the glow of my computer and my phone charged from a nearby outlet.

When I went to retrieve the backpack from the windowsill, its battery was flashing at 50 percent – a record high. Progress! Just not of a particularly useful sort.

Even if I were able to use the backpack to entirely charge my phone and tablet, eschewing the grid wouldn’t have much of an impact. The amount of energy it takes to power small electronic devices is minuscule.

As Richard put it to me, “It’s not like you’re going to save 8,000 Amazon forests.” Still, he promises that the next version of the bag will be made entirely of recycled materials. The batteries themselves are recycled by BirkSun and resold online. All in all, it’s coming from a sustainable place

Much, much greener. I mean, I’m carrying a solar panel around on my back!

- As a conversation starter, the backpack is a great thing to bring to a party. It wasn’t so cool that the bouncer was willing to wave me through when I couldn’t find my ID at an outdoor bar, but he was kept busy examining it while I searched through my wallet.

- On the other hand, I can imagine a stricter security scenario where the battery pack and many wires piled inside might cause trouble.

- Aside from their phones, Richard said, BirkSun customers use the backpack to charge cameras, speakers, tablets, GPS devices, water purifiers, LED lights and lamps. He claims he used it to keep his phone running during a weeklong hiking trip.

- The bag can’t charge laptops yet, but BirkSun’s working on it. If there’s one thing this experience taught me, it’s that I need to spend more time outside -- and it would be nice to pass a sunny fall day outside in a park, outside and at work at once.

- So far as backpacks go, it’s a nice one. And it’s definitely functional: Even though it didn’t do much for me, charge-wise, it definitely allowed me to tote my stuff around comfortably.

If you’re just in the market for portable power, you can rely on a wall outlet to keep the bag charged, leaving it to the sun to replenish the battery a little bit at a time. If, unlike me, you don’t have your pick of power strips available most of the time, the BirkSun makes a convenient backup.

The basic model BirkSun bag retails for $150. It’s about twice what you’d spend for a really good-quality hiking backpack of the same style and size: It’s comfortable, with padded shoulder straps, a bungee cord in front and a laptop sleeve inside. Again, though, you’re not saving so much on the electricity front. It only costs about 25 cents per year to charge your iPhone; your iPad, about $1.36.

But so far as investments go, it’s a pretty solid one. Whenever BirkSun decides to release a newer, better bag, you can return your old one and get 30 percent off the new purchase. The older model will be sent to women in developing countries through a nonprofit that empowers them to start sustainable businesses.

The BirkSun backpack can provide some extra charge to small devices if you’re spending a lot of time in the sun – and it just might inspire you to get out more -- but it’s not going to allow you to leave the grid entirely behind.