"The Good Wife" gears up for battle

This season looks like open warfare at the show's law firm. Which side will Alicia Florrick choose? 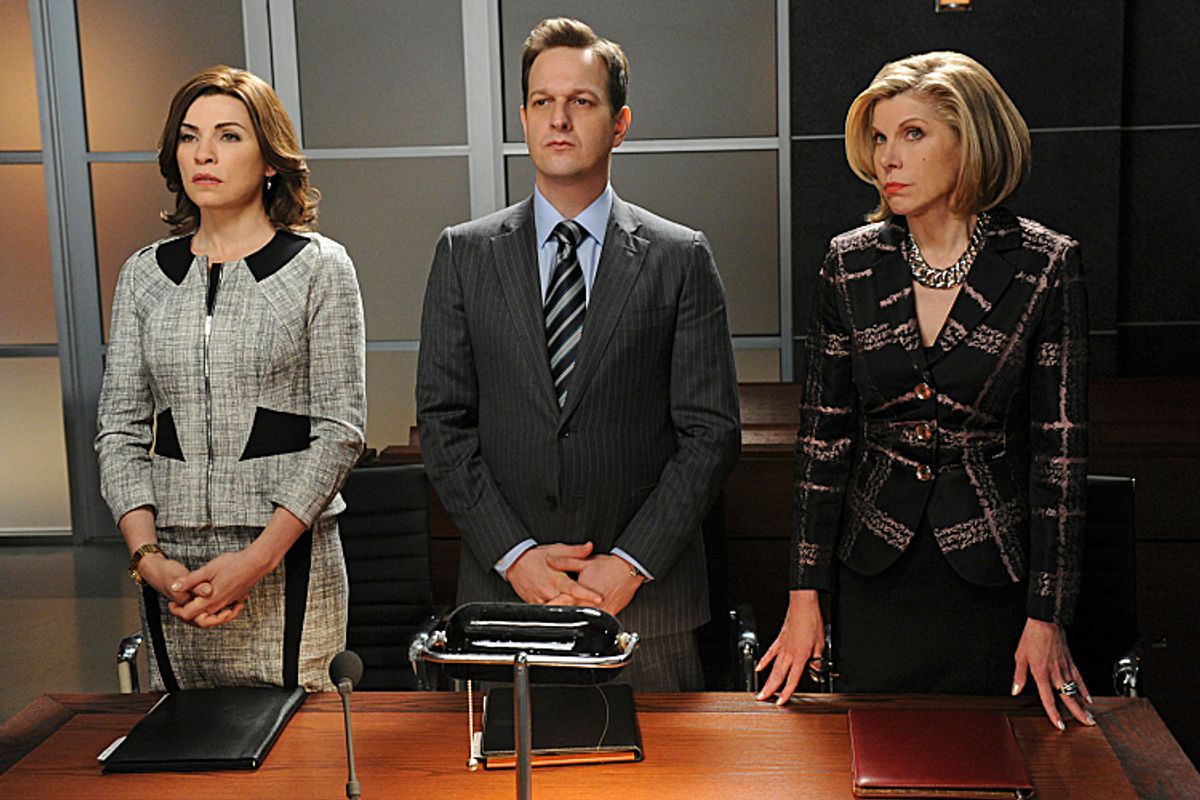 "The Good Wife" has come a very long way since its main character Alicia Florrick appeared to be a mere stand-in for Silda Spitzer in a soapy drama about philandering politicians and their jilted wives. And yet it hasn't. And, of course, the show never really was just that, anyway.

"Good Wife" creators Robert and Michelle King have openly admitted that their baby was initially inspired by headlines. And the show's writers have never abandoned that approach to unearthing material. But part of the joy of "The Good Wife" is that the show does not merely source the salacious. Often, the best episodes are culled not just from newspapers but from pop culture rags and assorted legal briefs, all pinned up as a backdrop for the show's ongoing story and reliably sexy, witty characters. This season's premiere, airing Sunday night, is a brisk, gleeful example of what "The Good Wife" does best.

Despite a jaunty score, the case of the week is a grim one. A convicted murderer on death row, played by journeyman actor and Brooklyn, N.Y., resident Malik Yoba, has his demise forestalled when his executioners are unable to correctly administer the poison. (He's got "rolling veins." I Googled it so that you don't have to.) Seeing one last chance to free their client, the dogged attorneys of Lockhart Gardner spring into action. They claim that the prolonged process of over-sticking the prisoner is tantamount to torture and cite Broom v. Strickland. This real case becomes the jumping off point for a taut, darkly funny story about going to extremes to buy time -- with a man's execution as the final bell. As an added dose of meta, Innocence Project founder and O.J. Simpson defense attorney Barry Scheck makes an extended appearance. (He's good; they should make him a regular.)

The episode also includes a running visual gag about telecommuting. Hopefully, these guys' sales don't suffer after having spectacularly nasty divorce lawyer David Lee (Zach Grenier) denigrate their product and its use on network television. One of my favorite continuing jokes on "The Good Wife" is the fictitious Internet search engine Chumhum owned and operated by Neil Gross, a frequently loathsome recurring character played by recent Emmy nominee John Benjamin Hickey. As I always enjoy watching "The Good Wife" skewer Google and tech industry malpractice via Chumhum, I was delighted to see another Internet presence introduced in this episode. Perfect-haired fortunate son Zach Florrick (Graham Phillips) stumbles upon a picture of his sister on Turbochap.com, home to a list of the nation's hottest politicians' daughters.  (And we thought he was the pretty one!) I couldn't resist Googling that heading and -- sure enough -- an identically titled list shows up on some site called Guyspeed.com! I now have this image of a roomful of "Good Wife" interns getting paid a weekly stipend to find digital oddities on off-brand websites and sort of alter the names per the CBS legal department's stringent guidelines.

Aside from all the references both zeitgeist-y and obscure, "The Good Wife" is very much about politics -- not national politics, but office politics. And this episode sets the stage for what will likely be a season-long civil war between the leading partners at Lockhart Gardner and the uppity fourth-year residents, led by Cary Agos (Matt Czuchry), who are planning a daring secession. Will newly made partner Alicia Florrick jump ship with the young bucks or side with the muckety-mucks? While a competent and gifted lawyer, she has mostly clung to the sidelines -- if not the shadows -- as her husband and her fellow lawyers scramble for power. It will be interesting to see if she will, at last, strive to match her mentor Diane Lockhart's (Christine Baranski) remarkable accomplishments.

And, as always, Florrick struggles to balance the intrigue of her own career with her obligations to her husband, Peter (Chris Noth), who has recently become the governor of Illinois. Last season, Alicia shut the door on her dalliance with colleague Will "The One That Got Away" Gardner (Josh Charles) and reconciled with Peter, followed by a relatively extended moment of marital bliss for the troubled couple.