Unsold merchandise is piling up in Walmarts

And the retailer is cutting orders. What does it mean for the economy? 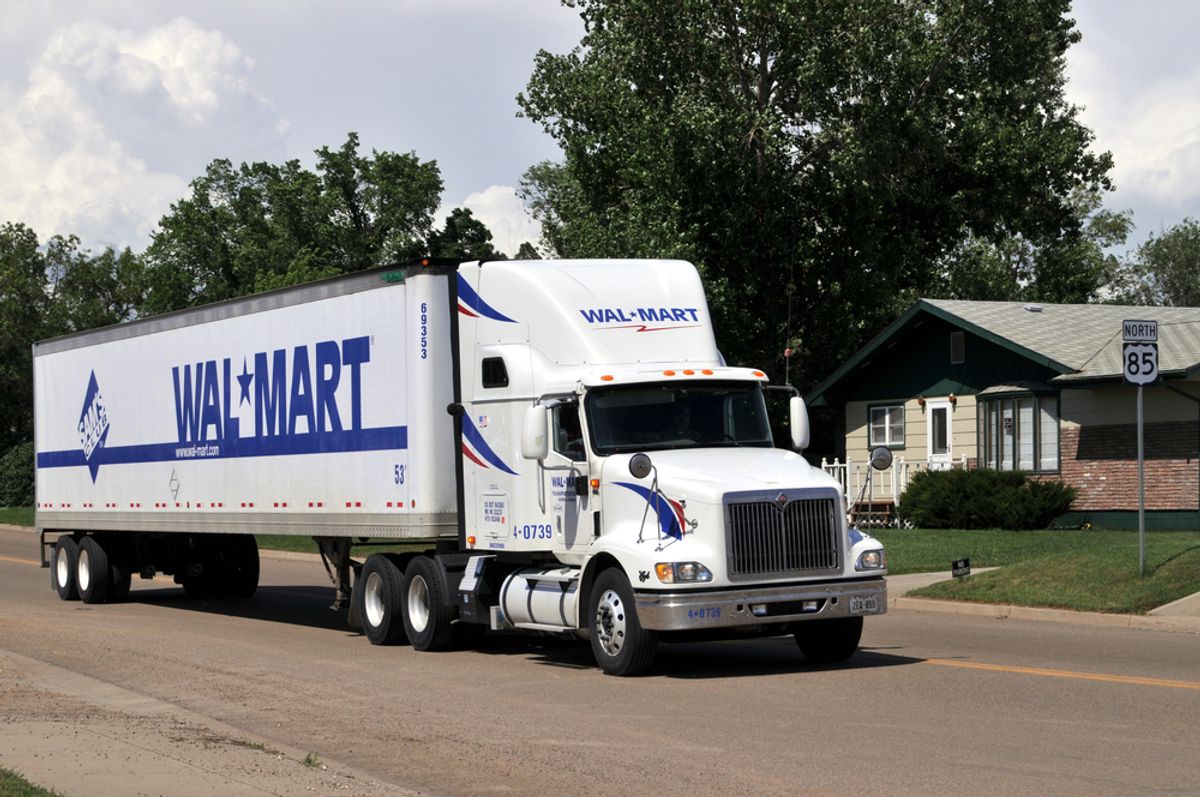 Sept. 25 (Bloomberg) -- Wal-Mart Stores Inc. is cutting orders it places with suppliers this quarter and next to address rising inventories the company flagged in last month’s earnings report.

Last week, an ordering manager at the company’s Bentonville, Arkansas, headquarters described the pullback in an e-mail to a supplier, who said others got similar messages. “We are looking at reducing inventory for Q3 and Q4,” said the Sept. 17 e-mail, which was reviewed by Bloomberg News.

U.S. inventory growth at Wal-Mart outstripped sales gains in the second quarter at a faster rate than at the retailer’s biggest rivals. Merchandise has been piling up because consumers have been spending less freely than Wal-Mart projected, and the company has forfeited some sales because it doesn’t have enough workers in stores to keep shelves adequately stocked.

“Wal-Mart’s inventory is well above their goal,” said Poonam Goyal, an analyst at Bloomberg Industries. “Most of the inventory increase was because of missed sales.”

U.S. chains are already bracing for a tough holiday season, when sales are projected to rise 2.4 percent, the smallest gain since 2009, according to ShopperTrak, a Chicago-based firm. Wal- Mart cut its annual profit forecast after same-store sales fell 0.3 percent in the second quarter. This week the company said it was adding 35,000 permanent workers and increasing the hours of an additional 35,000, as well as hiring 55,000 seasonal workers.

Wal-Mart’s order pullback is affecting suppliers in various categories, including general merchandise and apparel, said the supplier, who has worked with Wal-Mart for almost two decades and asked not to be named to protect his relationship with the company. He said he couldn’t recall the retailer ever planning ordering reductions two quarters in advance.

In a telephone interview, David Tovar, a Wal-Mart spokesman, said the order pullback isn’t “across the board” and is happening “category by category.”

Wal-Mart has said in filings that its “corporate goal” is “growing inventory at or less than the rate of net sales growth.” For its U.S. segment, the company has hit that goal only twice in the past 10 quarters, according to data compiled by Bloomberg News. The last time was four quarters ago.

In the second quarter, U.S. inventory grew at 6.9 percent and U.S. sales grew at about 2 percent. In the same quarter a year earlier, inventory increased 3.6 percent while sales rose 3.8 percent. Target Corp. stores and Dollar General Corp. held their second-quarter inventory gains to about twice the rate of sales growth versus triple the pace at Wal-Mart.

Bill Simon, chief executive officer of Wal-Mart’s U.S. division, said last month that inventory increased due to “softer than anticipated sales trends, the delay in summer weather and timing shifts in the receipt of merchandise for back-to-school and the upcoming holiday season.”

Through yesterday Wal-Mart had gained 11 percent this year, compared with a 19 percent advance for the Standard & Poor’s 500 Index.

Even as Wal-Mart seeks to clear its inventory, holiday merchandise is showing up early at stores in states including Illinois, Texas, California and Colorado, according to workers at those locations. Some of them said there is already insufficient room for existing merchandise, forcing them to put the seasonal goods out as soon as they arrive -- about a month earlier than usual.

At a store in Boothwyn, Pennsylvania, on Sept. 14, pallets of Christmas tree lights sat in the middle of an aisle beside dozens of unopened cardboard boxes of Halloween decorations. A 28-inch light-up penguin was being sold for $19.98 beside plastic jack-o-lanterns selling for $1.

It’s a similar scene in Hurst, Texas, said Donna Kennedy- Medford, who has worked at the store for two years.

“This year, there’s more earlier than last year,” she said of the Christmas items. “We have some of it in the back, and some of it has been put out on the floor in a haphazard fashion.”

Wal-Mart is already struggling to keep shelves stocked, in part because stores lack the manpower to move items to sales floors from back rooms and shipping containers in parking lots. The U.S. workforce at Wal-Mart’s namesake and Sam’s Club warehouse chains fell by about 120,000 employees in the past five years, to about 1.3 million, according to regulatory filings. In that time, the company has added more than 500 U.S. stores through July 31.

Because back rooms are often full, seasonal merchandise such as Christmas decorations sometimes must be moved directly to the sales floor, said Barbara Gertz, who has worked as an overnight stocker at the Wal-Mart store in Aurora, Colorado, for almost five years.

“The bulk of the freight doesn’t usually come until two weeks before Black Friday,” said Gertz, a member of OUR Walmart, a union-backed group seeking to improve working conditions at the chain.

This year is different, Gertz said.

“The aisles in the back room are so backed up with stuff,” she said. “We brought three pallets of Christmas trees out to the garden center. We usually do that in mid-October. We’re filling it up pretty quick for only being mid-September.”

The early Christmas inventory is displacing other items that are being marked down, Gertz said. Asked about inventory growth during a call with analysts in May, Carol Schumacher, vice president of investor relations for the company, said, “we tend to mark down until we move it out.”

That’s the case at Kennedy-Medford’s store in Texas, where kids’ clothes have sold for as little as 25 cents, she said.

The early arrival of holiday goods is throwing off shoppers such as Troy Hollar, who regularly shops at Wal-Mart for his family of seven. Hollar, who worked as a stocker at the Crawfordsville, Indiana, Wal-Mart until last year, said several shipping containers used to store early or excess merchandise were sitting in the parking lot of the local store last week.

“The biggest question I have is: How can they put out this stuff two months early and they can’t even have regular stuff out?” said Hollar, who has had trouble finding routine items such as baby wipes and paper products in stock at the store. “Most average people wouldn’t consider buying Christmas stuff for a long time. That’s just wasted space.”

To contact the reporter on this story: Renee Dudley in New York at rdudley6@bloomberg.net