From shootouts to magnets to harrowing phone calls, the show keeps knocking the wind out of us 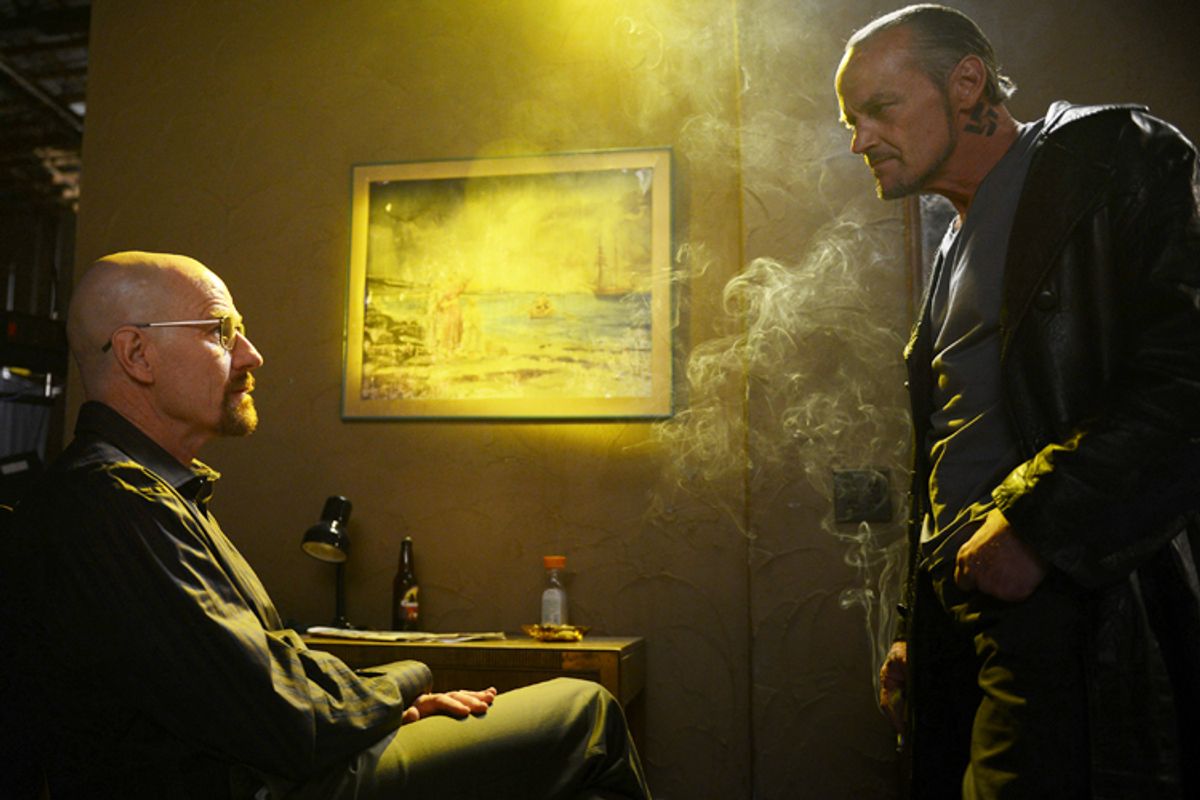 When we think back on the experience of "Breaking Bad" season five, we’ll remember its quality, the debates over the subtext in that pivotal, police-bugged phone conversation between Walt and Skyler, and perhaps even the way that a stunned Hank and Marie Schrader inadvertently provided the only proper response to what Miley Cyrus and Robin Thicke did during the 2013 MTV Video Music Awards. But before all of those things, what we may recall is the way it felt to watch those last few episodes.

The "Breaking Bad" pilot may have started with an adrenaline-rushing RV ride, but the entire final season has felt like one, practically from beginning to end. "Breaking Bad" is an extraordinarily intelligent show, one that prompts critics and fans to devote enormous amounts of time and energy to analyzing its deeper meanings. But it’s also a series that provokes a visceral response, especially during its current pulse-pounder of a curtain call. You watch it every week and wonder whether it should be preceded by a a surgeon general’s warning.

Even people with smoothly running cardiovascular systems may have felt like they were having quite a few heart attacks during season five part one -- which resulted in "Breaking Bad’"s first Emmy for best drama -- and season five part two, which wraps up on Sunday. That’s why I’ve composed this list of the biggest heart attack-inducing moments (at least so far) from the final season of "Breaking Bad."

These are the top 10, pre-finale gut punches of a final "Breaking Bad" season that practically never stopped knocking the wind out of us.

When Walt kept cranking up that dial, and every metallic object in the police evidence room started to fly like something straight out of a scene from "Poltergeist," and Walt still would not stop cranking up that dial even though Jesse specifically said, “Mr. White, let’s get out of here” -- well, let’s just say that we all got a little agitated. But everything worked out. Because as that old saying goes: Yeah, bitch. Magnets.

In an episode that felt like a 60-minute panic attack, the phone call Walt made to Skyler was fascinating for all of its emotional pendulum swings. But part of the reason some viewers didn’t initially grasp that Walt’s words were (at least partially) spoken to exonerate his wife was because we were all very busy flipping out. Walt spewed venom while keeping Holly in his custody, a shaky Skyler cried and gasped for breath with her husband’s blood still on her sweater, and then Marie, officially aware that Hank was dead, just started wailing. Forget heart attack -- this was more like a heartbreak attack.

After Jesse’s ricin realization and pounding of Saul Goodman, he flew into the Whites’ driveway, thrust his way into their house and  -- sweaty, enraged, utterly out of his head -- doused the joint in gasoline while the sounds of his crazed screams and a throbbing techno-drum beat served as a soundtrack to his mental breakdown. So, you know, typical Sunday night.

Just like Jesse, Mike Ehrmentraut had an opportunity to take some money and run. And it really seemed like he was going to do just that, until he refused to give Walt the names of his imprisoned Gus Fring associates and (rightly) chastised Walt for letting his ego guide his actions. Then Mike got in his car, zipped open his duffel bag, realized the gun that was in there before was missing, and then -- No! He’s been shot! Why, Walt? Why?!?!

For some people, the heart attack moment occurred when Walt and Hank finally had their big face-off in Hank’s garage. For me, it came just after that, at the beginning of the very next episode, when Walt calmly walked to his car, then kicked into panicked gear, desperate to dial Skyler or drive to the car wash before Hank -- visibly using his cell phone at the same time -- could get to her first. Just thinking about this scene makes me feel like I’m simultaneously late for a meeting, trying to file four stories on deadline and running away from a mountain lion.

Jesse, prisoner of Todd and the Aryan Nation crew, managed to unlock his handcuffs with a paper clip, climb on top of an upside down bucket, leap up and catch the bars of a metal door several feet above him, slide its lock and *then* open that door and pull himself out. Then all he had to was run for his life and climb a barbed wire fence that almost, almost led to his glorious freedom. That didn’t happen. But you know what did? Heart attack.

This was no prolonged agony. When Todd took one look at the most unthreatening witness to a train heist in the history of train heist witnesses and immediately shot that kid dead, the only way to respond was with a sudden gasp, followed by a hand placed over a mouth wide open in shock.

3. Hank’s toilet epiphany (“Gliding Over All”)

Unlike Hank’s unfortunate death, which everyone except Walter White pretty much saw coming, ASAC Schrader’s discovery of that incriminating copy of "Leaves of Grass" was a season five part one curveball cliffhanger that made "Breaking Bad" fans insane with anticipation for almost a year. This was the rare “good” "Breaking Bad" heart attack, the one that made you scream at the grown man sitting on the commode, “A-HA! You finally got him!”

Technically, these are two separate incidents, but they were part of a single scene in which Walt and Skyler grappled with a very sharp piece of cutlery and nearly killed each other, Walt Jr. called the cops on his own dad and an innocent baby was snatched away by her father, leaving that baby’s mother to fall to her knees in the middle of the street. Seriously: I don’t have asthma, but where is my inhaler?

It’s entirely possible that something will happen in Sunday’s episode that trumps everything on this list and catapults itself straight to No. 1. But until that happens, the shoot-out that ended episode 13 of season five stays on top for several reasons. One: it immediately followed Walt’s almost-arrest, the culmination of nearly five seasons of wondering whether Heisenberg would ever be apprehended. Two: Because the gunfire was completely insane and left us wondering who would be left standing. Three: Because, most importantly, it stopped in mid-action, making this the scene that not only gave us a heart attack, but also kept us in cardiac arrest for a full week until we found out what happened next, and immediately proceeded to our next heart attack. Ah, "Breaking Bad." You’ll always be the one who knocks … and then knocks us on our asses. And we’ll miss you terribly for that.