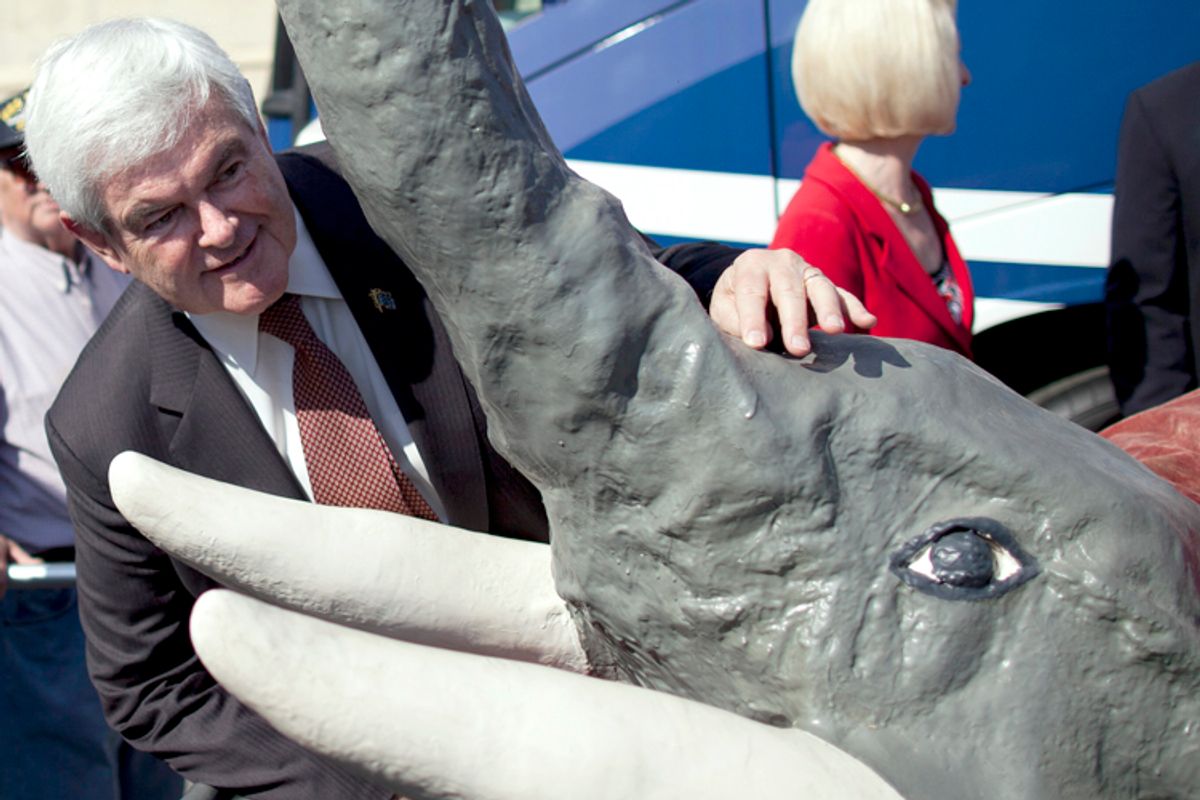 Congratulations, CNN, you managed to hire Newt Gingrich, one of America's most beloved historian-grifters. Now he's your problem. The new "Crossfire" has only just begun, and CNN is already trying to explain how and why Gingrich is exempted from the cable news channel's ethics policies.

When CNN relaunched their storied professional arguing program this year, they decided the show would be hosted, half of the time, by former Obama campaign (and administration) communications professional Stephanie Cutter, and former Republican presidential candidate and Speaker of the House Newt Gingrich. Unlike most past Crossfire hosts, Cutter and Gingrich aren't professional journalists or commentators. Their work experience is in politics itself, not political media. They are explicit partisans, in other words. That makes for bad TV, obviously, but it also makes for bad public relations, when the professional pols continue to act like professional pols, because that is what they are. In Stephanie Cutter's case, that means assisting the White House in its attempt to convince the press and the public that Larry Summers is a great man who would be a great Fed Chair. In Gingrich's case it means grifting everyone all the time.

After leaving Congress in disgrace, Gingrich spent years slowly and carefully repairing his image -- he became Newt Gingrich, Ideas Man -- and cashing in on that image as much as possible. Few were better at recognizing and taking advantage of the fact that the conservative movement is a self-perpetuating fundraising machine. Gingrich Inc. pulled in $100 million doing almost nothing of concrete value for anyone but Newt. Speeches, consulting, publishing, filmmaking, and fundraising-for-the-sake of fundraising made Gingrich a rich man.

Gingrich's 2012 race was pretty obviously intended, at least initially, to boost his profile and hence his earning ability, but he seems to have gotten a bit full of himself and taken it too far, ending up deep in debt and forced to shutter some of his lucrative businesses. He's climbing back out of that hole and reestablishing Newt Inc., and CNN is apparently willing to rewrite its own ethics guidelines in order to help him get back to doing what he does best, which is extracting money from suckers.

Gingrich's current con is the American Legacy Political Action Committee, which Gingrich founded in 2010. Gingrich is still signing his name to their fundraising pitches. Here's the (very simple) con: The PAC raises a bunch of money and gives it to a shady communications shop called InfoCision. InfoCision is a telemarketing firm that raises money for conservative nonprofits and then keeps most of the money. (Do you see how this whole conservative ecosystem works?) Gingrich's relationship with InfoCision goes back to his time as Speaker. For this election cycle, through July, American Legacy PAC has raised $1.4 million and given $1.25 million to InfoCision, according to David Corn and Andy Kroll.

That's the scheme. Here's the conflict of interest: This Gingrich-founded PAC has also given money to some politicians, including Rand Paul. Gingrich has hosted Paul on Crossfire, without disclosing that his PAC donated to him. That is a violation of CNN's ethics policy. So CNN is just sort of changing their policy, according to this statement from CNN Executive Vice President of News Standards and Practices Rick Davis:

We are clarifying the policy and making it clear Newt Gingrich is not in violation. The policy: If a Crossfire co-host has made a financial contribution to a politician who appears on the program or is the focus of the program, disclosure is not required during the show since the co-host's political support is obvious by his or her point of view expressed on the program.

This "clarification" is, as MediaMatters notes, "at odds" with what Davis said less than a month ago:

In an interview with Media Matters earlier this month, Davis said that if Gingrich, who serves as honorary co-chair for the American Legacy PAC, "is helping fund a candidate and that candidate's on the show, or being discussed on the show, of course he'll disclose that. Disclosure is important when it's relevant."

Here's the question for CNN: Is having Newt Gingrich as a television host so valuable to your network that it's worth rewriting ethics rules and tacitly sanctioning his shady fundraising practices? Does be bring that much "value" to your "brand"? He's famous, sure, and sometimes compelling television, but so are lots of other conservatives, and some of those conservatives might not be actively swindling people right this very second.

Considering Gingrich's longtime willingness to go on TV for free -- one of the few things he'll do for free, it seems -- why ruin your big cable news corporation's credibility by making him an employee?