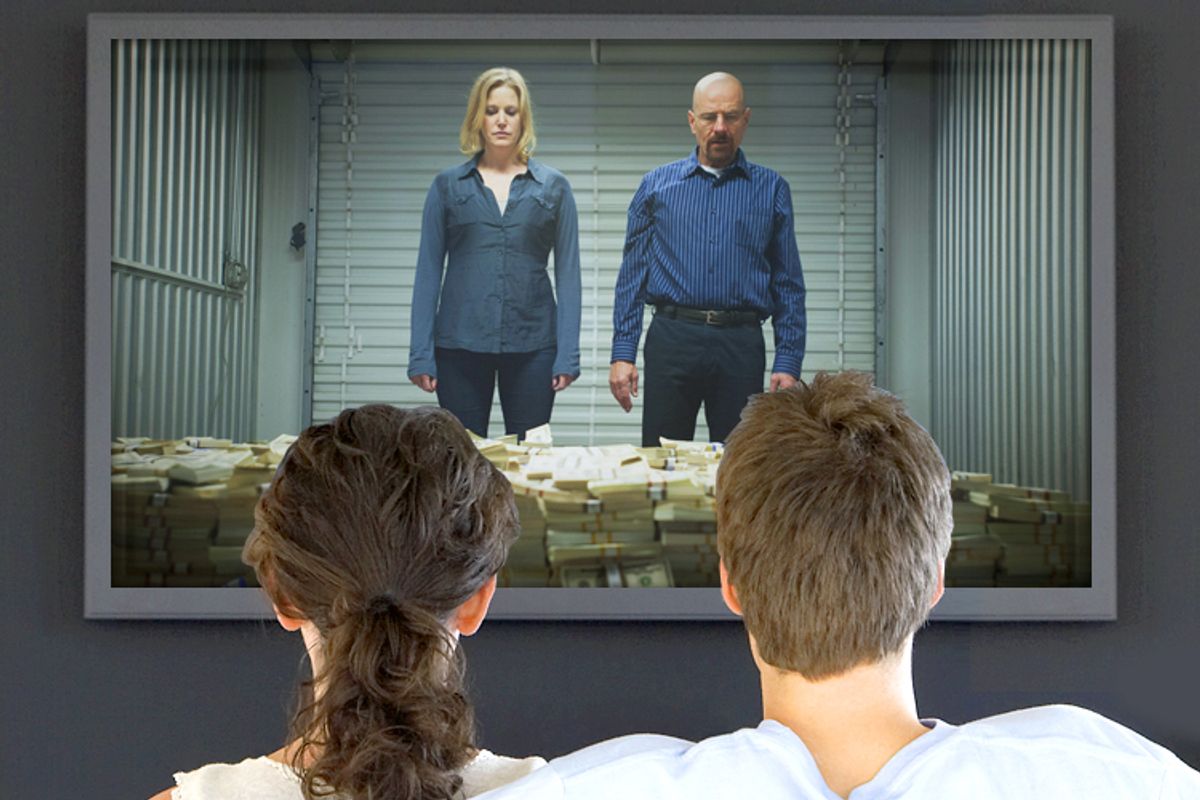 I’m one of those young people: the ones who don’t “get” cable TV, and who certainly aren’t paying for it. Instead, we exist on a diet fueled by our parents’ Netflix accounts, shared passwords and (so I’ve heard) illegal streaming sites. Hits like "Orange Is the New Black," only available on Netflix, furthered our contention not only that we aren’t missing out on anything, but that the Internet is where the most exciting television is happening. And less important to us than what night shows air is when they’ll be available to watch online.

But when Heisenberg finally puts his machine gun to use Sunday night, there’s no way I’m waiting until the next morning to watch it all go down. The show’s ratings suggest that most fans feel the same.

No show has ever increased its audience exponentially in its final season, writes BuzzFeed’s Kate Aurthur, the way "Breaking Bad" has. The premiere of the most recent season (technically, its second half) attracted a record-setting 5.9 million viewers, double the numbers hit by Season 5’s first episode. Even though it aired opposite the Emmys, "Breaking Bad's" penultimate episode set a ratings record for the show, with 6.6. million viewers tuning in to watch it live. That’s not a lot of people on its own, but it marks an unprecedented victory for live television.

That’s because the show’s can’t-miss status comes at a time when fans are no longer choosing to watch new episodes of shows the night they air. Instead, they’re time-shifting: skipping the commercials and the need to be somewhere at a set time in favor of DVRs and the easy availability of streaming services. Those who take issue with doomsday prophecies of the end of cable television, meanwhile, argue that sports are the thing that will keep it going. The Atlantic’s Derek Thompson champions this line of reasoning, arguing that even if people aren’t paying to see scripted shows as they air, plenty are still willing to cough up the cash to watch big games live. And there are many more sports fans than people who care about what’s going to happen on "Mad Men."

But if the Internet normally works to steal away television’s audience, the relationship between the two mediums is more complex when it comes to "Breaking Bad." While fans last Sunday were finding out how the final pieces of the show’s end game are beginning to fit together, 325,000 tweets documented its every twist and turn. With its relatively small audience, it wasn't setting any Twitter records (that honor belongs to "Pretty Little Liars," which at full force is capable of generating 70,000 tweets per minute), and it wasn’t even the most widely discussed show on social media that night. But the tweets that were sent out were distinctly spoiler-heavy. When it came to the Emmys, Twitter was a shortcut for finding out which TV shows collected the most awards without having to sit through the three-hour slog of a ceremony. For anyone still racing to catch up on "Breaking Bad’s" backlog, it was the most dangerous place on the Internet.

Those unfortunate souls left behind as the finale approaches will be able take some solace in Netflix’s “Spoiler Foiler,” which censors any revelatory tweets about the show with thick black bars. Netflix developed the app as a service to its British customers, who have to wait hours -- hours! -- after new episodes have been aired in the U.S. before they become available in the U.K. That it’s only been rolled out for this one show underscores the anxiety that next-day viewing in this case inspires.

The feature is also a smart way for Netflix to acknowledge its secondary role in "Breaking Bad’s" success. By allowing new fans to catch up quickly, as Variety argues, it’s likely in large part responsible for the show’s recent ratings explosion -- more so, I’d venture, than AMC’s attempts at cultivating a shared-screen experience through its Story Sync feature. Unlike other instances where the streaming service has managed to make itself a destination, though, here it serves only to direct viewers back to “live” TV.

I didn’t need Nielsen’s numbers to know that something special’s been going on this season. After inviting myself over to a friend’s cable-equipped apartment to watch "Breaking Bad’s" premiere, I started showing up, instead, to a bar in Park Slope. They also have cable, along with “Schraderbrau” on tap and, for the past several weeks, have been packed to capacity. That’s right -- people have actually been standing through the entire hour, commercials and all.

“Doesn’t anyone watch baseball anymore?” a perplexed passerby shouted at the tense crowd during a particularly excruciating moment in "Ozymandias," the show’s third-from-last-episode. I can’t speak to that, but I can say there was zero multitasking going on during that week’s final 10 minutes. And when (spoiler alert) Todd’s uncles arrived to ruin Hank’s short-lived victory, the room divided into cheers, moans and hisses of derision at those who had the nerve to be cheering. It was the first time I truly understood how it must feel to be a sports fan.

Some things, like a big game or, yes, the season finale of "Breaking Bad," need to be experienced as they happen. If sports, as Thompson writes, are “the final bastion of must-see-live-TV,” then we’re coming up on Super Bowl Sunday.