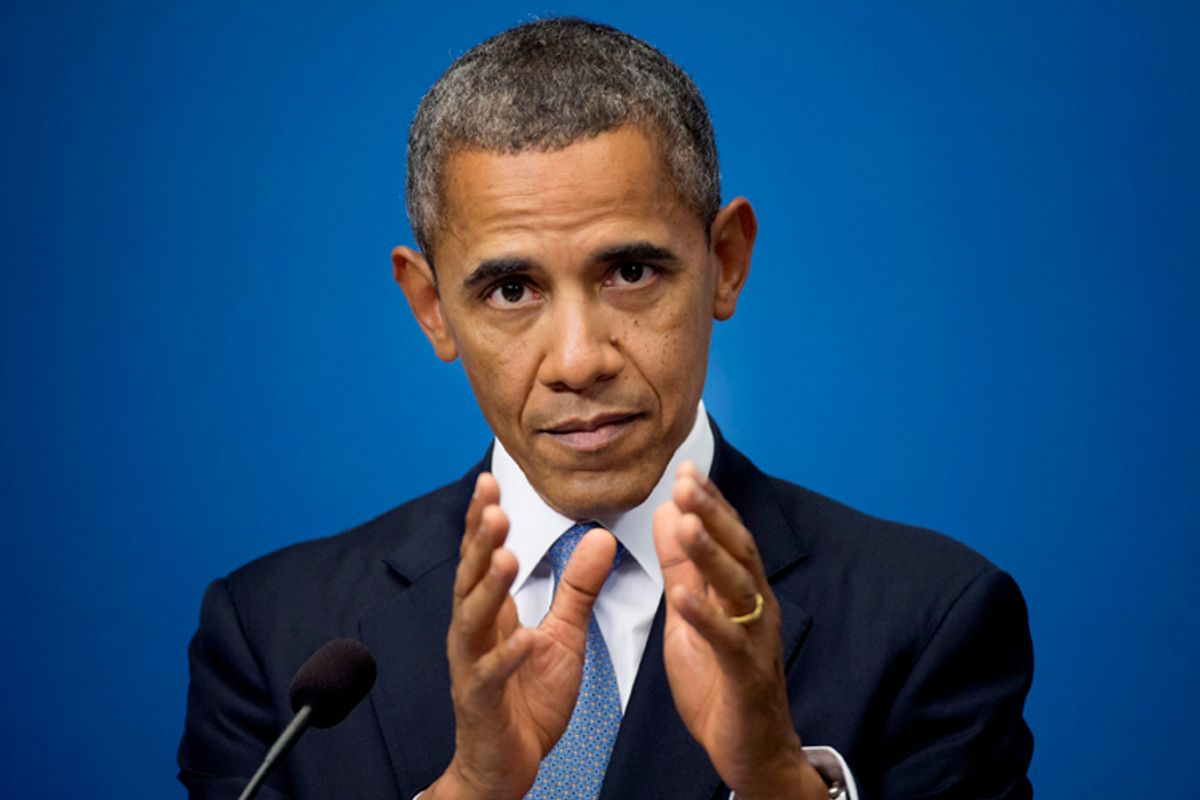 WASHINGTON (AP) -- This time, President Barack Obama says, he's not budging. This is the confrontational Obama, the "Make my day" president, betting Republicans blink to avoid a government shutdown or a first-ever default of the nation's debts.

It's a proposition not without risk and one with a history of last-minute accommodations on both sides. Brinkmanship between Obama and congressional Republicans has often stopped at the precipice's edge.

In this round, however, the president and his aides maintain that when it comes to raising the government's borrowing authority and meeting its debt obligations, there's no bargaining.

"The entire world looks to us to make sure that the world economy is stable. You don't mess with that," Obama said Thursday. "And that's why I will not negotiate on anything when it comes to the full faith and credit of the United States of America."

Still, House Speaker John Boehner says a debt hike must be linked to budget cuts and other programmatic changes.

"The president says, `I'm not going to negotiate,'" Boehner said. "Well, I'm sorry, but it just doesn't work that way."

Obama's stance is rooted in experience, politics and a desire to protect himself from similar demands in the remaining three years of his presidency.

Obama advisers note that past negotiations have not yielded grand bargains and that the mere threat of default in 2011 rattled the economy, causing a downgrade in U.S. credit. Talks earlier this year to avoid automatic spending cuts known as sequestration also failed.

Obama aides also note that Boehner himself eight months ago declared an end to negotiations with Obama, favoring the regular legislative process instead.

That process has proved messy for the GOP and senior White House aides insist that in a standoff, Republicans will be perceived as the unreasonable party. And the White House is convinced any concession would place the president in the position of having to bargain again and again when the next debt ceiling looms.

"Every poll I've seen suggests that while no one escapes cleanly from a shutdown, the GOP would bear the brunt," former senior White House counselor and Obama adviser David Axelrod said. "The bigger danger for the president is to put himself in a position to be constantly held hostage. First they want an arm. Then they want a leg. It's unsustainable."

The likelihood of a shutdown Oct. 1 and the threat of a credit default in the ensuing weeks have mounted as conservative Republicans push to use a stopgap spending bill and an increase in the debt ceiling as leverage against Obama's 3-year-old health care law.

House Republican leaders, meanwhile, want to attach other provisions to the debt ceiling, including approval of the Keystone XL pipeline and provisions blocking pollution regulations.

"There's no need for conversations," Reid said. "We've spoken loudly and clearly, and we have the support of the president of the United States. And that's pretty good."

The Pew Research Center, however, found nearly 6 out of 10 Americans want politicians they side with to be more willing to engage in talks. And the public split about evenly in the Pew poll on who would be responsible if the government shut down, with 39 percent blaming Republicans and 36 percent Obama and much of the rest blaming both.

"The president may not be playing this just for this set and this match," said Patrick Griffin, the White House legislative director under President Bill Clinton. "As his tenure goes on and his legacy looms larger, he might not be as poll sensitive as he might be otherwise."

White House aides say Obama is still willing to negotiate over a long-term spending deal, just not as part of raising the debt ceiling. But the opportunity for that could be short-lived, too. The Senate version of the short-term spending bill would set up another possible government shutdown as soon as Nov. 16.

What's more, lines in the sand have blurred before.

Obama ran for re-election vowing to increase taxes on individuals making more than $200,000. Republicans insisted they would not raise taxes at all. In the end, both settled on a hike on incomes above $400,000. Most recently, Obama altered course on Syria, at first determined to launch missile strikes against its regime, then seeking congressional support before taking a diplomatic path aimed at destroying Syria's chemical stockpile.

The White House also sees the current showdown as an opportunity to cast the Republican Party in the image of Sen. Ted Cruz of Texas, a leader in the effort to kill Obama's health care law.

"They have allowed Ted Cruz to be their face, write their charter, and steer their ship," said senior White House adviser Dan Pfeiffer. "That is a decision that has real consequences for how the American people view the Republican Party as we head into this debate."

Still, if the White House is eager to stitch Cruz's name to the Republican Party banner, many Senate Republicans were doing their best to distance themselves from the Texan and his aggressive tactics.

Indeed, as much as Republicans dislike the health care law, many Republicans argue that seeking to kill it is fruitless as long as Obama is president and Democrats control the Senate.