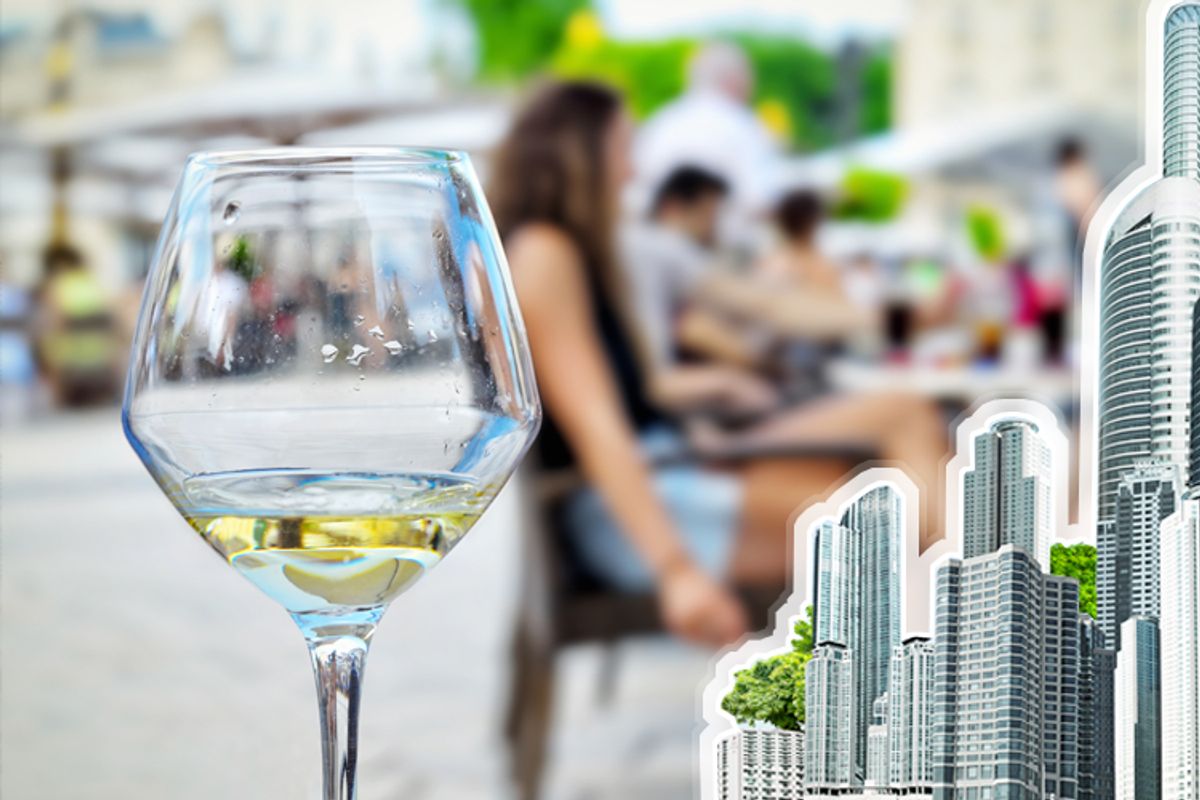 Parking lots and plots of bare earth line much of Beale Street, on the south side of downtown Memphis. The landscape is a familiar one. Hollowed out by population flight and urban renewal, it recalls parts of downtown Jackson, Cleveland or Tulsa.

Cross South Fourth Street, though, and it’s as if you’ve stepped back in time. Striped awnings shelter sidewalk tables from the Tennessee sun. Neon signs jut from the walls of squat brick buildings. King's Palace Cafe. The Blues Hall Juke Joint. Whatever the time of day, live music streams from the doorways. This is a familiar scene too: It's the dazzling American streetscape of the 1920s.

One big difference? The 4 million people who visited Beale Street in 2012 could drink their bourbon, scotch and beer in the street. In fact, they are encouraged to do so.

It's one of many sections of American cities where open container laws, once gospel, have been reconsidered. For struggling downtowns, relaxed alcohol laws have become a foundational requirement for vibrant nightlife. Cities from Lincoln to Louisville have built their own Beale Streets, luring crowds with the promise of sidewalk beers and curbside whiskeys. Is it the beginning of a movement against America's puritanical public drinking policy, or just another way to make money?

Consider the Beale Street model. In the early 20th century, this was one of the most vibrant black neighborhoods in the South, famed for its live blues music. By the 1960s, desegregation and flight had dimmed the lights, and a racially charged urban renewal program finished the job. Memphis demolished 374 buildings, evicted 300 families, and reduced the resident population to zero.

What you see today on Beale Street, then, is a pale imitation of what once was. When the city began to rehabilitate the area, in the late 1970s, only one store remained. Building a street from scratch was a big job, and one of the city's first steps was to procure Beale Street an exemption from two state liquor laws: closing time and open container.

It's obvious to anyone who has ever traveled to Europe, South America or Asia that booze is a surefire way to activate public space. From Cartagena to Kyoto, summer nights flood parks and plazas with people preparing for a night on the town. As Bunny Colvin, "The Wire’s" radical Baltimore police commander, once said: “The corner is what it was and always will be: the poor man's lounge. It's where a man wants to be on a hot summer's night. It's cheaper than a bar, and you can catch a little breeze and watch the girls go by."

In the U.S., the enticing social effect of alcohol has led to bans, not endorsements. What might pass for hanging out on the banks of the Spree has long been called loitering on Boston Common.

For American cities seeking to enliven their downtowns, though, drink is increasingly seen as a crucial ally. No one can say how important the open container exemption is to Beale Street's success, but the feature has been widely imitated. Louisville's 4th Street Live!, a downtown revitalization effort with a more corporate feel, was exempted from Kentucky's open container law in 2003 and opened in 2004. The eight blocks of Kansas City's Power & Light District (like Fourth Street, developed by the Baltimore-based Cordish company) operate under a similar law. The Fort Worth Stockyards allow open containers, as does part of downtown Mobile, Ala.

Ohio state Sen. Eric Kearney, who has sponsored legislation that would allow cities like Cleveland and Columbus to create their own alcohol-friendly zones, says it's an economic opportunity. "Particularly in Ohio cities whose downtowns have been struggling a little bit, this is a shot in the arm," Kearney told me. Oktoberfest Zinzinnati, for example, drew half a million people to five blocks of Cincinnati last week. Could the city attract crowds like that year round? Kearney mentioned Beale Street as a model. "That's what we're trying to imitate -- that kind of energy, that type of environment."

Often, a new alcohol law goes hand in hand with a new urban entertainment district, a concept that critics say embodies a big misunderstanding about what makes cities attractive. "The model suggests that city life is nothing more than a selection of personal consumption experiences," Will Doig wrote in this space last year. Guided by developers in search of marquee clients like the Hard Rock Cafe, anchored by megalithic arenas and streets manicured like movie sets, the entertainment district experience is too often like getting drunk at the mall. Some, like KC Power & Light, have struggled to pay the bills.

Are these entertainment districts responsible for liberating our public space? Emphatically, the answer is no. The street space of entertainment districts is actually more restrictive. At 4th Street Live!, the David Stern-esque dress code (yes, a street can have a dress code) forbids sleeveless shirts, sweat suits, "excessively long shirts," exposed undergarments, and sunglasses after 9 p.m. On the subject of alcohol, too, many of the best-known entertainment districts are not so much liberating the street for public use as turning it over to the bars and restaurants that line the sidewalk. It’s often required that revelers purchase their drinks from local concessionaires.

And yet, there may be hope for New Orleans-style normalization of alcohol in U.S. cities. Erie, Pa., has for the last decade run an entertainment district that stretches the definition of the term: It's 70 blocks, which in this small industrial city constitutes a large swath of downtown. "It was a key to helping us with the revitalization of downtown Erie," says John Buchna, the CEO of the Downtown Erie Partnership. "A lot of people are coming downtown who haven't been downtown for a while." The new open container law, and the socializing it produces, has helped. It's a system closer in style to Savannah, Ga., Butte, Mont., or Sonoma, Calif., all of which allow open containers regardless of their provenance.

The entertainment district may be weird, lame or fun, depending on your taste, but it’s currently functioning as a segue toward bigger, more normal public spaces with fewer alcohol restrictions. After all, not every city has the makings of a grown-up fun zone: two abandoned blocks of a historic district, like Memphis, an unfinished downtown galleria, like Louisville, a bygone stockyards, like Fort Worth. While centrally planned nightlife may have boosted the open container trend, more organic downtown districts in Alabama, Ohio and elsewhere are now following suit. All candidates in the New York City mayoral race endorsed drinking on stoops.

How did drink vanish from the streets and squares of the American city in the first place? Partly, a cultural sea change is accountable: The percentage of alcohol consumed in the American home or at private parties grew steadily over the 20th century. But the laws against open containers did not prompt that transition. Neither are they, as you might think, a legacy of prohibition. And they have nothing to do with America's ancient blue laws.

When New York City banned open containers from its streets in 1979, lawmakers were quite explicit about the law's intent: "We do not recklessly expect the police to give a summons to a Con Ed worker having a beer with his lunch," a sponsor of the bill told the Times. "This is for those young hoodlums with wine bottles who harass our women and intimidate our senior citizens."

But even the most innocuous brown-bagged brew soon found itself in the cross hairs of the broken window theory of policing, a symbol of quality-of-life degradation on par with the overgrown lot and the abandoned car. That judgment has been reflected in police data. According to figures assembled by Harry Levine, a professor at Queens College at CUNY, the number of summonses issued in New York City – more for open container than for any other offense – has more than tripled since 1993. In 2010, the NYPD issued over 140,000 summonses for open container out of 578,000; in 1993, the department had issued 160,000 summonses total. Of the 15 precincts with the most open container summonses per person in 2010, 12 were majority black and Latino. Elsewhere, the racial bias in alcohol ticketing has been considered reason enough to reform the law. In 2001, the New Orleans City Council repealed the city’s open container law, which had been enforced with an 80-20 racial bias, after a black man carrying a beer was shot and killed by police.

It’s tempting to draw a connection between these policing statistics and the restrictive dress codes of urban entertainment districts. But open container laws aren’t motivated by race so much as by the desire to establish control. That rules on drinking outside have been relaxed in cities as diverse as Mobile, Ala., Erie, Penn., and soon, it seems, New York City, indicates that cities are ready to loosen their legal hold on harmless behavior, and restore some personal independence to urban life.

When I told Janann Sherman, a retired professor of history at the University of Memphis and author of the book "Beale Street," that imitators of the famous stretch had instituted dress codes, she groaned.

“That's one of the best things about Beale Street,” she told me. “You will go down there on a Saturday night and see anything and everything: fur, diamonds, plaid shirts and flip-flops.”

Like a city itself, the fewer rules are necessary, the better.