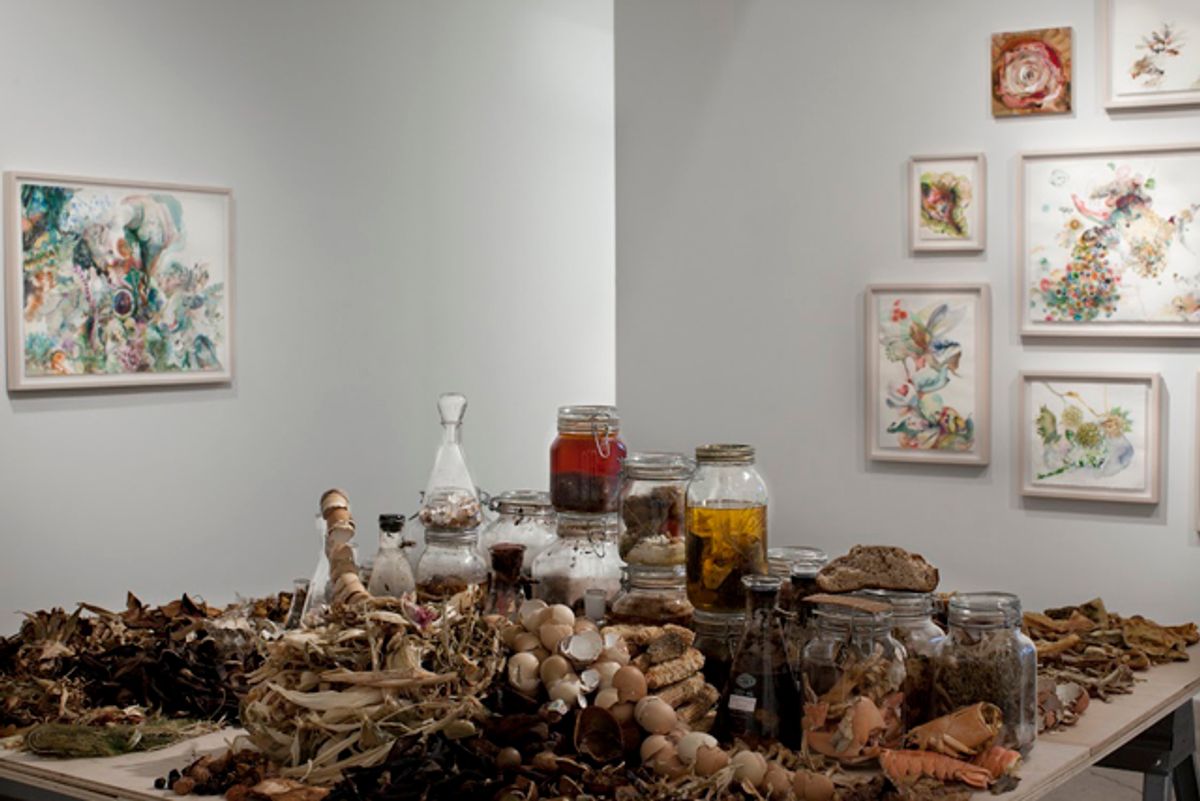 It wasn’t easy being a female Victorian scientist. Even if you got a place to work beyond your home, it was unlikely you would ever receive an academic position, or any sort of wide recognition for laboratory success. It’s this “in-betweenness” that has fascinated artist Emilie Clark and prompted her to develop a series of exhibitions called Sweet Corruption. It’s also involved her saving her family’s food waste for a year and putting it on display. The latest in the Sweet Corruption series is opening next month at theNevada Museum of Art, and follows an exhibition at the Lynden Sculpture Garden in Milwaukee earlier this year and one in 2012 at Morgan Lehman Gallery. All have involved not just researching Victorian scientists, but also using this mode of practice as a way to go out into the field on her own and turn her studio into something of a laboratory. The New York-based artist’s exhibitions, while including her detailed swirling watercolors, also involve installations with microscopes, jarred specimens, and hands-on research stations.

“One of the things that excites me about working in the way that I do is that I think that if done seriously, artists who work in close dialogue with science have the ability to create a kind of third space — a space that is not strictly science and not strictly art,” she told Hyperallergic. “The art can teach the viewer how to consider the science from an alternative perspective, while also teaching how art can occupy a place of knowledge and communicate through its particular media.” For the Nevada exhibition, she’s focusing on the work of Ellen H. Richards, a 19th century chemist who was the first female student at MIT, and was especially focused on sanitary engineering. She also introduced the term ‘ecology,’ literally meaning “Earth’s households.” Richards was especially curious about the idea of controlling different “parts” contained in air, water, and food into a whole.

“Transformation and world building is one of the underlying connections across all of my projects,” Clark explained. “The practices of these women and mine involve careful testing, sustained empirical inquiry, structured interaction with daily life, and ultimately world building.” Another interesting aspect of the Victorian female scientists for Clark is the language they employed to create analogies for the ideas they were working with.

“To describe their work they used the metaphors that were most familiar to them — like sewing notions, clothing, food,” Clark stated. “And yes, while some of the language is concerned with maintaining expectations of Victorian femininity, the texts of all of the women I’ve worked with reveal that they are grasping for traction at the edges of science, being quietly radical in a world where their aspirations could only be seen as aberrant, all the while making significant discoveries in their respective fields.”

As to why Clark saved all those food scraps and is including them in the exhibition? Richards had an especially keen eye to what the science of a meal could be. Inspired by Walt Whitman’s poem “This Compost,” which connects decay of vegetation to death, Clark drew her project’s title from this line: “It grows such sweet things out of such corruptions.” “I love this use of corruption — nothing to do with our more common use of it in terms of power and politics, but instead, a breaking down, an endless change of ‘the whole,’ the form,” she explained. “In reading the poem I had a sudden clarity that my art process was the compost of my life. Preserving my family’s food waste, became this daily practice that both provided visual material of study, and that insisted on making me aware of the productive nature of corruption and the interconnectivity of all things.”

Emilie Clark: Sweet Corruptions is at the Nevada Museum of Art in Reno from October 5 to March 9.