We'll be rooting for justice because there's so little of it: Jamie Dimon walks free but whistleblowers face prison 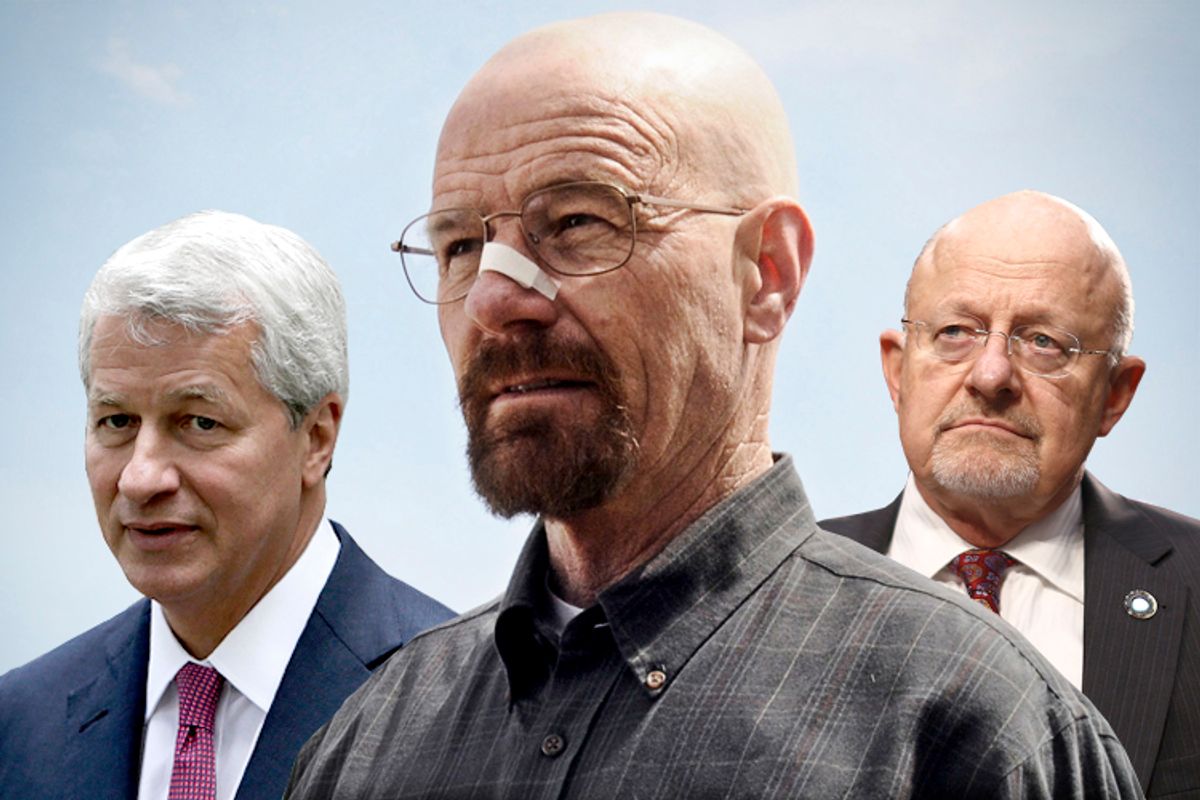 You may be aswim with doubts about the real-world efficacy of punishment, the usefulness of the “war on drugs” and the morality of the death penalty, but I’m betting you expect to see Walter White die in the final episode of “Breaking Bad.” I’m betting you even need that.

Maybe it’s a little easier because Walt is dying from cancer anyway. He’s a pre-digested protein. He’ll zoom through Death’s intestines like a kid on a water park slide.

We all have strong ideas about the fates of Walt and the people around him partly because – here in real life -- crime and punishment seem more disjointed from one another than ever before. You’re more likely to be prosecuted for lying to Congress about steroids and strikeouts than for bald-faced perjury about the wholesale government espionage directed at all of its citizens. You can run a major investment bank using the handbook from a pirate ship and never face criminal indictment. Blow the whistle about war crimes, and you could be looking at serious prison time.

And it’s not just the crimes. There’s something in Walt’s self-righteous tone and his indifference to the little people who get hurt that we recognize from today’s news. In 2010, Charlie Munger, number two guy at Berkshire Hathaway, was asked if bailout money should have gone to beleaguered homeowners instead of to big banks. His answer: “At a certain place, you’ve got to say to people: Suck it in and cope, Buddy. Suck it in and cope.” And this week AIG CEO Robert Benmosche told the Wall Street Journal the public caterwauling about bonuses for executives at bailed-out banks was “just as bad and just as wrong” as the lynchings decades ago in the Deep South.

And to whom did Walt compare himself in one of his famous rants to his wife Skyler: “Do you know what would happen if I suddenly decided to stop going into work? A business big enough that it could be listed on the NASDAQ goes belly up. “

If all he had ever done was cook meth, with occasional picaresque side adventures, we’d have a different attitude. We found ourselves nodding when Mike Ehrmantraut, that saturnine soul of pragmatism, called Walt out:  “We had a good  thing, you stupid son of a bitch … You could have shut your mouth and cooked and made as much money as you would have ever needed. But no, you just had to blow it up! You and your pride and your ego, you just had to be the man! If you’d done your job, known your place, we’d all be fine right now.”

No attempt is made to conceal the Greek side of this story. A couple of episodes back, we saw Walt rolling that heavy black barrel of money across the desert. Sisyphus much? Sisyphus was a money-grubbing bastard, killing, deceiving, pitting one man against another. When Walt sent Jesse Pinkman to shoot the patsy chemist Gale, that was a real Sisyphus move.

As a rule, we use movies to dream and television, a home appliance, to sort out the details of our daily lives. That’s why there are so many shows  chronicling life at home, life with friends, life at work, week after week, for years and years. Even “Star Trek” was all about how to function in a large, diverse workplace.

So who is Walt to us? At the micro level, he’s that person – usually at  your job – whose selfish and ruinous choices never seem to come with a price. We all know a creep who’s been riding for a fall for what seems like forever. Fall already!

At a macro level, he’s a stand-in for all the Wall Street guys who crashed your 401(k) and were never punished. Even as the exhausted Walt trudges down to the road to perdition, Jamie Dimon – where do they get these names? – is flying high. The big cheese at JPMorgan Chase has survived a cascade of revelations about the bank's fraudulent practices and shoddy bookkeeping. And when I say “survived,” I mean that not only does Dimon face no prosecution but also that he has been re-upped for his job as CEO and chairman. He even got to finish out his term on the board of the Federal Reserve Bank of New York after his bank, in the London Whale imbroglio, pulled the wool over the eyes of regulators – you know, like the Federal Reserve Bank of New York.

These days Dimon and his bank are in the fine-negotiating business. They paid almost a billion in the Whale case and they’ll pay billions more for their role in trafficking mortgage-backed securities. But in the five years since the Crash, none of the big bank CEOs has ever been indicted and none ever will be. Instead, the question that epitomized the shadiness of (to switch TV franchises) the Nucky Thompson era is now treated as the primary legitimate means of dealing with criminal behavior in the financial sector. “What’s it going to take to make this go away?”

Steven Cohen’s SAC Capital Advisors were indicted by the feds for insider trading that was – I quote from the indictment -- “substantial, pervasive, and on a scale without known precedent in the hedge fund industry.”

Cohen is reportedly in the process of negotiating a way out – a fine of $1 billion. In other words: “What’s it going to take to make this go away?” Remember when I said we use movies to dream? In Woody Allen’s “Blue Jasmine,” the Alec Baldwin hedge fund creep goes to prison and hangs himself there. That’s a dream.

On television, we have Walt, who recently said, “Jesse, you asked me once if I was in the meth business or the money business. Neither. I’m in the empire business.” Sound familiar? It’s not just the ruining of lives we hate. It’s that fervent, almost apostolic buy-in. Die for it, Walt! As Mort Sahl said, “You’ve gotta execute people. How else are they gonna learn?”

Jesse Pinkman, meanwhile, has provided us with a rich opportunity to explore our own attitudes about mercy, conscience and redemption. Nobody wants Jesse to die, even though he has done unconscionable things (see: murder of Gale). How do we explain this?

The easy way is to blame Walt and what Ernest Becker called “the spell cast by others – the nexus of unfreedom.” Falstaff could be speaking for Jesse when he says,  “I have forsworn his company hourly any time this two-and-twenty years, and yet I am bewitched with the rogue’s company. If the rascal hath not given me medicines to make me love him, I’ll be hanged.”

Blaming Walt is too easy. What has kept us spellbound is Jesse’s plausible series of transitions from street-rapping huckster to full partner in Walt’s empire to the rare publicly-beheld man in the vise-grip of contrition. We’ve watched a full-blown Augustinian awakening; and it turns out to mean something to us if it’s real, if it’s not crafted by handlers and read off a sheet at a dais.

The most obvious parallel is Chelsea Manning, who seems to have acted in conscience in turning classified documents over to Julian Assange and Wikileaks, with the common good very much in mind. And who – even though the court rejected the notion that Manning was trying to aid the enemy – was sentenced to 35 years in military prison.

Thirty-five years for telling the truth. Director of National Intelligence James Clapper – where do they get these names? – lied under oath when Sen. Ron Wyden asked him if the NSA collects data on Americans. “No.”  There’s not even a suggestion of seeking perjury charges against him.

In a much-discussed 2011 Atlantic article, neuroscientist David Eagleman argued that our current punishment system is anachronistically obsessed with volition and blame. Eagleman said human (mis)behavior is such a complex product of genetics, environment and actual brain diseases that affixing blame is impossible. Penalties should be based, he said, on scientific predictions of future behavior: the capacity for both improvement and repeat offenses.

Nah. Some atavistic part of us demands – at least occasionally – a more visceral display of justice. Given that, is it any wonder we’re crazy-excited about the end of “Breaking Bad?” Maybe just this once, the conscience-stricken man will crawl from the wreckage and the wicked man will fall.