The hatemonger next door 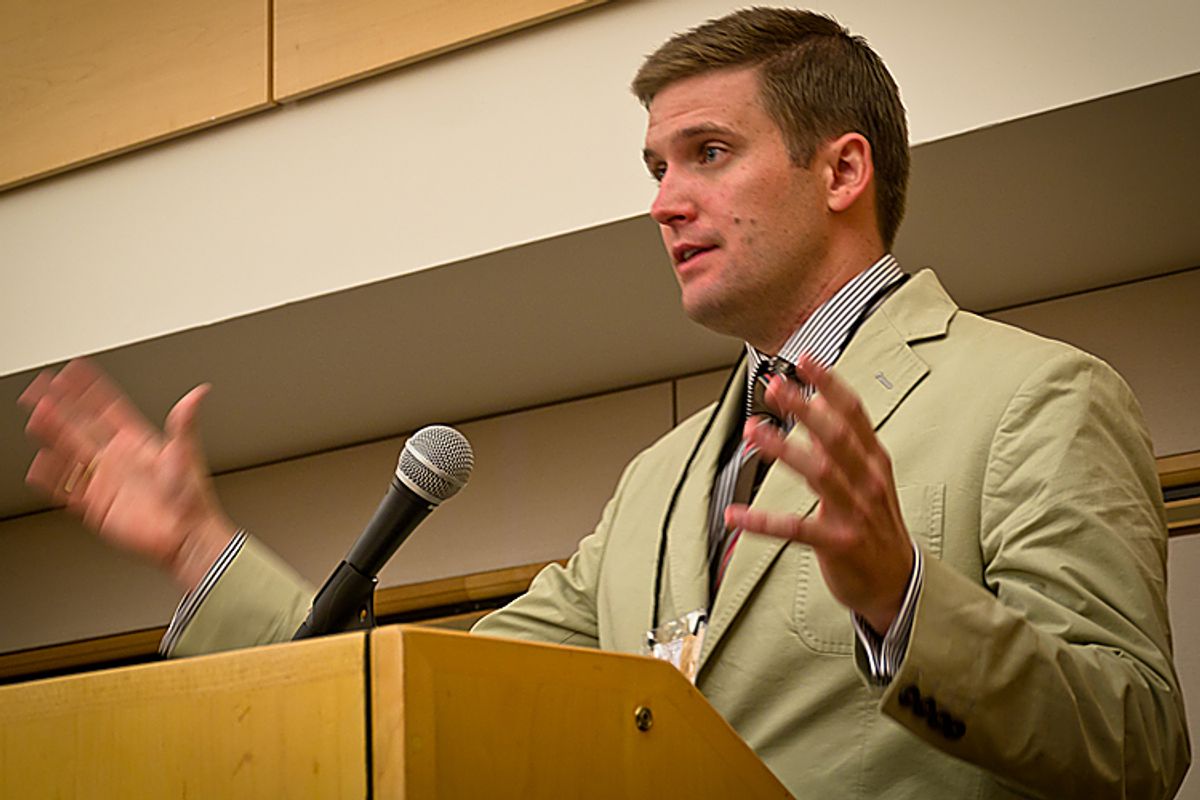 Richard Spencer sat sipping his chai latte at the Red Caboose, a train-themed coffee shop in downtown Whitefish, Mont. Clean-cut and restrained, he reminded me of a hundred outdoors-obsessed people I had known growing up here in the Flathead Valley, a resort area nestled in the shadows of Glacier National Park.

But Spencer’s tidy appearance is about more than his sense of propriety; it’s a recruitment tool. Spencer advocates for white separatism and he wants to shake his movement’s  reputation for brutality and backwardness.

“We have to look good,” Spencer said, adding that if his movement means ”being part of something that is crazed or ugly or vicious or just stupid, no one is going to want to be a part of it.” Those stereotypes of “redneck, tattooed, illiterate, no-teeth” people, Spencer said, are blocking his progress. Organizations that monitor domestic hate groups say it’s just this unthreatening approachability that makes Spencer so insidious.

Spencer says now, more than ever, it falls to people like him to be engaged and savvy if America is going to combat the growing threat of diversity. In particular, he’s irritated by the rise of U.S. minority births, which outnumbered white births for the first time in 2011.

“People have not really grasped that. Even if we shut off all immigration, the country is going to demographically undergo a tremendous transformation,” Spencer said. White people “need to start thinking about a new ethno-state that we would want to be a part of. This is not going to happen in the next election or in the next 10 years probably, but something in the future that would be for our great grandchildren.”

He’s open to founding a such an “ethno-state” in various locations in North America and even on the moon. Until then he's found a home in this corner of the mountain West, where I grew up. At present, 96 percent of the population in Whitefish’s Flathead County is white.

Under the auspices of his blandly named  National Policy Institute, Spencer is working to create an intellectual class of white separatists. The organization’s editorial unit publishes “scientifically-based” books like “Race Differences in Intelligence” and “The Perils of Diversity.” The group rejects the calls for violence, which appear in Internet chat rooms and public campaigns of hate. Spencer prefers a more professorial approach of publishing books and organizing conferences. “Our goal is to form an intellectual community around European nationalism,” he wrote in an email.

Spencer and I emailed and spoke on the phone over a period of four months before I’d asked to meet him. I was living in Washington, but was planning a trip back home. Over the phone, he’d seemed radical. In person, he was easier to take, in conversation he meandered from D.C. landmarks and comic books to the philosopher Friedrich Nietzsche. Then we crashed into eugenics.

“We are undergoing a sad process of degeneration,” he said, coming back to minority births in the U.S. “We will need to reverse it using the state and the government. You incentivize people with higher intelligence, you incentivize people who are healthy to have children. And it sounds terrible and nasty, but there would be a great use of contraception.”

He didn’t mean the government should encourage people to use birth control pills and condoms. He was advocating for some type of government-forced sterilization.

“They could still enjoy sex. You are not ruining their life,” Spencer said.

Until this moment, I was alarmed by the number of times I had found myself nodding along with him. Spencer waxed indignant at the conquest of big box stores. And his obsession with clean living sounded like the house rules of a college co-op. Yes, I knew his views, but they were easy to forget until you breached the topic. But the way he called for a white ethno-state and forced sterilization chilled me. I had never heard anyone speak so calmly about something so abhorrent.

Spencer’s finesse may owe to the fact that he’s familiar with the culture he has come to despise. He didn’t grow up in a like-minded household. In fact he jokes that his parents probably “don’t agree” with his work entirely. Spencer, who’s now 35, came to embrace his ideology as a student at the University of Virginia and then continued further out on the ideological spectrum. He then obtained a master’s degree in humanities from the University of Chicago.

After a brief stint as an English teacher in Virginia, Spencer landed a job as an assistant editor at American Conservative magazine and later joined Taki’s Magazine, a paleoconservative webzine that gives a conservative take on politics and popular culture.

The site has come under fire in the past for promoting racist content. During the Trayvon Martin trial, it published an article by John Derbyshire that instructed white parents to encourage their children to stay out of predominately black neighborhoods and warned them to scrutinize black politicians more than whites. (The conservative magazine National Review fired Derbyshire after he wrote this screed.)

In 2010, Spencer founded  AlternativeRight, a webzine that promotes “heretical perspectives on society and culture.”  The next year, he took over as the chairman of the National Policy Institute and moved it to Montana. He has since became a speaker to like-minded audiences and gives regular video addresses on his website.

Spencer has appeared at the National Press Club in Washington and hosted Web seminars with Jared Taylor, a similarly polished promoter of what Taylor calls “race-realism,” and South African Dan Roodt, who has spent his life promoting Afrikaner rights and culture.  Spencer has spoken before Youth for Western Civilization, a student group that once took credit for chalking “white pride” around the campus of Towson University in Maryland.

In October, Spencer is hosting an international conference called “After the Fall: The Future of Identity” at the Reagan Building in Washington.

With me, he was slow to unmask his feeling about race. But around sympathizers he has been forthright.

During the American Renaissance conference in April, Spencer said, “The ideal I advocate is the creation of a White Ethno-State on the North American continent,” an idea he called “perfectly feasible." During this speech he quoted Theodor Herzl, the founder of modern Zionism, and said, “I have a dream.”

He also said: "Today, in the public imagination, 'ethnic-cleansing' has been associated with civil war and mass murder (understandably so).  But this need not be the case.  1919 is a real example of successful ethnic redistribution — done by fiat, we should remember, but done peacefully." This is true if you consider setting the stage for World War II successful.

Rachel Carroll Rivas, the executive director of the Montana Human Rights Network, a group promoting cultural understanding and diversity in the state, says Spencer has stayed out of the community headlines, but says he shares the same goal as other white separatists in the area: to make the area all white. Spencer, she added, is waging a marketing campaign that repackages a classic brand of hate and selling it as a benign intellectual study. The Southern Poverty Law Center has classified Spencer as a leading academic racist.

For his part, Spencer rejects the notion that he is driven by hatred and considers “racist” a “slur word.” ("I guess 'academic racist' means: 'We don't like you ... but you're kinda smart.'  So, I guess I should take it as a compliment!” he wrote in an email.)

His website is evidence of his own duality. On the National Policy Institute’s home page, a photo of an attractive family gives the impression that the site is just another family values foundation, but if you click on the photo, a dark video depicting riots, shouting blacks and burning buildings unveils what NPI is really about.

The organization seeks to preserve the “heritage, identity and future of European people in the United States and Around the World.”  The “lesbians” and “Latinos” have advocates working for them, so why shouldn’t whites, Spencer asks in the video.

In the video, his voice is mixed over a metallic soundtrack as he intones, “As long as whites continue to avoid and deny their racial identity at a time when almost every other ethnic category is rediscovering and asserting its own, whites will have no chance to resist their disposition.”

This approach is far more sophisticated than that of the dozens of white supremacists who have moved to the Flathead Valley in recent years, as part of a shambolic effort to establish a white “ethno-state” there.

Spencer doesn’t interact much with the others in Montana. His supporters are younger and scattered around the world, from India to France. When I asked Spencer about the other like-minded crusaders in the region, he dismissed them as too overtly radical.

Spencer says he has no desire to advertise his views to his neighbors. “I don’t want to get in big disputes with anyone in Whitefish,” he says. “I would like this to be a place where I have a little bit of an anonymous status.”

“Our job is not to be reactionary in the sense that blacks commit a lot of crime or ‘we don’t like Mexican immigrants.’ All that stuff is real, but we don’t want to be any stupider than that and say, ‘Mussolini is my homeboy,’” Spencer says. “We need to be ahead of the game.”

Packing up, Spencer and I walked slowly out of the coffee shop together, returning to earlier conversations about Washington politics. As we shook hands and parted ways, I turned briefly to get a glimpse of him walking away. I couldn’t help being surprised that that same well-manicured man had just expressed so much hate.