"What is sexism, Alex": Close the "Jeopardy" gender gap! 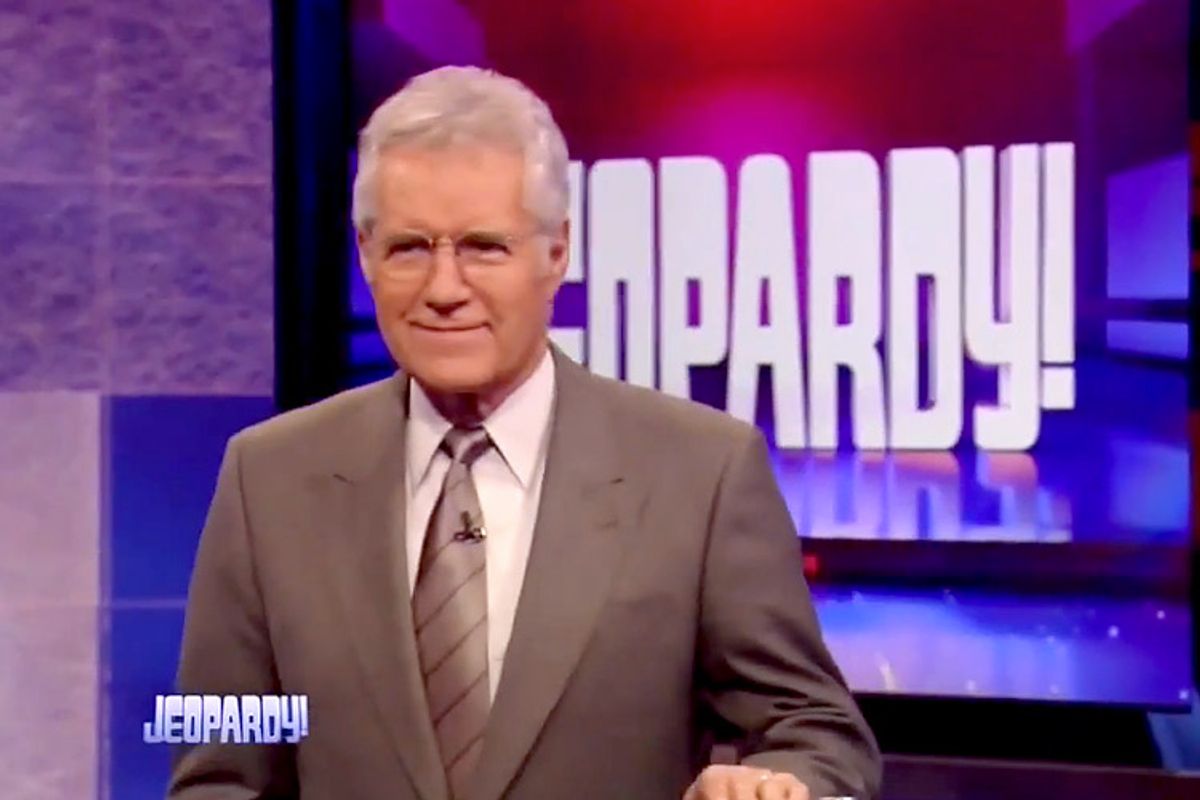 It was Georgia O’Keeffe that put me over the edge. "Are there no other female artists?!" I shouted at the TV, and not for the first time. Whenever an art category pops up on "Jeopardy!," there’s Georgia, the token woman.

The more I tuned in, the more it seemed that most "Jeopardy!" clues pertained to men, not just in art but across the board. As devotees know, contestants are provided the answers and must solve the clue by asking a question. Aside from the occasional "Who is Virginia Woolf?" or Amelia Earhart, maybe an Oprah Winfrey, I detected a distinctly male chord.

Don’t get me wrong. I worship "Jeopardy!" I TiVo "Jeopardy!" I dated a "Jeopardy!" champion. I am bereft on fall Fridays, when my local station airs Patriots All-Access football coverage, thus bouncing "Jeopardy!" to 2:07 a.m. I’ve been a fan since Art Fleming hosted in the 1960s. Twice I’ve been in the contestant pool — one among the thousands who qualify but don’t actually get picked to appear. I hope to make it on before Alex Trebek retires in 2016.

So I’m the last one to criticize this icon of quiz shows, especially if it means I’d be booted at my next audition. But last spring, after one too many Georgias, I became obsessed with finding out if the "Jeopardy!" clues are truly gender-biased or if it was all in my boomer-feminist imagination.

I printed out a pile of blank charts with six boxes across and five down each, to represent the Single and Double "Jeopardy!" boards. I left space at the bottom for Final. Every night, I sat in front of the TV, pen in hand. For 18 episodes, I tracked every category and every answer. That’s 60 regular answers per show, for a grand total of 1,080. Out of those, I isolated the ones that could reasonably have either a male or female answer, like "Poets," "Comic Strip Characters," or "U.S. Senators." Of the 1,080 possible answers, a total of 251 fell into this category.

Now, here’s the kicker. Of those 251 possible answers, only 52 were female; 199 were male. That’s about 25 percent female to 75 percent male. (And that’s mostly white males. I didn’t even venture down the race road. That’s a whole other survey.)

For "Lines from Oscar Roles," I noted quotes from Gordon Gekko, Forrest Gump, Don Corleone, Jake LaMotta, and the stuttering King George VI. You’d think they’d come up with one female clue. What about Scarlett O’Hara’s "As God is my witness, I’ll never go hungry again," or Cher’s memorable "Snap out of it!" as Loretta Castorini in "Moonstruck"? And I didn’t even have to consult IMDb for those. In that same episode, guess how many women just happened to appear in a category called "Someone’s in the Kitchen"? Four out of five. (Uncle Ben was the fifth.) Ouch.

So who’s minding the "Jeopardy!" desk anyway? As it turns out, mostly men. Michele Loud (editorial supervisor) and Debbie Griffin (related to the creator, Merv?) are the only two women on the show’s current slate of nine writers. Suzanne Stone (research supervisor) is the lone woman among five men listed on the research team, according to the show’s website.

Now, one could argue that there are simply more famous men than women. Maybe I should accept that for centuries women were in the kitchen, whereas men were free to create stuff, explore places, and build things. You don’t hear much about Mrs. Columbus or Mrs. Debussy, come to think of it. So maybe it’s unfair to expect that women should be represented equally on quiz shows.

But what about categories where women easily come to mind? Like when "1960s TV" popped up one night, I instantly conjured Jeannie, Samantha, Gidget, Agent 99, Diahann Carroll, Mary Tyler Moore, Dinah Shore, and Donna Reed (I’m a boomer, remember). Instead we got a five-for-five male roster: Batman, the Grinch, "Bonanza," Maxwell Smart, and Dick Van Dyke.

I’ll give the writers points for naming Helen Keller and Betty Friedan as clues under "Phi Beta Kappa." But then, on the same board, under "End of Story," it was back to the boys: Hemingway, "Animal Farm," "Return of the King," "Around the World in 80 Days," and "Slaughterhouse Five." The total for that entire board? Two out of 15.

The next day, would there be redemption in "U.S. Novelists"? No chance. Harper Lee stood on her own alongside Mario Puzo, Sinclair Lewis, Horatio Alger, and Michael Chabon. And for "Pulitzer Biographies" on the same show? Zip. Nada. Not a one, although Eleanor Roosevelt was at least half a subject in Joseph Lash’s "Eleanor and Franklin." Couldn’t they toss a bone to Doris Kearns Goodwin? Duly noted: A few shows later, in "Bestseller Titles," Doris got credit for "Team of Rivals."

For "Quotes Filled with Booze," I guess I’m grateful no women showed up. "Diseases Named for People"? Think Parkinson, Hodgkin, Tay-Sachs. All men. Maybe Yvonne Barr of the Epstein-Barr virus could’ve snuck in for half a point? "20th-century Senators" went zero for five; ditto for "‘Good’ and ‘Bad’ Music." Those three categories appeared on the same Double "Jeopardy!" board on April 2, for a total of zero for 15. Double ouch.

The writers were more genderly generous with "Ivy League Alma Maters," tipping their scholarly hat to Queen Noor and Brooke Shields (Princeton), Jodie Foster (Yale), and Maggie Gyllenhaal and Anna Paquin (Columbia), for three out of five. Only two other three-for-five women-to-men results appeared during my survey period, including "I’ll Take Your Character," where we got Jane Austen, Hedda Gabler, and Cosette.

Here’s a twist: Under "Monograms of the Famous and Infamous," Joyce Carol Oates was dubbed a "prolific female author" (emphasis mine). Would the contestants have identified "JCO" without the gender cue? The week after my survey, a category called "Authoress! Authoress!" appeared. Is it progress or regression to have a special category for female authors? And who refers to women writers as "authoresses" anyway?

What about music, where women could surely share the spotlight? Of the 35 total music-related answers in my survey, a mere four and a half related to women (the half being a clue shared by Gwen Stefani and Maroon 5, for reasons I can’t recall). As for "Music Legends," all men.

I also created another category I called "gender specific," to track answers exclusive to one gender, like "Country Women," "U.S. Presidents" (so far, anyway), or "Batting Champs." I identified a total of 12 topics in this category over the 18 episodes. Just four of those 12 related to women, or 33 percent female to male. Among them, I was excited to see one named "She Did It," which included Sally Ride, Oprah, Elizabeth Dole, Gertrude Stein, and, you guessed it, good ol’ Georgia O’Keeffe.

All that was left to tally were the 18 Final "Jeopardy!" clues, six of which could have had male or female answers. Two of those six called for the name of a woman, or, again, about 33 percent, including "Anna Karenina" for "Classic Novels" and Eva Peron for "20th-century Names." Even Georgia didn’t make the cut in "Artists," ceding to Vincent van Gogh.

I stopped charting after 18 shows mostly because I hated getting so worked up. But I haven’t stopped watching. After nearly 50 years, I’m not about to abandon my love affair with "Jeopardy!," skewed gender balance or not. Would a survey of another 18 shows yield similar statistics? Maybe I’ll try again, now that the 30th season has kicked off. But in the meantime, I’d love to see more women on the board of the best quiz show ever. How about it, writers? Mary Cassatt for $1200?

Deborah Sosin is a writer, psychotherapist, and instructor at Grub Street in Boston. She is enrolled in Lesley University's MFA in Creative Writing program. Her website is www.deborahsosin.com.