Why Flynn is the real hero of "Breaking Bad"

Unlike Walt, Flynn understands that neither his life nor his body will ever be "perfect" 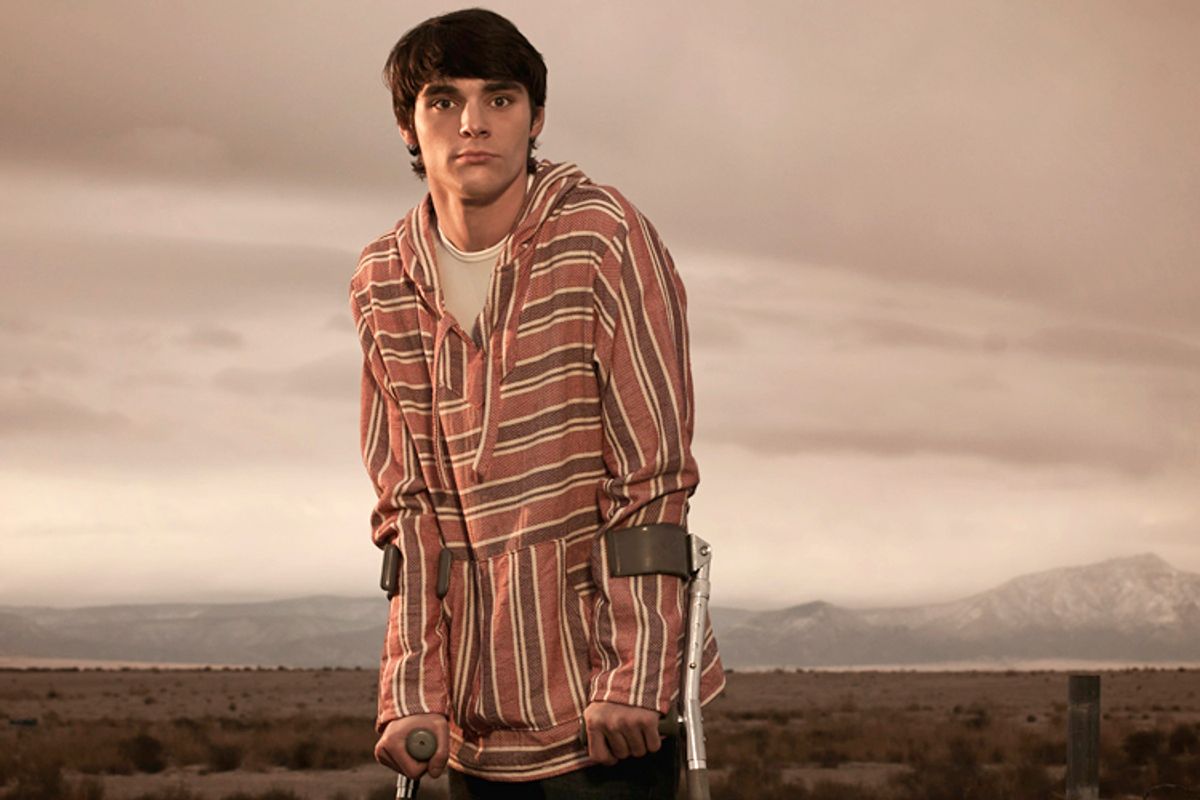 As Walter White squares off against Todd and his crew of white supremacists in the final season of "Breaking Bad," much has been made of Walt’s hubris as a symptom of white male privilege — his sense that he is owed a certain degree of power and adulation, and his anger that he has somehow been denied his due. Thus Walt’s showdown with neo-Nazis — who are really invested in the idea of superior bodies — offers a certain sort of poetic closure. I’ll take your white male privilege and raise you a reich.

There’s an even deeper sense of entitlement that shapes Walt’s world — and likely the world of the viewers.  It’s the deeply entrenched, and deeply American sense that we are entitled to bodies that function perfectly. Walter may well have been seething with resentment for most of his life, but it’s not until his cancer diagnosis that he makes his long descent into crime. Because it fades into the background for so much of the series, it’s easy to forget that it is illness, with its attendant specters of disability and death, that flips the switch that breaks Walter White bad.

Cancer, we tell ourselves with irrepressible American optimism, is what you make of it. As Skyler’s nightstand full of self-help books attest, cancer comes with its own to-do list, its own requirement that you take control of your endangered asset and regain a healthy body. Medical practitioners rightly applaud this sort of take-charge attitude. Self-efficacy, as it's called, is a prime indicator of a how well a patient will do. If patients can imagine useful steps, envision themselves taking them and then follow through, the odds of recovery are substantially higher. In the face of the uncontrollable chaos that cancer threatens, a plan and a cool head can, doctors often tell us, prevail.

Walt is far from the model patient. He is, however, a model of self-efficacy. He has a plan. Hoo boy, does he ever. The cancer, like all the other forces in "Breaking Bad," is brought to heel by Walt’s formidable will and intellect. Just a matter of showing that cancer who’s boss, it seems. And while Walter’s haughty dismissal of the killer disease might be a satisfying narrative (particularly for Walt), disability studies scholars have pointed out the flaws in the mind-over-matter model that Walter’s story seems to tell.

While being empowered is certainly important, insisting that we can apply a can-do attitude to all the body’s vagaries and ailments implies that living with less than perfection is just not an option. The implication is that if something is broken, it absolutely must be fixed. If you can’t fix it, then you just must not be trying hard enough. Walt’s decisions stem from a fundamental desire to be the one doing the breaking, rather than the one who has to live with the uncertainty of being perceived as broken.  Until his family pressures him to get medical help, he seems to prefer death to the dependency that he associates with chronic illness and disability.

Walter’s disdain for the weakness he associates with illness seems to insulate him as everyone around him deals with bodies that don’t do what they are told.  Skyler’s surprise pregnancy, Flynn’s cerebral palsy, Hank’s life-altering injury, and Jane’s misbehaving gag reflex all render them vulnerable to the man whose control over his environment is so complete that stage 3 non-operable lung cancer is no match for his badassery.

In the face of such superhuman control, Flynn’s disability in particular has likely always felt to Walt like one of the unfair strikes against the perfection he seems to think he’s due. Indeed one of Walt’s first transformative moments — often considered the birth of his alter ego Heisenberg — comes as he strikes out in rage against bullies who had been mocking Flynn’s need for assistance in a clothes store.

It is an undeniably satisfying moment when the nebbishy Walter White takes down the biggest of the bullies. With his newfound power, he can master his son’s disability, or at the very least the painful social responses to it. "What’s the matter, chief," he asks the bully as he grinds his heel into his leg, “having trouble walking?” The scene brings with it a sense of vigilante empathy. By impairing the bully’s leg, Walter gives him a taste of his son’s disability: He might as well be asking, “Do you want to feel what’s it’s like, punk?"

But Walter White’s flat-out run into the arms of Heisenberg is powerful testimony to just how badly he doesn’t want to feel what it’s like. His successful “battle” against cancer, his canny entrepreneurship, his ruthless empire-building, all reinforce the idea that a real man, a real American, makes it all himself, his body just one more tool in the arsenal he controls. Like the meth addicts his empire creates and destroys, he cannot tolerate the discomfort of living in an often-painful reality. Like an addict chasing that high that won’t crash, he convinces himself that after just one more scheme, one more death, he will have fixed everything perfectly.

I can’t help feeling that Walter White’s story — or at least the one he likes to tell himself — owes as much to the transcendentalists as to Tarantino. While Walter’s cabin in the woods evokes Thoreau’s Walden, and his initials disastrously evoke those of Walt Whitman, Heisenberg’s philosophy is perhaps best summed up by yet another of the transcendentalists, Ralph Waldo Emerson.  His famous essay "Self Reliance" explicitly divides the realms of self-made men from both children and the disabled:

And we are now men, and must accept in the highest mind the same transcendent destiny; and not minors and invalids in a protected corner, not cowards fleeing before a revolution, but guides, redeemers, and benefactors, obeying the Almighty effort, and advancing on Chaos and the Dark.

For Walter White, manhood means not just being a redeemer and benefactor (after all, he’s doing it for his family, right?) but a conqueror of the chaos and darkness that comes with being embodied, with being human. Walter’s sense of entitlement, which undeniably finds its purchase in having a white male body, also resides in the belief that only an able body is worth having. He, unlike those trapped within the realm of "minors and invalids," will accept only a body that doesn’t require thinking about at all.

So it is particularly fitting that Heisenberg is taken down by a crew of invalids and minors. Hank, still recovering from profound injury, undoes the meth kingpin by finding a book by the “other W.W.,” Walter Whitman. Within Whitman’s "Leaves of Grass" — the title itself a reference to the reality that we’re all going to wind up pushing up daisies someday — is the famous poem “Song of Myself,” a title that would likely appeal to a character who has had narco corridos sung in his honor, and who demands that even business associates sing his praises, or at least say his name. But anyone who knows Walt Whitman, and in particular his  “Song of Myself,” knows that Heisenberg couldn’t find a less complementary counterpoint. As a white man in the 19th century, Whitman revels in finding connection with those whose bodies render them subjects of disdain, of powerlessness, and exclusion:

Through me many long dumb voices;

Voices of the interminable generations of slaves;

Voices of prostitutes, of deform’d persons;

Voices of the diseas’d and despairing, and of thieves and dwarfs;

Voices of cycles of preparation and accretion,

And of the threads that connect the stars—and of wombs, and of the father stuff,

And of the rights of them the others are down upon;

Of the trivial flat, foolish, despised

Fog, in the air, beetles rolling balls of dung.

Walt, rolling his barrel full of dumb, useless cash through the desert, would have done well to listen to the other “W.W.” He is undone by the relics of man who wrote that the only “song of myself” that’s worth telling, the only one that has a hope of lasting, is the one that is about something other than yourself.

If Walt Whitman’s giddy embrace of the body’s imperfections set the scene for Heisenberg’s discovery, it is Walt Jr. who brings his career to a definitive end.  In Emerson’s terms, both a minor and an invalid, Flynn is the only character who never gets sucked into Heisenberg’s justifications, never becomes complicit in Heisenberg’s assurance that he can work it all out, never decides to keep the secret to himself to come out looking better in the end. In one of the show’s  most wrenching moments, Flynn ends the mad chase begun with Hank’s discovery of Walt Whitman’s poems by doing what Walter White was never able to do — he calls for help.

Flynn’s choice to ask for help is what dismantles Heisenberg’s plan to beat both death and the law. And it’s Flynn, whose disability has taught him that neither his life nor his body will ever be perfect, who squashes his father’s last-ditch scheme to send some money home.  “Why aren’t you dead already?” he screams at his sick and desperate would-be benefactor. Flynn’s brutal question asks out loud what he suspects strangers, bullies and likely his father have silently asked themselves about him. In a world that demands perfection, it's better to be a criminal than to be a supplicant, and for Heisenberg, it’s better to be dead than disabled. If Walter White, the great manipulator both of chemicals and of people, could have learned from the son he likely deemed a burden, he would have learned that living with brokenness is the only hope any of us have of beating back chaos and the dark.