Why Jefferson would like Pope Francis (but not Ted Cruz)

Promoting compassion and benevolence, the popular pontiff appears to share a mission with our third president 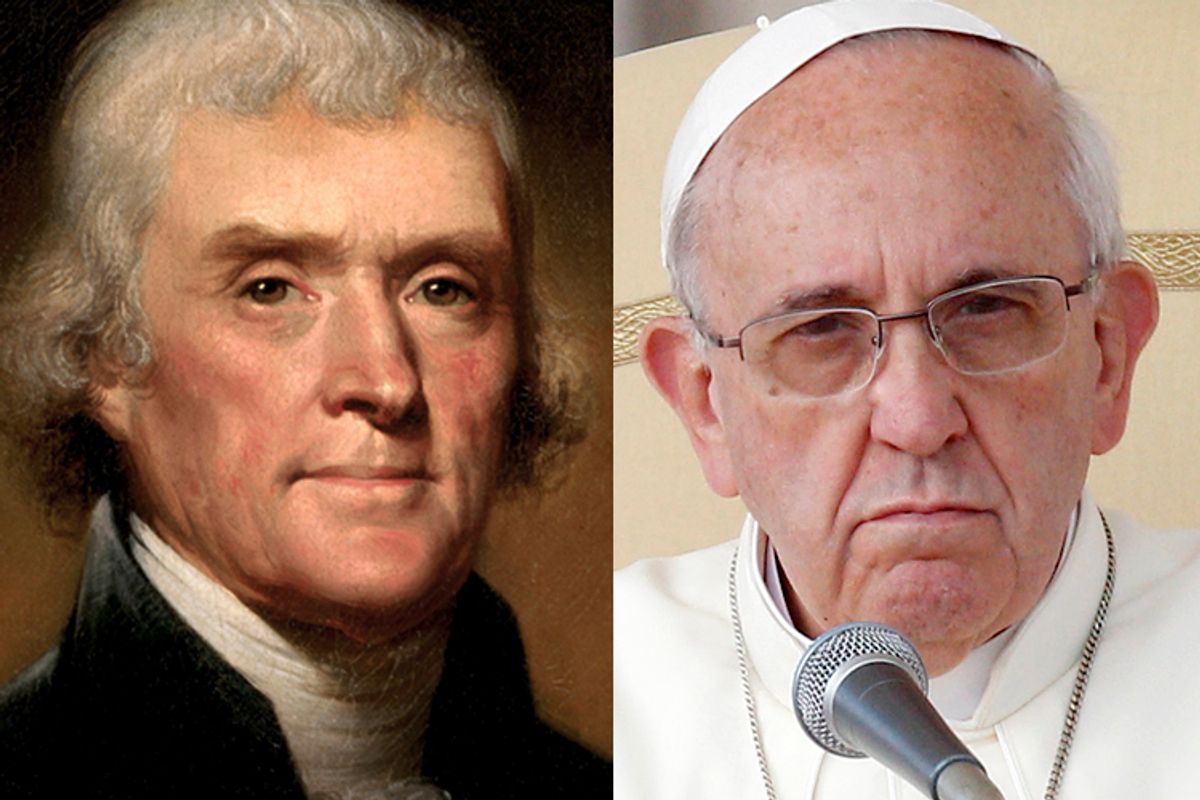 One way to put it, is that Pope Francis is a Jeffersonian. He spoke recently of those fellow human beings who stood about as far from Catholic doctrine as one could, the world’s nonbelievers, and he said he felt a close kinship to them: “Although not identifying themselves as followers of any religious tradition, [they] are nonetheless searching for truth, goodness and beauty, the truth, goodness and beauty of God. They are our valued allies in the commitment to defending human dignity, in building peaceful coexistence between peoples and in safeguarding and caring for creation.”

In his Notes on Virginia, in the 1780s, Thomas Jefferson conspicuously wrote that there was no harm in anyone proclaiming that “there are twenty gods, or no god.”

Ultimately, it’s about Jesus. In his love for the downtrodden, in his openness toward those who think differently, Francis has returned to the Jesus of the Gospels, particularly the Book of Luke. Which is where Thomas Jefferson largely found the Jesus he liked, too, when, for his own personal amusement as a retired ex-president, he cut-and-pasted the four Gospels so as to translate the good book into a fairly rational, morally conscious, miracle-free zone. All the Jesus fit to print, Jefferson-style: He pasted everything back together in parallel columns, in the four languages of English, French, Latin and Greek.

The popular pontiff, the first ever from the Americas, is again doing something very similar to Jefferson when he reactivates the Christian temperament prescribed in Luke. Francis’ primary mission appears to be to promote compassion. Jefferson’s political philosophy is laced with the concept of benevolence, though his 1786 dialogue between Head and Heart says it best: “This world abounds indeed with misery; to lighten its burthen we must divide it with one another.”

Jefferson tinkers, mixes and matches, and rearranges the text of his reframed Gospels, titling the whole, “The Life and Morals of Jesus.” Relying largely on the Books of Matthew and Luke, he emphasizes the ethical. Like Pope Francis, who refuses to disparage atheists, Jefferson preserved most of Luke 12 in his compilation, but notably deleted line 46, which threatens “unbelievers.” When he ran for president, he was hounded by conservatives for having written those words about “twenty gods, or no god,” and the even more “in your face” conclusion: “It neither picks my pocket nor breaks my leg.” Both Jefferson and Francis acknowledged that just believing something doesn’t make it right. Religion without humility is, to use another Jeffersonian turn of phrase, “tyranny over the mind.”

While Jefferson (surprise, surprise) had no position on LGBT activity, there is a larger point to be made about tolerance. Recently, Pope Francis told a Jesuit magazine – following up on his headline-grabbing embrace of homosexuals “of good will” --  that “religion has the right to express its opinion ... but God in creation has set us free.” For his part, Jefferson, America’s premier champion of the rights of conscience, wrote: “Bigotry is the disease of ignorance.”

Let’s get even more overtly political. When Jefferson lived, science was respected and multiculturalism was not seen – even by those politicians who protected the rich – as the polar opposite of that other litmus-test religion: American exceptionalism. Jefferson considered young America “the world’s best hope,” but he also imported the majority of his books from abroad. To respect those who aren’t exactly “like us,” to promote a sense of human community, is another of Francis’ Jeffersonian qualities. Yet before proceeding any further, we must underscore that Jefferson opposed religious hierarchy and identified most strongly with the liberal message of the Unitarians. More to the point, he decried those he called “pseudo-followers” of Jesus, rejecting all “vulgar ignorance of things impossible, of superstitions, fanaticisms, & fabrications.”

What Jefferson loved about Jesus is what Francis is channeling these days: “precepts of the purest morality, & benevolence, sanctioned by a life of humility, innocence, and simplicity of manners, neglect of riches, absence of worldly ambition & honors, with an eloquence and persuasiveness which have not been surpassed.” Our Jefferson certainly didn’t hold back. Just like the shockingly (so far) open-minded statements from the lips of the pope.

“Christianity is primarily a religion of invitation, and not simply an invitation to adhere to certain beliefs,” reminds Father Jim Martin of America magazine, in reflecting on his periodical’s exclusive interview with Francis. Embracing historical progress, Pope Francis says: “Let us think of when slavery was accepted or the death penalty was allowed without any problem. So we grow in the understanding of the truth.” Francis wants to find a way forward. “In pastoral ministry, we must accompany people and we must heal their wounds.” Jefferson – while ignominiously far from progressive on slavery – applied a compatible vocabulary whenever he addressed the “moral sympathies” as an instrument of policy in a democratic republic. In the age of sensibility, the soul found its fulfillment in commitment to a moral cause outside the self. By the way, in making it a priority to “heal wounds” and lift spirits at once, isn’t the pope talking about Obamacare? Try reading the parable of the Good Samaritan, in Luke 10.

“I am not one of those who fears the people,” said Jefferson when he was approximately the age as the current pope. “They and not the rich are our dependence for continued freedom.” Francis’ pastoral papacy promises a similar spirit of reform based on an identification with ordinary people, along with the man’s refreshingly authentic humility. Refusing to live in the more lavish papal apartment, Francis chose a simpler abode: “I cannot live without people,” he said.

“Woe unto you that are rich!” reads Luke 6:25, after proclaiming that the poor are blessed. “Ye cannot serve God and mammon”; and, we might add, ye cannot serve both God and the Koch brothers – the fattest of fat cats, who speak for today’s robber barons. Luke constantly attacks the greedy and self-indulgent, while Fox News is hard-pressed not to interpret Jesus’ message as class warfare. Francis chides “the cult of money,” as he calls it, and those who see economics in abstract terms, banishing the nameless, faceless poor from their thoughts. He’s talking to you, putative Catholic Paul Ryan, adorer of the atheist Ayn Rand. In the last publicly directed letter of his life, Jefferson wrote: “The mass of mankind has not been born with saddles on their backs, nor a favored few booted and spurred, ready to ride them legitimately, by the grace of God.” And all the while, our money says: In God We Trust.

As House Republicans, with callous indifference, cut food stamp benefits and conspire to defund Obamacare to deny the sick, are they doing God’s work? “We have failed to introduce the blessing of work to able-bodied people,” pronounces Florida congressman Steve Southerland, a mortician by profession. “Work works” is his childishly simple motto, and he believes he is doing the right thing by going after food stamp recipients. “God created Adam, and placed him in the garden to work it,” he said recently. Democratic leader Nancy Pelosi responded: “You can’t just come to church and pray on Sunday, and go out and prey on people the rest of the week.”

Then there is the narcissistic Ted Cruz, the scene-stealing Texas senator who graces his Capitol Hill office with a painting of his saintly performance before the Supreme Court. He’s the spitting image of Thomas Jefferson presenting the Declaration of Independence to the Continental Congress, as painted on a massive canvas by John Trumbull.

Cruz would be well-served to examine Madison’s warning against demagoguery in “Vices of the Political System of the United States.” Writes Madison: “How frequently will the honest but unenlightened representative be the dupe of a favorite leader, veiling his selfish views under the professions of public good, and varnishing his sophistical arguments with glowing colors of popular eloquence?” Touché. The oily arrogance of Cruz is yet another reason why the very appearance of Pope Francis embarrasses today’s Republicans and rips apart all they stand for. He dismisses vanity, without which Ted Cruz would be one of what the nation’s representatives were long ago called: public servants.

The pope drives around in his 1984 Renault, and demonstrates an unbanishable commitment to the poor. For his part, rather than sit in a lordly way in a chauffeured carriage, Jefferson rode to the Capitol astride his horse, unaccompanied, tying his steed to a post. As president, he famously dressed down, wearing old clothes while entertaining distinguished visitors at the president’s house in his bedroom slippers. We’re waiting for Pope Francis to deliver mass in jeans.