Gawker's "Privilege Tournament" is all about white anger

The site casts its "Privilege Tournament" as an above-it-all joke, but it's really an expression of deep resentment 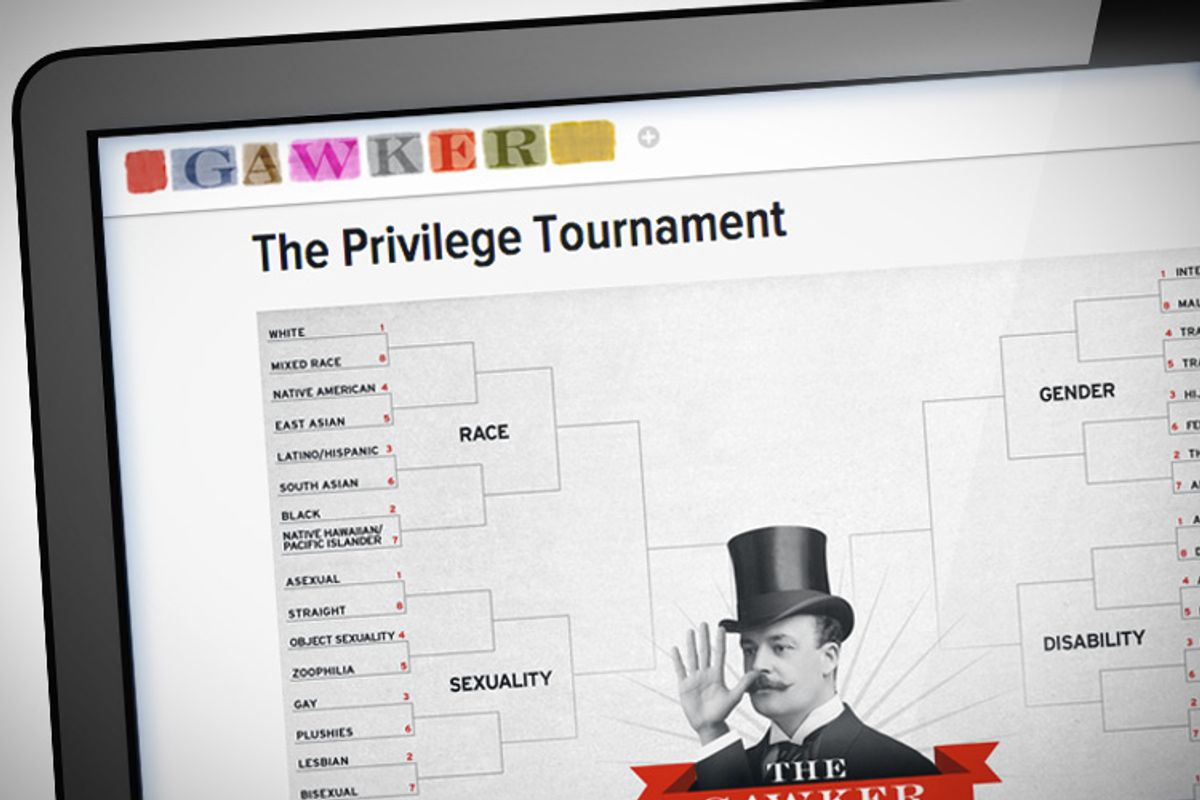 The most hurtful thing about Gawker’s “Privilege Tournament” (which invites readers to vote on NCAA-type brackets for who is the least privileged “category” of people, black, Hispanic, gay, etc.) is not its contempt for civil rights discourse, but that the prideful display of a white man’s humor is more important to a large liberal media outlet than compassion for people who suffer the dehumanizing effects of discrimination.  Gawker, of course, presents the Tournament as an above-it-all humor piece, and this is exactly the problem: Gawker believes it is speaking from a place of objective remove, but it is, in fact, acting out emotionally. The site is either willfully naive about the daily pain experienced by people whom society devalues or, worse, resentful that white men are being wrongly denied equal sympathy. Either way there’s nothing objective in this perspective.

Not only is white male humility in discussion of race/gender/sexuality absent here, but in its place is a vicious, sneering resentment at the suggested need to be humble. When a white man decides that a conversation about privilege has gotten out of hand, gone to absurd lengths, and needs some comedic cutting down, he is reestablishing white, male dominance, plain and simple. Who is asking who to laugh? Whose experience is being mocked?

There’s no doubt that author Hamilton Nolan and Gawker will defend the piece as comedy, but let’s be more specific:Tthis is satire, ironic social commentary that mocks an idea by taking it to an exaggerated level of seriousness.  Satire itself is deadly serious and it comes from real social critique.  So let me offer a modest proposal -- would Nolan or Gawker be willing to do this in person, I wonder? Would Nolan feel the gross absurdity of his game if standing face to face with people of color, women, LGBTQ people or those living in poverty? Would he be ready to say to them, as he writes here, “Privilege has its benefits, but the lack of privilege confers that sweet, sweet moral superiority.”

The “Privilege Tournament” is not just childish trolling. It is a shamefully racist, sexist, homophobic and classist attempt to silence large swaths of people. It is worth your criticism and it is worth your anger.

I say the Privilege Tournament is “hurtful” rather than idiotic, irritating or angering, because hurt in all its unsarcastic, undefensive glory, is where it begins and ends. A white man cannot mock a conversation about the daily struggle for inequality without revealing the bitterness that brought him to that particular humor, and the pain behind that spite.

This part I understand. The privileged, whatever privilege they may have, are human, and as humans they experience the pain, grief and trauma that time and space dish out to us all. All humans want to be seen, and heard. All humans want their pain to be acknowledged as real and legitimate. We all want compassion, empathy and understanding. If we don't get it, we often become resentful of those who seem to be receiving the compassion we all long for.

The satirization of those daring to see inequality is a classic move used by frustrated white men to derail discussions of inequality, humiliate the accuser, and reassert dominance. This conveniently places the accuser in the role of uptight, angry overreactor while the white male "objectively" decides on the appropriateness of emotional reactions. Ideas like the Privilege Tournament easily gain support because a door marked “playful” is far more appealing than one marked “serious,” and a lighthearted, sarcastic approach is most attractive to those least affected by the matter.

But still, Nolan and Gawker feel genuine pain. It is no less real than yours or mine. They feel frustrated that there seems to be no place for that pain, so they make a joke about the things that deny them humanity. As do we all. But the joke leads them even further away from the equality they so impatiently ask for.

The white male consciousness has long been regarded as the Default consciousness, unquestioned in the rightness of its objective analysis of all situations. Because we see the white male experience as the default experience, and whites as raceless, white males are not forced to examine their experiences or identities the way others are. Therefore they do not fully understand the roles that race, gender and sexuality play in their lives, and are left with pain and anger when prompted to acknowledge the advantages they receive. Imagine a toddler who doesn’t quite understand the emotions he's feeling.

Even as white males ask for sympathy, or display their frustration at not receiving compassion for the legitimate human suffering in their lives, they hold tight to the stick of privilege, using it to dominate other people's voices even as they ask those people for understanding.

That the Privilege Tournament exists should not be surprising, and still, I am always surprised when it happens anew.

And while the tournament may come from a place of true pain and frustration that many white men feel when asked to recognize their privilege, and while it may feel genuinely, or even exclusively, humorous to Nolan and some readers -- those who are experiencing the comic relief of pent-up tension given some air -- it ultimately comes from a dark, hard, reactionary place of entitlement.

True relief for the white male frustration that Nolan is tapping into will come only from more empathy, not less.